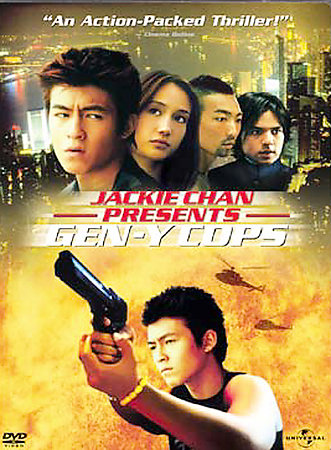 Part of the title of this sequel to GEN-X COPS (1999) basically summarizes the mindset of this film’s production: “Y”. In other words, why was this film ever made? The sham and shame of GEN-Y COPS’  June 2010, Universal Studios Home Video DVD reincarnation is the blatant title change to JACKIE CHAN PRESENTS GEN-Y COPS, as if Chan is actually part of the film, even though he  had nothing to do with the original 2000 release. But of course as the film starts, one of the beginning captions boldly reads “JACKIE CHAN” then a bunch of other companies followed by “Presents…blah, blah, blah.”
At least when Quentin Tarantino attaches his name as the presenter, he’s a fan of the film and ultimately he cares about it. Such is not the case for Chan and GEN-Y COPS. Chan’s goal behind GEN-X COPS and his NEW POLICE STORY (2004) was to promote young new male talents, not unlike the legendary Hong Kong kung fu film director Chang Cheh did in the 1970s. To Chan, these films weren’t about finding new martial arts talent; they were showcasing cute young men acting innocently rugged and tough. Yet GEN-Y COPS lacks this sensibility (if you can call it sensible) as director Benny Chan, who also directed the aforementioned two films, goes off in some awkward directions that I’m sure kept Chan the man away from the set, even if he couldn’t keep his name away from the credits.
If you think that this blatant misrepresentation of using an actor’s fame is a sophomoric stunt to sell a film, that’s nothing compared to the movie’s mainstay. This would be the elite trio of men – Edison (Edison Chen); Match (Stephen Fung); and Alien (Sam Lee)) – a triumpherant of cops touted to be the best of the best, who take on only Hong Kong’s toughest cases, while looking like bratty kids in their 20s and guffawing and gabbing like a trio of adolescent teens. What would be adding to the grandeur of flummery is that these kids (I mean “young adults”) are speaking with Afro-American English-like dialogue, as if mimicking Caucasian rural kids having a racial identity crisis.
In a sort of sublime homage, GEN-Y COPS is a cross between Tsui Hark’s female robot romp I LOVE MARIA (1988) and ROBOCOP 2 (1990), except that the American-made RS-1 killing machine goes awry with “d-roid” rage at the hands of inventor Kurt (Richard Sun), who uses the bashing bot for bad because Kurt feels he was debased by the FBI.

Combine the Gen-Y lads with some Gen-XY cops (yes, females); mix in black and white, good and bad FBI agents; then add one Achmed, a Middle-Eastern baddy who wants the android avenger to destroy the infidels – and we have a recipe for stereotypical characters and an archetypical ending that reeks of low budget, weak script and eked out action.
From the action director of Jackie Chan’s PROJECT A II (1987), Nicky Li Chung-chi, one would expect that 13 years later he would be a better fight choreographer. Unfortunately, 13 is an unlucky number in the West, and in a film choc full of Westerners, it’s lucky for us that GEN-Y COPS has only 11 fights with a total screen time of 2 minutes and 38 seconds. Hmm, does this sound action packed to you?
Apart from shooting the fights from close angles – an attempt to hide that the handful of cool techniques and kicks are wire-enhanced – Li and his fight choreography crew made the fights “last longer” by shooting them at 24 frames per second (normal camera speed). If Li had shot them at the typical, Hong Kong fight speed (18–22 frames per second), each fight would have been even shorter.
With a running time of 109 minutes, the DVD can be viewed in English or Cantonese. Including closed-captioned for the hearing impaired, the single disc also has English, French and Spanish subtitles. Bonus materials include Talent Files (all about Jackie Chan), Theatrical Trailers, a “Making Of” documentary, and Deleted Scenes.
Perhaps if this movie was a 1950/60s Disney Film wherein we expected over the top teen-adult characterizations from the likes of Kurt Russell, Dean Jones and Hayley Mills, GEN-Y COPS might have garnered a foul ball home run, landing in a limbo where there exists a sort of Jackie Chan-esque “50-year old virgin in front of females” kind of mentality. But alas poor Yoric, this Hamlet is a cinematic omelet with egg on its face. Thank God for no GEN-Z COPS.
JACKIE CHAN PRESENTS GEN-Y COPS (2000). Directed by Benny Chan. Written by Chan Kiu-ying, Felix Chong, Bey Logan. Action direction by Nicky Li Chung-chi. Cast:  Stephen Fung, Sam Lee, Edison Chen, Maggie Q, Christy Chung, Rachel Ngan, Richard Sun, Paul Rudd, Mark Hicks, Jude Poyer, Anthony Wong, Reuben Langdon.