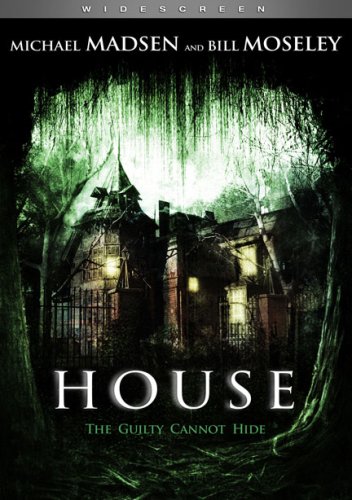 There’s a potentially interesting idea at the center of HOUSE, an attempt at a psychological horror film directed by Bobby Henson and based on an apparently well-regarded book by Frank Peretti and Ted Dekker. HOUSE follows a married couple, Jack (Reynaldo Rosales) and Stephanie (Heidi Dippold) whose car breaks down on the way to a much needed marriage counseling session. Stopping in a foreboding-looking hotel to use the phone, they run into another young couple, Randy (J.P. Davis) and Leslie (Julie Ann Emery) whose car had also broken down along the same stretch of road. The motel is run by the very Nurse Ratchet-looking Betty (Leslie Easterbrook) and her immediately unnerving sons, Stewart (Bill Moseley) and Pete (Lew Temple). Just as the two couples are about to do the sensible thing and run away, a masked man whom the hoteliers calls the Tin Man appears outside the front door with shotgun in hand, demanding that one dead body be delivered to him by dawn.
We’ve mentioned before that, perhaps unwisely, we make certain concessions when it comes to-low budget horror films. We’re more forgiving of bad performances, weak scripts, and poor effects if the filmmakers’ heart is in the right place. For the record, and in spite of all indications to the contrary, we gave HOUSE the benefit of the doubt for a full third of its mercifully brief running time. We ignored the utterly obnoxious lead characters, the narrative thievery from other movies that aren’t even very good themselves (since studio Lionsgate also produces the Saw series, litigation is unlikely) in the hopes of getting to the story pivot point – the moment when we learn why these people have been brought to this motel in the middle of nowhere – so we can make a determination as to whether or not it’s even worth continuing.
Throughout the ’60s and early ’70s, Amicus Productions was the only real competition to Hammer’s lock on UK horror. Their “hook” was the omnibus feature, horror films consisting of a group of strangers gathered together – either on a train (Dr. Terror’s House of Horrors), a circus (Torture Garden), an antique shop (From Beyond the Grave), or most famously, a cemetery crypt (Tales from the Crypt) – and have a mysterious stranger reveal their respective futures – which typically includes death. The key to most of these stories is that the individuals typically have dark sins in their past, and their elaborate deaths arrive in the form of retribution. While it’s probably a relief that HOUSE is actually borrowing elements from these films rather than being yet another Rob Zombie rip-off, it doesn’t make the execution any more palatable. The main couple, Jack and Stephanie, are so unlikeable from their first moments onscreen, that even learning of the guilt and blame that both are harboring about the recent drowning death of their daughter does little to engender any sympathy.
Compare this to the nifty little thriller, Vacancy, in which Kate Beckinsale and Luke Wilson play a married couple victimized by similar guilt. That film at least understood that we needed to want to see the couple survive, and took pains to make sure that the audience cared about their fate. It’s a bad sign for HOUSE that you just want to see the main actors fall into a hole and never come out.
Moreover, HOUSE waists the considerable talents of both Easterbrook and Moseley, though at least she’s given a genre stereotype to play, while Moseley gets nothing to work with at all. Which brings us to what is ostensibly the film’s star attraction, top-billed Michael Madsen (though in the actual credits he receives the far more appropriate “and…” billing). Ever since Quentin Tarantino and Robert Rodriguez finally destroyed the compromising photos Madsen must have been holding for all these years, the actor has been forced to navigate the tricky DTV waters on his own. He plays the Sheriff who directs the travelers towards the fateful hotel at the beginning of the film, and plays him in such a way as to guarantee his reemergence at an inopportune moment later in the running time. Madsen’s role is important, but smallish; and anyone fooled into renting the film thinking otherwise is unlikely to be amused. As for us, we never understood the need for Madsen in a world where Tom Sizemore already roamed free. The two actors always played similar roles, but while Sizemore brought authority and charisma to his parts, Madsen brought only affectation and offensive posery (just imagine how much more interesting Reservoir Dogs would have been with Sizemore as Mr. Blonde).
The good news is the gorgeous image presented on the DVD; all too typically, the transfers of low budget horror films can be highly problematic, but HOUSE features a beautifully saturated transfer that adds millions in value to what must have been a meager budget (at least we assume that several large continuity gaffs, like the entire crew reflected in Madsen’s shades for several minutes, was the result of a rushed shoot). Equally surprising is the lack of any extras (at least on our copy) save for several minutes of ‘sneak peaks’ of other Lionsgate titles.
HOUSE (2008, DVD release 2009).  Directed by Robby Henson. Screenplay by Rob Green, co-writer Frank Peretti, based on the novel by Ted Dekker and Frank Peretti. cast: Michael Madsen, Reynaldo Rosales, Heidi Dipold, Julie Ann Emery, J.P. Davis, Lew Temple, Leslie Easterbrook, Bill Moseley, Pawel Delag, Weronik Rosati.