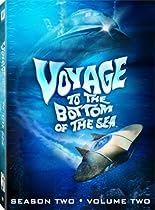 American Life TV, which targets aging viewers with fond memories of the ’60s, has purchased the rights to four science-fiction television series produced by the late Irwin Allen: VOYAGE TO THE BOTTOM OF THE SEA, LOST IN SPACE, THE TIME TUNNEL, and LAND OF THE GIANTS. Beginning September 6, the shows will air on Thursday night, starting at 8:00pm.
Unlike Gene Roddenberry, Allen conceived of science-fiction mostly as an excuse to provide a Monster-of-the-Week show. Speculative fiction author Harlan Ellison even coined the pseudonym “Cordwainer Bird” in order to avoid screen credit for his work on VOYAGE TO THE BOTTOM OF THE SEA, and actor David Hedison (who starred as the Seaview’s Captain Crane) suggested, in an interview on the DVD box set for the show’s second season, that VOYAGE would have lasted longer if Allen had not over-emphasized the monsters.
Personally, I’ve always had a fondness for VOYAGE because it aired at a time when I was just young enough not to see how hokey it was. I remember being devastated when it went off the air, and when it returned in re-runs years later I was buzzing with excitement over the opportunity to revisit my childhood favorite – until I actually watched an episode!


Forget about an adult perspective – even a junior-high-school perspective is more than enough to spot the leaks in the structural integrity of the stories. What struck me most was the unapologetic artificiality of the series, where anything could happen just because…well, just because. To cite one example, this was the kind of show wherein characters would get bashed on the back of the skull with a plumber’s wrench, then wake up moments later with nothing worse than a mild headache – usually returning immediately to duty, rather than visiting sick bay. Apparently the crew of the Seaview was virtually imprevious to cranial concusions.
Revisiting the show more recently on DVD, the formulaic nature of the stories is even more apparent, and Allen had a penchant for creating episodes that could utilize stock footage from feature films (including his own dino-epic THE LOST WORLD, not to mention the theatrical version of VOYAGE). Still, there is something intriguing about the design of the submarine Seaview, and every once in a while a memorable image or dramatic moment emerges (e.g., the ghostly U-Boat and her dead captain in “The Phantom Strikes”).
The appeal of VOYAGE and Allen’s other series lies in this kind of nostalgia value; people who saw them growing up may enjoy revisiting them, but it is unlikely that they will win many new converts, so American Life TV seems like the perfect home for them. For myself, I don’t think I’ll be tuning in too often, but it is nice to know that the Seaview’s voyage continues on screens somewhere.