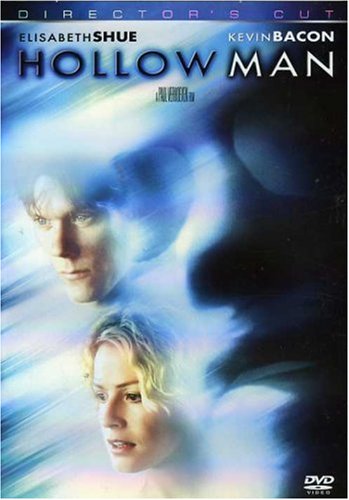 Sadly, this is one of Paul Verhoeven’s directorial mistakes. It begins with an interesting premise (how does invisibility—and with it, the ability to get away with anything) warp the moral sensibility? Unfortunately, the screenplay confines the action mostly to an isolated research facility and uses the idea only as an excuse for gratuitous special effects and violence. This might have been acceptable (if not admirable) had the director delivered an exciting action movie; unfortunately, HOLLOW MAN falls flat on its blank face. There is lots of stumbling about (and screaming and shouting and bloodletting), but the film never works up a visible head of steam.

Kevin Bacon stars as the titular scientist whose secret government experiments render him invisible. The opening act effectively establishes the arrogance of the character, who also displays a penchant for voyeurism; unfortunately, the character’s moral deterioration (once invisibility allows his latent anti-social tendencies to surface) takes a back seat to the invisibility scenes. The result is an old-fashioned “mad science” story about somebody who comes to a bad end because his experiments went too far.

The actors end up trapped in a hopeless scenario. Bacon does a good job (even limited mostly to his voice), first at establishing the character and then at creating fear, but even so, he can’t keep the character believable while the script is bouncing around from special effect to special effect. Elizabeth Shue and the rest of the cast are Hollywood versions of scientists, young and beautiful, but they try awfully hard before the script finally defeats them. By the end, they’re not better off than the cast of a FRIDAY THE 13TH movie, just waiting around to be impaled or bludgeoned in the bloodiest manner that the director can imagine.


There have been many invisible man movies featuring amazing special effects (including MEMOIRS OF AN INVISIBLE MAN, the previous high-water mark for visuals of this kind), but the computer-generated imgery in HOLLOW MAN outdoes them all. Especially impressive is the manner in which the presence of Bacon’s character is always maintained, whether he is visible or not. Bacon was filmed on set with his fellow actors, wearing green make-up and skin-tight costume, which allowed him to be digitally removed in post-production. This creates some genuinely eerie scenes of his invisible form outlined in smoke or silhouetted like an air bubble in a swimming pool, with the actor’s expressions clearly visible.
However, this technical tour-de-force fails to keep the character center stage the way he should be if the film is to work as anything more than a special effects showcase. Instead, the third act degrades into dumb action when the Hollow Man decides to kill his research team to keep his invisibility a secret. The film becomes into a slasher-thriller in a lab facility, while the endangered characters mutate from scientists into moronic victims or tough-talking heroes (“We’re going to put him down,” Elisabeth Shue growls, channeling Nick Nolte and/or Sylvester Stallone). Things turn ridiculous (one victim is casually dismissed with an off-hand “he’s dead” before he’s barely gasped his last breath). Like Michael Myers, Jason Voorhees, and Rasputin, the villain gets killed—and killed again—but keeps coming back—because that’s what’s supposed to happen in this kind of movie, and who cares whether it makes any sense?
Paul Verhoeven has made great films like THE FOURTH MAN, ROBOCOP, and STARSHIP TROOPERS; however, even some of his box office successes (TOTAL RECALL, BASIC INSTINCT) show signs of diminished intelligence, and he is cluelessly completely capable of churning out junk like SHOW GIRLS (apparently without any concept of how ridiculous the film is. His stock in trade seems to be pulverizing visceral impact (dumping a crook in toxic waste, dismembering a starship trooper in the jaws of an alien bug). When working from a solid script, he can create a film with jolts and shocks that have a genuinely disturbing edge; when working from a lame scenario, Verhoeven just plows ahead indifferently, and you’re left with an ugly mess. HOLLOW MAN definitely falls into the later category. That’s too bad, because it should have been so much more. 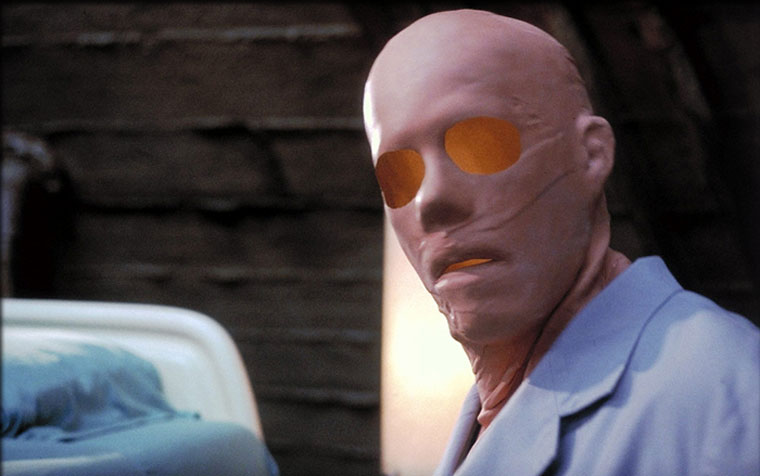 The film contains a demarcation point that establishes where the story starts to go downhill (although in retrospect the hints were there all along). After that, there’s nothing to do but sit back and watch the crash-and-burn as the movies degenerates into nonsense that elicits laughter rather than screams.
Midway through the story, the Hollow Man escapes from his lab for a night out. He sees a beautiful woman (Rhona Mitra) undressing in the apartment across from. Whereas his visible self had to wallow in sexual frustration earlier in the film, now that he’s invisible he can act on his urges, sneaking undetected into her room. The scene is Verhoeven at his sleaziest and most effective, provoking a complex series of reactions: you know Bacon’s scientist shouldn’t be doing what he’s doing, but you want him to proceed so you can see what happens; you feel guilty for watching but you don’t want it to stop; you hope for hint of characterization to be bestowed upon the woman—anything that will make her something more than just a sex object—but you know that would take the film into the realm of genuine suspense and ruin the vicarious thrill of the male adolescent fantasy being played out.
The Overlook Film Encyclopedia of Horrorpraises director Mario Bava for turning the masked killer in BLOOD AND BLACK LACE into a “faceless representative of the male spectator as he stalks” and kills a series of helpless women, with “no comforting resistance for projective identification…” Verhoeven takes this approach a quantum leap higher; with his unseen stalker literally invisible, there is no on-screen menace left to see, leaving only viewers in the audience. If the point is to show how nearly irresistible the temptation would be, the scene succeeds—up to the moment when the camera swoops in on the screaming woman.

After that, the film cuts away, and we never find out what happened next. There is a line in which the Hollow Man admits to “scaring” the unfortunate woman, but we have no reason to believe that’s all he did. It’s nice not to have to sit through what the film seemed to be building up to (a brutal sexual assault, maybe even murder), but why waste five minutes on a set-up if you’re not going to deliver the punch line? (At the time of the theatrical release, those involved in making the film insisted that no “invisible rape” scene had been shot; according to the Internet Movie Database, a longer version was tested for audiences, who objected that it showed the Hollow Man turning too evil, too quickly.)
This omission hurts the film because it is the first sign of the Hollow Man emerging madness—his initial step from being an anal retentive control freak to being a monster willing and even eager to throw away not only his career but his previous identity in order to act on his selfish impulses. The audience should know (if not see) how far he goes at this point, because it sets up later events. Hiding the fate of the woman clouds Bacon’s character from us. Having lost track of his descent, we are no longer watching a story about a man slowly losing his soul; we’re simply in for a long, bumpy special effects ride.
(NOTE: This footage is restored in the “Director’s Cut DVD.”)

One thing you would never call Paul Verhoeven as a director is “subtle.” Even his early European films like THE FOURTH MAN contained their share of graphic imagery gouged eyeballs, to site one example) meant to shock you out of the complacency often produced by high-tone art house offerings. After moving to American, he made numerous films loaded with violence (ROBOCOP, TOTAL RECALL, STARSHIP TROOPERS), sex (SHOWGIRLS), or both (BASIC INSTINCT). Consequently, he has had his share of run-ins with the MPAA (except for SHOWGIRLS, which went out with an NC-17, all his English language films have been recut to get an R-rating), and he is no stranger to controversy.
His 2000 film, HOLLOW MAN, takes the traditional invisible man concept and gives it a modern interpretation, emphasizing the potential for voyeurism and sexual stalking. In it, Kevin Bacon plays a scientist who manages to render himself invisible. Isolated from his colleagues by his condition, he soon finds himself unable to resist the temptations it provides. Advance word from people who read early drafts of the script, coupled with comments from Bacon himself (who calls his character, half jokingly, “Horny Man”) led some to wonder whether the film would be an over-the-top exercise in misogyny, yet the film sailed through the Motion Picture Association of America’s ratings board with R. Although we now know that the Rhona Mitra scene was trimmed, at the time of the film’s release, Verhoeven claimed there had been no recutting in order to appease the ratings board. 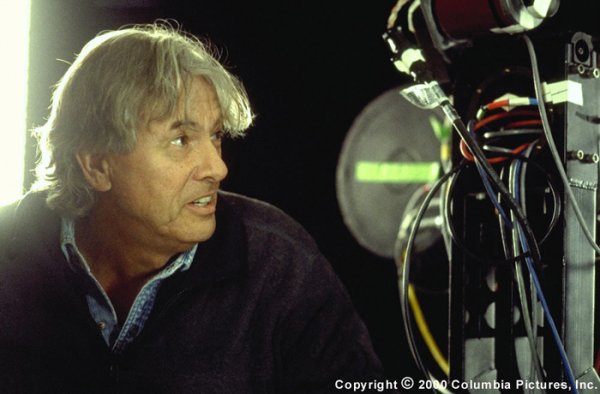 “No,” he said. “I got a straight R. I gave the movie to the MPAA and got an R. It’s the first time in my life. All my movies have been called X or NC-17. It was X when I started here: FLESH AND BLOOD, ROBOCOP, and TOTAL RECALL all got an X. Then BASIC INSTINCT, SHOWGIRLS, and STARSHIP TROOPERS got NC-17. It’s still an R; it’s not a PG-13, and I couldn’t make it a PG-13. The muscular body, and the way he is sometimes expressed in certain forms, is too scary for a PG-13. He is sometimes seen in layered form, and certainly during the transformation he is mostly of course layered, in between. Later, he is seen in layered forms or muscular form. So it’s disturbing.
Verhoeven explained the “casting” of composer Jerry Goldsmith (instead of usual musical collaborator Basil Pouledouris):
“First of all, I think he’s great. Somehow I felt it was a bit more…there’s a lot of this sliding scale things where the atmosphere is slowly changing. I felt it’s what Jerry can do in the most beautiful way because he can nuance the orchestra so that little instrumentations give just a touch of change. Basil, I feel, is much more for broad brushstrokes, like when he writes for ROBOCOP or STARSHIP TROOPERS. Broad strokes, a bit orchestra, a lot of horns and trumpets and all that stuff. I think his best scores, which he did for CONAN and ROBOCOP, have that kind of visceral quality. I felt that this was more BASIC INSTINCT-oriented, because it’s a really slow buildup, from scientific work that has a fantasy quality to it, to more and more fear that it might be evil and then knowledge that it is going to be evil. So it felt that way.
“In fact, I have always been working with two d.p.’s. Joss Vacano and Jan DeBont. Jan DeBont is not available anymore, unfortunately, because I have a feeling I can express myself much better to the left than to the right, because Jan would be better at one way of shooting and Joss would be the other way of shooting, so I was able to use Jan for one kind of movie and Joss for another kind of movie. I’m really looking for another d.p, next to Joss, that can do the other kind of thing, someone that is more Jan-oriented. Jan is more to the red, and Josh is more to the blue. Josh is much colder; Jan is much warmer. That works for certain movies in a good way and sometimes in a bad way; then you want to change.With Jerry, it’s the same way. Jerry would be perfect for this, and Basil would be perfect for that.”
HOLLOW MAN (August 4, 2000). Directed by Paul Verhoeven. Written by Andrew W. Marlowe, story by Marlowe and Gary Scott Thompson. Cast: Elisabeth Shue, Kevin Bacon, Josh Brolin, Kim Dickens, Greg Grunberg, Joey Slotnick, Mary Randle, William Devane, Rhona Mitra.
Original Copyright 2001 by Steve Biodrowski; revised in 2007