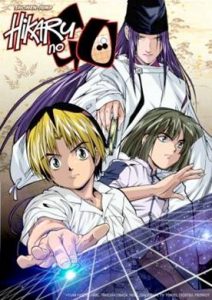 VIZ Media has announced the availability of the anime series HIKARU NO GO and MÄR for Download-To-Rent / Download-To-Own (DTR/DTO) from leading online content providers iTunes, PlayStation® Network, and Amazon Video on Demand.
The complete series for HIKARU NO GO (Episodes 1-75) and MÄR (Episodes 1-52) will be presented dubbed and uncut, and will be available immediately from the iTunes Store in the U.S. (www.iTunes.com) and Canada (www.iTunes.ca). As a special promotion, Episode 1 from each series will be available for FREE download through August 23, 2011!
Amazon Video on Demand and the PlayStation® Network video delivery service, available exclusively for the Sony PSP® (PlayStation®Portable) and PlayStation®3 (PS3™) entertainment systems, will offer Season 1 of HIKARU NO GO and MÄR, beginning with Episodes 1-3. New installments will be released every Monday. Episode 1 from each series will be available for FREE download through March 22, 2011.
All episodes are $0.99 each for Download-To-Rent and $1.99 for Download-To-Own across all platforms.
HIKARU NO GO is a unique story that revolves around the ancient Japanese strategy game of Go, and is based on the manga written by Yumi Hotta and illustrated by Takeshi Obata (also published domestically by VIZ Media). Hikaru Shindo is like any sixth-grader in Japan: a pretty normal kid with a two-tone head of hair and a penchant for antics. His life completely changes when he finds an old bloodstained go board in his grandfather’s attic. The ghost of an ancient go master named Fujiwara-no-Sai was trapped in the board and soon becomes a part of Hikaru’s consciousness. Together Hikaru and Sai make an unstoppable go-playing team!

MÄR is based on the hit manga series by Nobuyuki Anzai (creator also of FLAME OF RECCA), published in North America by VIZ Media. An ordinary middle-school boy with an overactive imagination, Ginta Toramizu dreams about fairy tales and make-believe lands. One day at school, a gate appears and he enters the World of MÄR, the world of his dreams. Within the World of MÄR exist ÄRM: accessories with unique powers. Soon, Ginta stumbles upon Babbo, an ÄRM that can speak, and learns that he has been summoned to this mythical world to stop the Chess Pieces, a group of rogue soldiers, from destroying the World of MÄR. Now part of Team MÄR, Ginta and Babbo fight in War Games against the Chess Pieces to save the MÄR World. But will Ginta’s mission be compromised by his ally’s secrets?
For more information on the HIKARU NO GO and MÄR anime and manga series, you can  visit VIZAnime.com.