When Richard Matheson’s novel Hell House came out in 1971, its fusion of traditional haunted house elements with explicit sex and violence was quite shocking, as most horror novels prior to William Peter Blatty’s The Exorcist avoided graphic material in favor of suggesting the shudders. While not up to the high standard of Shirley Jackson’s The Haunting of Hill House yet clearly inspired by it, Matheson’s book attempted to become the ultimate “haunted house” tale, incorporating a number of psychic phenomena that had not been previously combined into one ghostly story.
When James Nicholson, co-head of American International Pictures, split from Samuel Z. Arkoff to create his own company, Academy Pictures, he selected Matheson’s novel to be the basis for their first feature, THE LEGEND OF HELL HOUSE, and he hired Matheson (who had scripted many of AIP’s Poe-inspired films starring Vincent Price) to adapt his novel into a screenplay. Unfortunately, executive producer Nicholson passed away while the film was in production, and it was sold to 20th Century Fox.
The early ‘70s had seen the development of more explicit horror films such as THE VAMPIRE LOVERS, which introduced nudity and lesbian to the mass market horror film; however, horror films were still sold mostly to teens, so Matheson scaled back much of the sexual element in his novel to allow the film version to garner a PG-rating. (He also expressed concern in a Cinefantastique interview that in the then-new era of openness, equating sex with evil acts would be laughable, though a key element of his story condemns not sexual per se, but sexual repression).
Amusingly, THE LEGEND OF HELL HOUSE opens with quotation on the reality of the psychic phenomena depicted attributed to Tom Corbett, a known “space cadet” (one of Matheson’s sly jokes). As in his classic novel I Am Legend, Matheson takes the trouble to look up scientific terms but not to understand them. Hence, the energy is described as electro-magnetic radiation, or in other words radio waves, microwaves, terahertz radiation, infrared radiation, visible light, ultraviolet radiation, X-rays and gamma rays, which are all types of EMR and have nothing to do with souls, ghosts, or spirits.


The story’s premise is fairly simple: An elderly man worried about his imminent demise hires a parapsychologist physicist Lionel Barrett (Clive Revill) and two mediums, Benjamin Fischer (Roddy McDowall) and Florence Tanner (Pamela Franklin of THE INNOCENTS), to investigate the Belasco residence (known as “Hell House”) and report back proof, if any, on the existence of life after death. An expedition some 20 years before to this “Mount Everest of haunted houses” had resulted in the destruction of all participants by madness or death, except for Fischer.
Hell House represents a self-contained world, one in which, as Fischer points out, the windows have been blocked up to keep anyone from peering in on the socially unacceptable goings-on inside. Years ago, it was inhabited by a wealthy eccentric named Emeric Belasco (Michael Gough, appearing uncredited), a character Matheson based on Aleister Crowley. Belasco is described as a man who encouraged others to experiment with debasement and debauchery, leading to a long list of crimes against humanity (“Drug addiction, alcoholism, sadism, bestiality, mutilation, murder, vampirism, necrophilia, cannibalism… not to mention a gamut of sexual goodies”) which are mentioned but never actually depicted in the film version.
To ramp up a sense of verisimilitude, in both the novel and the film, Matheson divides sections by identifying a specific date and time when each incident takes place. This is a device that was later borrowed by Stanley Kubrick for THE SHINING. Unfortunately, at least in one instance, a stock daylight shot of the Belasco exterior is shown while the caption indicates night time event.*
THE LEGEND OF HELL HOUSE is the first ghost film, I believe, that depicts the phenomenon of ectoplasm, which we see emanating from the fingertips of Tanner, who is supposed to be a mental medium, unlike Fisher, who is a physical medium. In other words, spirits speak through her, whereas Fisher manifests observable phenomena. However, this distinction breaks down, as there is more than enough telekinetic and poltergeist activity on display for each medium. Despite the budgetary limitations, this is a very active haunting, and the sense of anything can happen at any moment aids in greatly enlivening the film.
On the other hand, in adapting his work to film, Matheson has shortchanged his major characters. While Roddy McDowall is very enjoyable playing the closed-off “only in it for the money” Fischer, Benjamin is more heroic in the book. There, he rescues all of the other characters at one time or another — saving Tanner during an attack, pulling heavy equipment off of Barrett, and keeping Barrett’s wife Ann (Gayle Hunnicutt) from drowning in a nearby tarn during a sleepwalk. Most of the scenes of Fischer aiding the others have been omitted from the film version.
Another crucial change is that the novel’s Barrett is somewhat crippled. He is a skeptic eager to prove that a machine he designed can dissipate the negative energy in the house and stop all the haunting; Hell House represents his opportunities to put his machine in action.  It is clear in the novel that Barrett has developed a life of the mind, but has neglected the physical side of life, including his sex life with his wife. The very fit Revill seems miscast for the part as originally conceived, though he ably limns the character’s arrogance and cocksuredness as well as his dismissive way with his colleagues.
In the book, Ann clearly loves her husband, but longs for the intimacy that has been denied her. This makes her susceptible to Belasco’s libidinous influences, and so she throws herself sexually at a shocked Ben Fischer, and when he rejects her advances, seeks sexual solace from an unequally uninterested Tanner as well, a lesbian come-on scene the film omits entirely.
Florence’s part is diminished as well. She comes to believe that the ghost attacking her is that of Daniel Belasco, Emeric’s son, who reminds her of her late brother, who was forced to do the bidding of others. Believing she has found Daniel’s body, she buries it, hoping to put his spirit at rest, but such is not to be. She generates the theory that Belasco is like a general who can force other spirits in the house to do his bidding while he keeps himself behind the lines. Unfortunately, without having sketched in the background as to why she is so vulnerable to “Daniel’s” influence, she instead comes off as incredibly credulous and reckless, rather than as a participant who picks up a piece of the overall puzzle.
One of the most horrific scenes in the book comes off quite muted as well. Florence makes the mistake of allowing the spirit of Daniel to make love to her. (In the book, the spirit even sodomizes her in the shower). Instead of transitioning Daniel to love and peace hereafter, she gets abused and discovers herself making love to a corpse, leading to a particularly horrific entendre when she tells the others that Daniel is “in her.”

There is a mystery to be solved here, and Belasco’s duplicity must ultimately be uncovered. Matheson does leave visual clues as to the source of Belasco’s anger and frustration in each of the attacks he makes on the “guests” in hell house. While not as flashy as modern-day ghost stories, LEGEND takes the time to build up character and unease before unleashing its horrors, so that we care about the people these phenomena are happening to and have an emotional investment in hopes for their survival.
LEGEND OF HELL HOUSE is a well-crafted low-budget effort, but it lacks the superior story, characterization, scares, and performances of the Robert Wise classic THE HAUNTING. Nevertheless, director John Hough crafted a decent ‘70s horror that has proved influential on such subsequent projects as POLTERGEIST (which combined the idea of depicting all the various kinds of ghostly phenomena with Matheson’s story “Little Girl Lost”), William Malone’s remake of HOUSE ON HAUNTED HILL, and Stephen King’s ROSE RED, as well as numerous televsision series showing scientific teams investigating haunted houses and other ghostly locations. In fact, Matheson is in many ways the link from the Gothic horror of the past (including his famous work on Corman’s Poe pictures) to the modern-day scares of Stephen King (who has acknowledged his debt to Matheson’s I Am Legend, The Shrinking Man, and Hell House, all set in modern times).
Fox’s DVD release is anamorphically enhanced and at last presents the film in its original aspect ratio of 1.85. The colors have a muted look and there is a touch of grain, both of which are common to many ‘70s movies. The dual-layer disc also has a very high average bit rate. An additional perk is that Fox Video has given it a very reasonable sell-through price.
Both the film and the book have their limitations, but each made its own notable contributions to the development of the horror genre, and I found re-experiencing them to be quite enjoyable. They are both definite milestones in opening new territory for horror to explore in terms of adult content and taking a scientific approach to psychic phenomena. 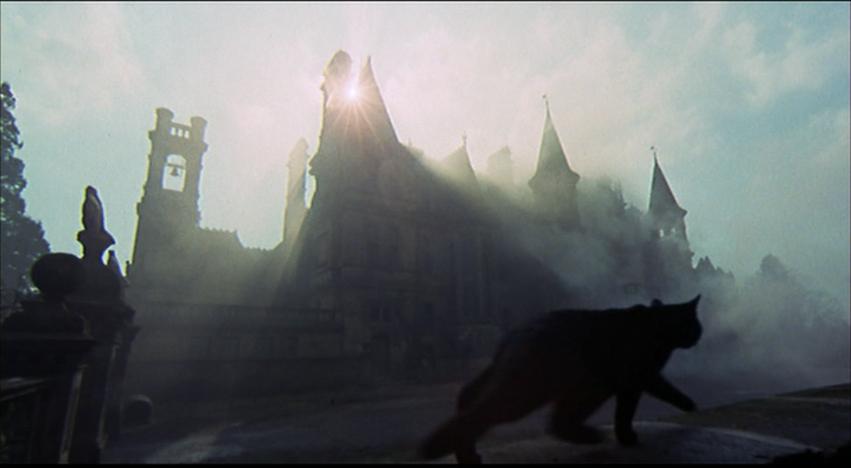