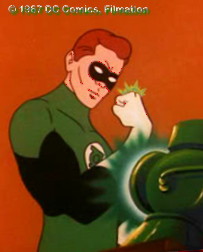 The Hollywood Reporter says that The Cartoon Network is planning an animated Green Lantern series.
The article states that during a slide presentation for investors by Phil Kent (Chairman and CEO of Time Warner’s Turner Networks), a slide of Cartoon Network original programs included the title ‘GREEN LANTERN: The Animated Series’.
Later today, Warner Brothers CEO Barry Meyer indicated that this was a sign of their plans to increase coordination between Warners and the Turner cable entities.
Time Warner also recently formed DC Entertainment, to better exploit and promote the value of the comic book characters in other media.
The animated show is apparently planned for a 2013 launch, two years after Warner Bros. live-action GREEN LANTERN feature, currently in production and due in theaters June 17th, 2011.