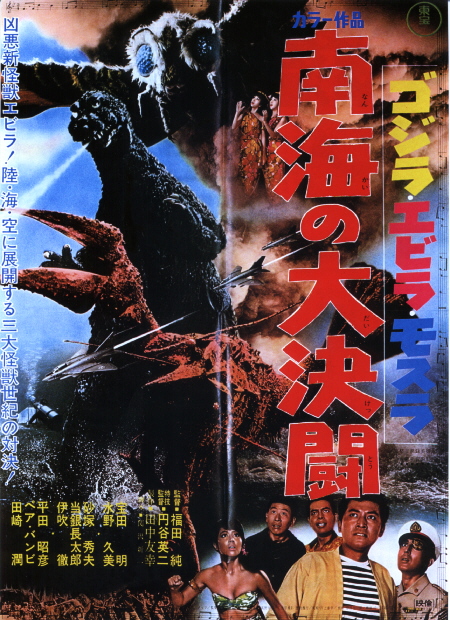 This is one of the silliest but also one of the more amusing Godzilla movies. The goofiness of the enterprise somehow becomes part of the entertainment value, resulting in a likable, fun-filled, fast-paced movie that is totally incredible but quite watchable.
The story begins (in the original Japanese cut) with a family worried about a missing son. Some people go looking for him and wind up accompanied by a likable thief who recently pulled off a big heist. Their search takes them to a South Seas island, which is protected by Ebirah, a giant shrimp-like monster. As if this were not bad enough, the island is the secret base of an organization calling itself “Red Bamboo” that is planning to launch a campaign of world domination. As slave labor, they have been kidnapping villagers from a nearby island presided over by Mothra, the giant moth-like god; among the slaves is the missing son. After infiltrating the villains’ lair, our heroes discover Godzilla lying dormant in a cave. By stringing up some wire into a lightening rod, they manage to revive Godzilla when a storm comes by, sending down the necessary bolt of electricity. The giant radioactive reptile turns his destructive attention on the bad guys, destroying the Red Bamboo facilities. The villains set a self-destruct device to blow up the island and make their escape, but their island slaves have double crossed them, intentionally botching a batch of the Ebirah-repellant formula they are forced to manufacture; as a result, the giant shrimp smashes the Red Bamboo’s escape vessel. Godzilla kills the giant shrimp; then Mothra arrives just in time to rescue the islanders. Grateful for Godzilla’s help, the escaping people yell at him to jump off the island – which he does, just before it goes up in a nuclear blast.
The script by Shinichi Sekisawa eschews the city-stomping clichés that hard marked previous Godzilla flicks, in favor of an island setting, lending a new flavor to the film. With its SPECTRE-like secret organization plotting to take over the world, GODZILLA VS. THE SEA MONSTER feels almost like a James Bond film, and director Jun Fukuda treats it as such, featuring lots of fast-paced action and gunplay. Frankly, the whole thing is totally ridiculous, and yet somehow it manages to be colorful, exciting fun.
The cast seems to enjoy their roles, perhaps because several of them are playing against type. Akihiko Hirata (the noble, self-sacrificing scientist in the original GODZILLA) wears his eye-patch again, but this time he plays a strutting, uniformed villain – with appropriate gusto. Cast as a thief, Akira Takarada leaves behind the bland good-guy persona of his previous Godzilla appearances and actually brings off a feeling of daring and panache.
By this point in the series, the special effects had given up any pretense of being convincing, and the result is that Godzilla’s scenes often resemble something that might be called “Muppet Theatre.” The camera tends to be at eye-level, destroying any sense of size, and tracking and hand-held shots further undermine any illusion of an enlarged perspective, constantly reminding us that we are watching a man in a suit.
That said, the monster action is fun, in a juvenile way. Godzilla is almost totally anthropomorphic at this point. At one point, he flicks his finger along his nose after dispatching one opponent. In his battle with Ebirah, the giant shrimp winds up like a baseball pitcher before throwing a boulder, which Godzilla bats back with his head, like a soccer player. There are the usual jets on wires firing missiles, a scrawny vulture-like bird that shows up just enough to get torched by the Big G’s radioactive breath, and little kids get a big kick out of seeing Godzilla’s feet-first dive off a cliff into the ocean at the end.
It may be nonsense, but it is enjoyable nonsense for fans, especially younger ones. There can be no doubt that by this point Godzilla had completely mutated from his original purpose (as a walking metaphor for nuclear destruction). As such, this film has little appeal for serious science-fiction fans, but if you don’t mind checking your brain at the door, you may be surprised to find yourself having a very good time indeed.

Our group of intrepid heroes, led by a likable thief, unlocks a vault-like door within the high-tech headquarters of the secret organization bent on world domination. They sneak inside – only to rush out again, as one yells, “Quick, get out – it’s a nuclear reactor!” Luckily, their close encounter with atomic energy leaves none of them suffering from radiation burns or sickness of any kind.

This is the first film wherein Sadamasa Arikawa took over for Eija Tsuburaya as director of special effects. Unfortunately, the low-budget serves Arikawa poorly, and the effects are below par, even by the standards of Japanese fantasy films. In particular, the Godzilla suit is not a new one but a leftover from previous films. In some shots, the patchwork is visible – damage from the pyrotechnical abuse (miniature missiles, etc) has left noticeable damage.


The script, written when the Godzilla series was running out of gas, was originally intended as a vehicle for King Kong, hence the South Seas setting and the scene wherein Godzilla makes goo-goo eyes at a native girl. However, Toho studios could not secure the rights to the Kong character, so Godzilla was recast in the title role, apparently with little or no rewriting. (Note that Godzilla is revived with lightening – which had worked so well for Kong in Toho’s KING KONG VS. GODZILLA.) As a result, the film represents an almost complete break with the continuity established by the previous Godzilla films.
The English-dubbed American version of the film omits any verbal references to either “Red Bamboo” or “Ebirah.” Also, the film is extensively recut. Instead of beginning with a family worry about their missing son, the American cut begins with a small boat lashed by a storm while a giant lobster-like claw emerges from the depths. Although positioned to suggest that this is the missing son, the footage was moved up from later in the film, and represents a completely different character in a different boat (if you look closely, you can tell, because the name of the boat is visible). This version of the film was never released to theatres; instead, it was sold directly to television.
The film’s original Japanese title translates roughly as GODZILLA, MOTHRA, AND EBIRAH, THE HORROR OF THE DEEP. The shorter EBIRAH, HORROR OF THE DEEP was the international release title, used when Toho was shopping the film for foreign distribution.
This is one of several GODZILLA films that were released in Germany with a title change to include the word “Frankenstein.” Apparently, German film distributors thought this would increase the film’s commercial appeal. Contrary to some rumors, the German-language dubbing did not rename Godzilla as “Frankenstein.” Rather, the monsters that Godzilla fought were explained as creations of the infamous doctor.