According to The Chicago Tribune , Syfy’s developing an online BATTLESTAR GALACTICA series, to be called BLOOD AND CHROME, to feature a young William Adama, set during the first Cylon War.
SyFy’s executive vice president of original programming (and the co-head of original content for Universal Cable Productions), Mark Stern told them that GALACTIC and CAPRICA’s Michael Taylor is set write the the script for the new web feature.
BLOOD & CHROME would be made up  of nine or ten ‘webisodes’, each running nine to ten minutes.  The series, if all goes as planned, would be shot mainly using actors against green screen, to be be composited into CGI sets (as was initially done on SANCTUARY).
The article explains that highlly detailed scans were made of the BSG physical sets before that series ended, with the idea already in mind that future projects might make use of them as virtual sets.
Writer/producer Michael Taylor told the Tribune that  the web series isn’t going to shy away from R-rated “blood and guts and sex”.

“Because this is initially meant to air online, we pretty much have no restrictions in that department.” 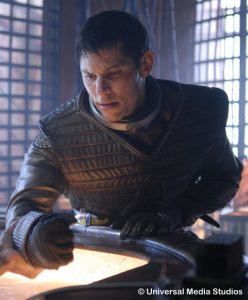 It’s not yet known if BLOOD & CROME will star  Nico Cortez (pictured), who played young Bill Adama in RAZOR, the Direct-to-DVD Galactica movie. The web series will likely feature  new actors & characters, though one other character from RAZOR may appear.
If BLOOD & CHROME is greenlit and successful, it could be the springboard for more projects of a similar nature—or even a new cable series for SyFy.