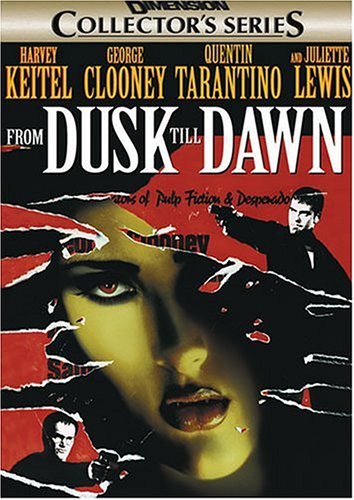 It’s not easy being God – just ask Eric Clapton. Quentin Tarantino has achieved iconic status, to the point that it was widely assumed his involvement in this crime-horror hybrid would guarantee blockbuster success. What people forget, however, is that Tarantino has only one blockbuster to his credit (PULP FICTION). Not that artistic achievement should be judged by box office, but it’s not a bad idea ot remember that his name, on its own, is not yet a guaranteed franchise. If we needed any proof of this, the disappointing FROM DUSK TILL DAWN certainly provides it.
Tarantino tries to rework the structural ploy from the Bruce Willis section of PULP, in which a story going in one direction takes an abrupt and outrageous turn; unfortunately, that gambit can’t work in a feature film, when all the trailers and pre-release interviews have told us that this crime melodrama will end up in a lair full of vampires.
The result is that the set up takes too long, because we know what is going to happen. In fact, the killer on the road sequences end up resembling nothing so much as the most over-extended first act in screen history.


What accounts for this miscalculation? One can only assume that it ws to provide more screen time for Quentin Tarantino in his co-starring role. Actually, he acquits himself well enough by mostly standing in the shadow of George Clooney, who proves himself an excellent leading man. Still, one cannot help wishing that some of that screen time had been devoted to more deserving characters who show up later, such as Hayek’s vampire dancer Santanico Pandemonium, who ends up being destroyed far too soon (an unbelievable miscalculation on the part of Tarantino and director Robert Rodriguez).
When we finally get to the vampire striptease club south of the Mexican border, the film immediately jumps to life: it is as if Robert Rodriguez, back on home turf, has finally got a handle on the film. When the first melee occurs, and the characters we have been following find themselves thrust together and fighting for survival with the help of  two complete strangers (ably played by Fred Williamson and Tom Savini, the latter known for his makeup work on DAWN OF THE DEAD), the film briefly realizes some of its full potential.
Alas, no sooner is this new group drawing  together under adverse conditions, than Quentin Tarantino’s script begins dispatching characters left and right, rather than dramatizing the internal conflicts that must inevitably arise under such duress (a la NIGHT OF THE LIVING DEAD or ASSAULT ON PRECINCT 13).
Quentin Tarantino is a real movie-movie talent; that is, much of his cleverness comes from knowing films and filmic expectations and bending them to suit his purpose or re-using familiar material with a win of recognition toward the audience. thus, the appearance of Savini and Williamson is an amusing nod to the cult audience, not because of the characters but because we recognize the actors and associate them with their past accomplishments.
At other times, Tarantino’s script is a bit too clever, setting up interesting ideas that never pay off. For instance, the Gecko brothers are escaping to a lace in Mexico called El Rey – which just happens to be the name of the enigmatic ruler of a south-of-the-border haven for escaped criminals in Jim Thompson novel The Getaway.In the final chapter, (which was omitted from both film adaptations), the escaped robbers find themselves in a criminal sanctuary that is little better than Hell on Earth (“You tell yourself it is a bad dream. You tell yourself you have died…and have waked up in Hell.”) One might, therefore, expect the sanctuary in DUSK TO be similarly revealed as no safe haven at all and that Seth Gecko, through his confrontation with tangible evil in the Titty Twister Bar, would change his ways, choose not to go to El Rey, and thus avoid a horrible fate. Instead, the idea is abandoned. As with everything else in the film, Quentin Tarantino seems almost frantic to throw away potentially good material in favor of impaling a few more hearts and exploding a few more bodies.

Sitting in the director’s chair, Robert Rodriguez does an adequate job of filming the gobs of gore, but for some reason the action lacks the balletic intensity of DESPERADO – the stylistic verb that invites sympathetic viewers to forgive the story deficiencies. and simply surrender to the excitement of the on-screen carnage.
Whereas one might reasonably have expected that the combo of Quentin Tarantino and Robert Rodriguez would yield a critical mass of nuclear proportions, instead of an atomic fireball’s worth of entertainment, we get a long fuse, quite a bit of fizzle, and a rather minor blast. It is a shame to see so much good talent giving such low-yield results.
FROM DUSK TILL DAWN (1996). Directed by Robert Rodriguez. Written by Quentin Tarantino. Cast: George Clooney, Quentin Tarantino, Harvey Keitel, Juliette Lewis, Cheech Marin, Salma Hayek, John Saxon.

Copyright 1996 by Steve Biodrowski. This review originally appeared in the June 1996 issue of Cinefantastique (Volume 27, Number 10).