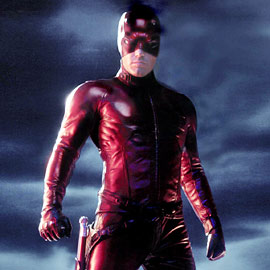 According to The Hollywood Reporter, 20th Century Fox is planning a new DAREDEVIL movie, a belated follow-up of sorts to their 2003 film, which starred Ben Affleck.
Producers  Peter Chernin (RISE OF THE APES)  and Dylan Clark (ROBIN HOOD, 2010) of Chernin Entertainment are resurrecting  the Marvel Comic character  for Fox and Regency Pictures.
David Slade (30 DAYS OF NIGHT, TWILGHT: ECLIPSE)  is in negotiations to develop and direct the project, which does not have Affleck attached. The impression given is that it will be a stand-alone film that references the first movie, making it a kind of sequel.
(Much in the way of SUPERMAN RETURNS being a follow-up to SUPERMAN II, I would imagine.)
Unamed sources tell the site that the storyline may be based on the Frank Miller/ David Mazzucchelli ‘Born Again’ sequence of the comic book, in which the Kingpin discovers Matt Murdock is the Daredevil, and proceeds to destroy his life.