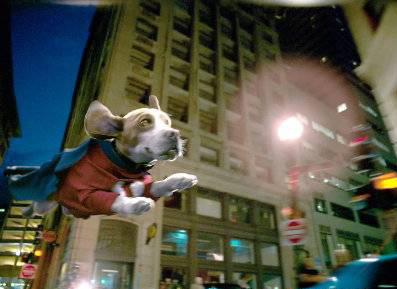 Timmy, the imaginary five-year-old nephew I took with me to see this movie, opines:

I liked this movie lots and lots. The best parts were the parts I already seen, where they show you the parts of the movie before the movie comes out, but there was some other good parts too like the part where Underdog buries the bomb underground and the part where he flies in outer space. There was a part where a man dressed in a dress like a girl and that was pretty funny. I didn’t like the part too much where they put Underdog in the cage where the bad guy had his lab but that part didn’t last too long so it wasn’t too bad and it ended when Underdog got his Underdog powers and got out and the lab caught on fire but I couldn’t help wondering what happened to the other animals in the cages, I hoep they got out okay too.
The bad guy was little he was barely bigger than me but he could do lots of stuff and mayb if the mayor had listend to him none of this would have happened but big people never listen to little people cause they think we’re all stupid kids so they don’t listen and I just wish they had but they didn’t so the bad guy made Underdog by accident and then he made more super dogs and tried to blow up the city which was bad and it was kind of scary and the bad guy was kinda scary but I kinda liked him too cause he was little like me.
I didn’t like the part where Underdog was with Polly, that was mushy stuff like girls like but I’m not a girl so I don’t like it too much. I didnt understand why uncle Steve was laughing when Underdog and Polly were flying over the city, but he told me at least Polly doesnt talk bad poetry like Lois Lane. And I didnt get why uncle Steve was laughing too when Underdog and Polly were pushing a meatball with their noses and he said what’s the matter you stupid kid havent you ever seen lady and the tramp and I asked him what that was and he told me it was a cartoon like they used to make before they made computers which was a long time ago before I was born.
That reminds me i didnt understand the first part of the movie where it was like a cartoon, only like an old cartoon before they made computers, it looked all flat and funny not like cartoons nowadays look where they make them with computers. They showed underdog in the cartoon but it doesnt look like underdog really looks noawdays either. It was like they were telling me there used to be another underdog a long time ago before I was born but who cares about that anyways, I just like seeing underdog the way he looks nowadays. But I guess in the old days old people like the old underdog a lot and maybe that’s why they made the movie so I guess that’s okay too.

I should perhaps explain that, being imaginary, Timmy is not quite sure whether his intelligence level should conform to that of an actual five-year-old or expand to the level needed to make his current point. I’m sure he’ll work it out. You can read the rest of his comments below the fold.

The part I most didn’t like was where underdog ate the pill htat made him not underdoog any more he was just a normal dog like any other. It was because he was afraid hs owner boy only liked him when he was underdog but he just wanted to be a normal dog but if I was underdog i would keep my powers alwaYS. And uncle Steve said something about he was tired of movies where superheroes giv eup ther powers and he started talking about a bunch of old movies like superman 2 and spiderman 2 and fantastic four and superman returns and maybe some others but i wasn’t sure.
So anyways I like underdog a lot and I thought it was funny bcause they said pooh a lot and the dog said he would eat his own barf which is gross but it made me laugh. I liked the underdog song too but the one at the start of the movie was lots better than the one at th end of the movie which sounded kind a like gangsta-rap which i don’t listen to cause uncle Steve says it makes you want to hurt girls and shoot cops and…

I never said that!
Although Timmy sums up the strengths and weaknesses of the film fairly well (he has the makings of a fine critic), I do want to make some points of my own: