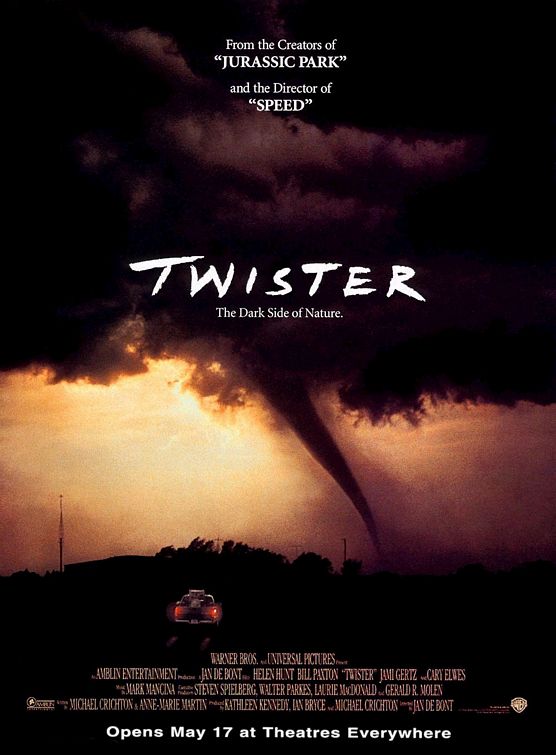 Well, the film is out, and the reviews are in. Predictably, the critics carping over TWISTER’s alleged failings have proved that they don’t appreciate the wonders of cinema magic, for this movie is a wonder to behold. Working from a simple premise (storm chasers pursue tornadoes in the hope of gaining information to build a better warning system), the film builds itself up almost solely out of action surrounding its title phenomenon. As one would expect, DeBont directs the affair almost exactly as he staged SPEED: the action starts in the opening frame and never lets up. What’s surprising is that, after an overwhelming opening sequence that stuns its audience into silence and then appreciative applause, the film actually manages to sustain this intensity level (unlike CLIFFHANGER, which opened with its best scene and fell downhill from there).
Along the way, there is little time for intrusive attempts at characterization, and thank god for it. What we learn about these people, we learn on the run, and the last thing the film needed was a sentimental interlude to bog down the action. Basically, the human interaction boils down to whether the estranged husband and wife team of Jo and Bill Harding Hunt and Paxton) will get back together in spite of Billi’s new fiance Gertz). To be honest, it’s no surprise that they do, but the success of the film hardly rests on these dramatics, nor should it.
The film is far from lacking in personality; it is not the mechanical thrill machine some would accuse it of being. In fact, it has a rather amusing eccentric sense of humor. Bonus points are awarded for the supporting character’s quoting an appropriate dialogue exchange from REPO MAN (“An ordinary person spends his life getting out of intense situations….A repo man spends his life getting into intense situations”). Extra bonus points are awarded for having THE SHINING playing on the drive-in screen, which is torn to pieces just as Jack mouths his infamous “Here’s Johnny!” line.
Finally, we can be grateful that the film’s antagonist (Cary Elwes), set up as an unsympathetic martinet, is not dismissed with audience cheers when he meets his demise. Whatever the differences that set him apart from our audience identification figures, his death is not milked for any easy laugh. (Even a film as otherwise good as SILENCE OF THE LAMBS couldn’t resist the last-minute temptation to make a joke out of an unsympathetic character’s demise.) Instead, here, the horror of the situation is portrayed through the helpless reaction shots of Hunt and Paxton, who obviously view this as no triumph over an opponent. And that’s more humanity than you get in most action films these days.
TWISTER (1996). Directed by Jan de Bont. Written by Michael Crichton and Anne-Marie Martin. Cast: Helen Hunt, Bill Paxton, Cary Elwes, Jami Gertz, Philip Seymour Hoffman, Lois Smith, Alan Ruck, Sean Whalen, Scott Thomson, Todd Field.
*Quoted from the M.P.A.A.’s rationale for rating the film PG-13.
Copyright 1996 by Steve Biodrowski. This review originally appeared in theissue of Cinefantastique: Volume 28, Number 1 (August 1996). You can look for other articles from this issue in the archive for August 1996.