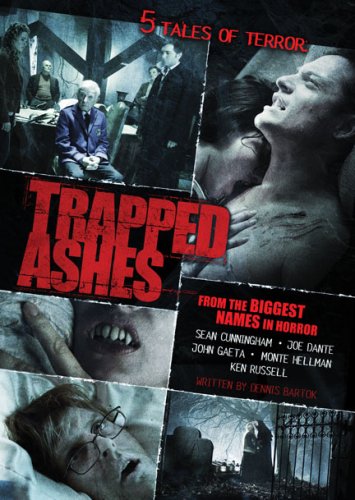 This may be the ultimate piece of horror nerd nostalgia cinema, a movie loaded with trivial tidbits that serve as talking points for confirmed geeks while the vast majority of the viewers remain absolutely clueless. Produced and scripted by Dennis Bartok (who used to program the schedule for the American Cinematheque in Hollywood), TRAPPED ASHES grafts limbs, organs, and brain matter, taken from movies  Bartok used to screen, into a virtual meta-monster, as if Frankenstein had stitched his creation together not from dead bodies but from bits and pieces of other mad scientists’ experiments. Underlining the point, some of those “mad scientists” – er, film directors – are on hand to take part in Bartok’s experiment. The result is a cult film that will appeal to trivia buffs, but hardly represents a comeback for the veteran filmmakers involved.
Like HOUSE THAT DRIPPED BLOOD and many other films produced by frequent Cinematheque guest speaker, the late Max J. Rosenberg, TRAPPED ASHES is an anthology of stories tied together by a wrap-around narrative. A group of people go on tour of an abandoned Hollywood studio, where they find themselves trapped inside a set for a horror movie. They pass the time by relating strange events that happened in their past, each story serving as an episode:

The wrap-around story, directed by Joe Dante (THE HOWLING, GREMLINS), is nicely integrated into the film: it literally wraps up the individual stories, twisting their apparent resolutions into something different. Unfortunately, the ultimate twist will be little surprise to those familiar with the films that TRAPPED ASHES emulates; if you have seen DR. TERROR’S HOUSE OF HORRORS, TALES FROM THE CRYPT, and/or THE VAULT OF HORROR, you will see it coming a mile away (not to mention, that the phrase “Trapped Ashes” is itself a hint).
Although fitfully entertaining, TRAPPED ASHES is too much an insider experience to appeal much beyond an esoteric cult; despite the talent involved both before and behind the camera, it comes across almost like a home movie, cluttered with inside jokes and references of interest only to the initiated. (Bartok casts his look-alike brother in a role and has someone refer to having seen him at the Cinematheque.) For fans who want to see some of their favorite cult actors and directors at work again, the film does have its rewards. Henry Gibson is good as the tour guide, and John Saxon has a nice turn as the film director who used to know Stanley. Production values are limited by the budget, but the old pro directors use the resources as well as could be hoped. The stories, though not fully satisfying, are odd enough to generate a little interest – any film that let’s Ken Russell direct an episode about killer breasts deserves some kind of credit, almost regardless of the results.
TRAPPED ASHES(2006). Directed by Joe Dante, Ken Russell, Sean Cunningham, Monte Hellman, John Gaeta. Written and produced by Dennis Bartok. Cast: Jayce Bartok, Henry Gibson, Lara Harris, Scott Lowell, Dick Miller, Michele-Barbara Pelletier, John Saxon, Racehl Veltri, Ken Russell, Yoshinori Hiruma, Ryo Ishibashi, Yozaburo Ito, Amelia Cooke, Tygh Runyan.