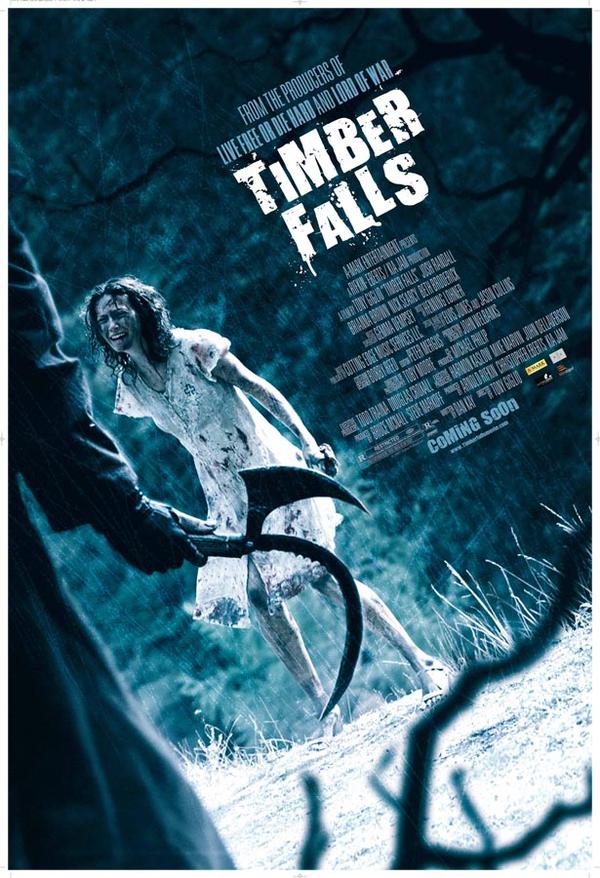 The “Captivity” genre of horror films (in which victims are not quickly killed but instead are kept alive to endure lengthy torment) is wearing out its welcome (at least judging by the box office returns of CAPTIVITY and HOSTEL 2), yet it does yield the occasional welcome surprise. For example, the low-budget TIMBER FALLS  is an effectively horrifying opus about about religious loonies who kidnap a couple in order to force them to conceive a surrogate child. The premise may not sound sound particularly auspicious, but instead of just another “Torture Porn” flick, we get a black-comedy satire that combines elements of MISERY, DELIVERANCE, and THE TEXAS CHAINSAW MASSACRE. Although clearly derivative, the film works hard to assemble its familiar pieces into something that works in its own right, and largely succeeds. The characters and suspense are handled well, and the horror hit most of the right notes – grim enough to to yield some grueling fright without drowning lost in a welter of blood.
The story has unmarried couple Sheryl (Brianna Brown) and Mike (Josh Randall) out for a weekend of hiking in the mountains. Ignoring the recommendation of a local ranger, they take the advice of Ida (Beth Broderick), who suggests they take the trial leading by Timber Falls. Along the way, they encounter some unpleasant locals, who resent the intrusion of the rich city folk into their territory. However, these uncouth ruffians turn out not to be the real villains. Far more ominous is the malformed Deacon (Sascha Rosemann), sort of a nod toward CHAINSAW’s Leatherface, but even he turns out not to be the primary malefactor. Sheryl and Mike find themselves forcibly married by the patriarch of small family of fanatics, whose adult daughter cannot conceive a child of her own. Sheryl is drugged and trussed up in the basement, and Mike is left alone with her, to perform the procreative duties…
It is an extremely unpleasant situation, and the film milks it for several gruesome moments. The script piles on some nice ironies that keep the story dramatically interesting amidst the bloodshed: despite their apparently happy relationship, Mike has been reluctant to marry Sheryl; his enforced wedding is almost like his worst fear come to life. The revered institution of marriage is degraded in a way that almost seems designed to make you understand his reluctance.


Unfortunately, the satire is not always so deftly handled. Christianity – or more precisely, backwoods fundamentalism – takes thumping, but the attack is handled with a crude bludgeon, not a precise foil. The film is clearly attempting to make a satirical statement about the hypocrisy of religious fanatics convinced that their beliefs justify their depraved actions, but all too typically the screenplay never makes the obvious point: according to the religion these fanatics profess to believe, they are committing acts that will damn them to hell. Also all too typically, the protagonists are secular character incapable of mounting any kind of counter-argument to their captors’ beliefs.
In fact, the idea of using Christian kooks as villains seems like a throwback to CARRIE. (THE MIST, released last month, also makes this mistake.) These lonely backwoods loonies are almost quaint in an era when alleged Christians control the reins of government and use their beliefs to justify the unfettered use of power, including unprovoked war and torture of enemies. In fact, the only way to view the satire in TIMBER FALLS as not completely irrelevant is to imagine that its mad fundamentalists stand in for the current excesses right-wing politicians in general and the Bush administration in particular. This interpretation may be a bit of a stretch, but Clyde (Nick Searcy) does bear a certain resemblance to Dick Cheney.
Subtext aside, TIMBER FALLS delivers enough decent thrills to satisfy its intended audience. Deacon may be no Leatherface, but he gets the job done well enough. The film strikes a reasonable balance between the horrible suffering of the protagonists and the equally horrible final-reel pay-back, which is immensely satisfying. The gore is safely in the R-rated category, although not excessive for its genre. Although a low-budget independent effort, the film contains one of those tagged on final scenes to let you know things turned out well. In this case, the ending is at least nominally justified by the plot (which makes Sheryl a nurse, who could presumably save someone’s life), but emotionally, it still feels like a bit of a cheat.
Whatever its failings, TIMBER FALLS is at least as effective – and actually a good deal more so – than the eight low-budget efforts in this year’s After Dark Horrofest (which saw limited theatrical distribution in November). In an era when most indie horror goes direct-to-video, regardless of quality, TIMBER FALLS is good enough to deserve its own shot in theatres. Although the release is limited to 50 theatres, horror fans lucky enough to catch it in their local theatres will be glad they sought it out.

TIMBER FALLS screened on the last weekend of the 2007 Screamfest film festival in Hollywood. Earlier, the festival had screened HALLOWED GROUNDS and STORM WARNING, both of which feature elements similar to TIMBER FALLS: