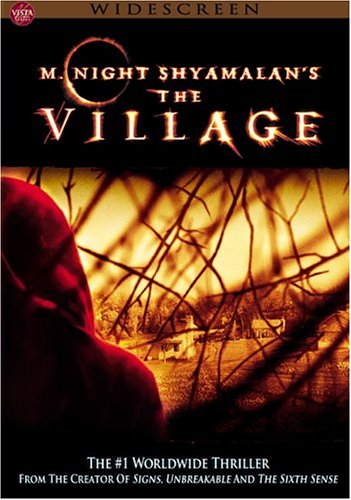 Not a nice place to visit, and you definitely don’t want to live there.

Like UNBREAKABLE, this is another major disappointment from the writer-director of the excellent THE SIXTH SENSE. THE VILLAGE is not completely awful, but it comes closer than one would like to admit. Although there are a few good scenes and some strong performances, the film suffers from unbearably slow pacing, and much of the drama is uninvolving. There are a few suspenseful moments, but the film does not carefully build up to them – it simply serves them up at irregular intervals and hopes the audience will sit still long enough to get to them. The problem seems to lie at the heart of the film’s premise: What is the background of the mysterious Village? Where is the Village located? In what time period does the story take place? All of this is kept secret from viewers, although (it turns out) the older inhabitants (i.e., the founders of the Village) know perfectly well.
Under the circumstances, you might expect the film to be told from the point of view of a curious younger villager, who would act as an audience surrogate while discovering the truth about the place where he lives. Sadly, you would be wrong in your expectation. The story is, in effect, a mystery without a detective smart enough to unravel it, leaving it up to the audience to sort it out on their own.
This might have been tolerable if the story maintained its focus. Instead, it rambles, trying to deal with sub-lots and character issues only tangentially connected to the central mystery. Structurally, the story does manage to maintain a minimal level of interest by planting clues and presenting unexpected twists and surprise revelations. But these twists end up raising more questions than they answer. In effect, you must wait through the whole film to find out what the premise really is, and then when you finally know — the movie is over! And nothing changes — no lessons learned, no dramatic upheavals. Just back to the status quo.
SPOILERS
The big surprise, of course, is that this quaint, old-fashioned-looking Village (whose look and costumes suggests the 19th century) is actually located on an isolated, private reserve in the 21st century. The scary bogey-men are just the founders dressing up in costumes to scare the kids so they won’t travel outside the border and discover the truth. The founders concocted this whole plan to escape from the problems of modern life, but it never seems to occur to them that their voluntary withdrawal does not entitle them to force the next generation to follow in their footsteps. The sheer outrageous immorality of their actions goes unaddressed by Shyamalan, who leaves the characters inside their artificial cocoon at the end of THE VILLAGE. It’s as if Truman had stuck around in THE TRUMAN SHOW instead of bailing out.
Consequently, the movie suggests that modern life – its technology and its customs – is so horrible that a retreat to a simpler, primitive lifestyle is preferable. This is not a completely outrageous argument; at least one can understand why some may espouse it. But THE VILLAGE goes further, advocating a complete separation from the world as a whole, even if that entails cutting oneself off from the advantages of the world – including things like life-saving medicine. Thus, the Village elders are basically a whacked-out cult of social misfits, and their children pay the price for it.
Thematic questions aside, the big surprise about the nature of the Village is not enough to justify the length of the movie. This might have worked as a half-hour TWILIGHT ZONE episode, but it is not enough to sustain feature length. The result is that the film plods along like a soap opera, interrupted at irregular intervals by the occasional intrusion of the “monsters.” Unfortunately, this horror element ends up feeling tacked on – a desperate attempt to generate some excitement in a film that’s ultimately about keeping the lid on a secret that should have been blown wide open.

Writer-director M. Night Shyamalan shows up (just barely – his face reflected in glass) at the end of the movie, in a cameo as some kind of guard or supervisor who is supposed to make sure the Village remains isolated. In his brief dialogue, he admonishes an underling not to engage passersby in conversation because it leads to no end of grief trying to provide explanations (such as why airplane traffic is directed away from the area) without giving away the secret behind the Village.
It seems fairly clear that this is Shyamalan’s message to his critics: he does not want to engage them in conversation about the questions raised by the premise; he simply wants viewers to sit back and accept what they see, whether or not it makes sense, on a plot or a thematic level.
If THE VILLAGE had been simply flawed (like UNBREAKABLE), this “don’t ask, don’t tell” policy might have been funny. But in a film that endorses the unquestionably immoral behavior of the village elders, it seems outright offensive to suggest that the audience, be they critics or casual viewers, should simply shut up and listen to the nonsense being peddled.
THE VILLAGE (2004). Written and directed by M. Night Shyamalan. Cast: Bryce Dallas Howard, Joaquin Phoenix, Adrien Brody, William Hurt, Sigourney Weaver, Brendan Gleeson.