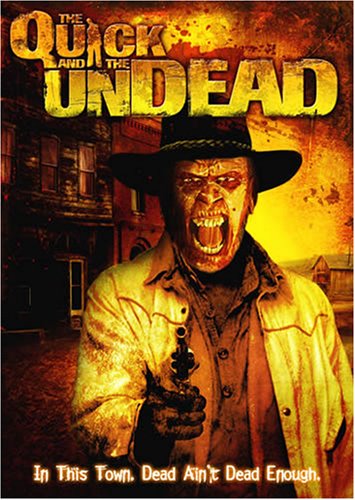 As the title suggests, this is a combination of George A. Romero and Sergio Leone – a point emphasized by the opening scenes, which cleverly juxtapose a nice main title sequence that fills in the back story (a la LAND OF THE DEAD) and a long-shot of a lone zombie felled by an unseen bounty hunter’s rifle (a la FOR A FEW DOLLARS MORE). Set in a low-budget, post-apocalyptic future, the premise is that a viral outbreak has turned three-quarters of the population inzo the walking dead, and the Western United States is now a deserted no-man’s land overrun by zombies. In this “New West,” bounty hunters earn bucks by gunning down zombies, hopefully clearing the way for civilization to return one day. Our anti-hero loner Baskin (Clint Glenn) makes a nice living this way until his bounty is hijacked and he is left for dead by a group of outlaws. He teams up with a duplicitous sidekick (think Eli Wallach in THE GOOD, THE BAD & THE UGLY) and tracks down the outlaws, led by a steely-eyed psychopath (who seems vaguely modeled after Lee Van Cleef).
The combination of two kinds of cliches yields a certain amount of cult entertainment for fans of either genre, and actor Clint Glenn not only looks remarkably like a young Clint Eastwood while squinting his eyes in close-up; he also captures some of the essential characterization. However, the idea for this film is a bit more amusing than the execution. Once the premise has been established, the script offers only a simple storyline to give the characters something to do. Which might be tolerable if the film delivered in stylistic terms; unfortunately, hampered by a low-budget, THE QUICK AND THE UNDEAD captures neither the widescreen spectacle of Leone’s Spaghetti Westerns, nor the montage-driven horror of Romero’s zombie opera.
Still, you have to give the film credit for its amusing conceit of setting a zombie film in a future world that resembles the Old West. It really is cool to see a lone, cigar-smoking gunslinger riding a tricked-out motorcycle – the perfect modern equivalent of a horse – while taking out zombies with the methodical precision of the Man with No Name.
THE QUICK AND THE UNDEAD(2006). Written and directed by Gerald Nott. Cast: Clint Glenn, Toar Campbell, Dion Day, Nicol Giacobbe, Brian Koehler, Erin McCarthy, Paul Molnar, Parrish Randall.