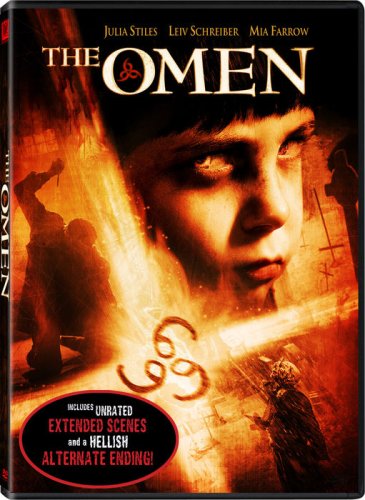 Although the film evokes the Book of Revelation to justify its story of the Antichrist, most of THE OMEN is Hollywood invention (e.g., Damien is born of a jackal and can only be killed by the seven daggers of Megiddo). Perhaps the most obvious discrepancy between the film and its alleged source material is that the “Number of the Beast” in the Book of Revelations is thought by most scholars not to be a prediction that the Son of Satan will someday walk the Earth; rather, the digits 666 add up to the numeric value of the name of Nero, the emperor notorious for feeding Christians to the lions.
THE OMEN(2006). Directed by John Moore. Written by David Seltzer. Cast: Lieve Schreiber, Julia Stiles, David Thewlis, Mia Farrow, Pete Postlethwaite, Michael Gambon, Seamus Davey-Fitzpatrick.