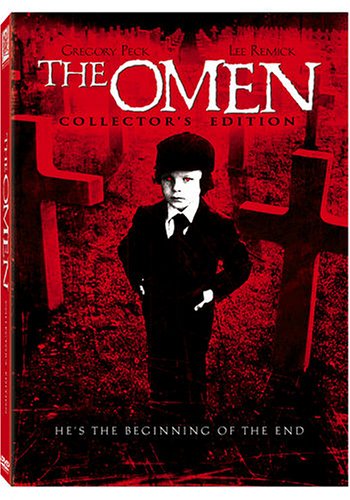 This film of the Antichrist’s appearance on Earth was part of the 1970s trend toward big-budget, studio-produced horror (e.g., JAWS) – a trend that effectively squashed the medium-budget genre efforts from Hammer Films and American International Pictures that had dominated drive-ins and local theatres throughout the 1950s and 1960s. THE OMEN is a slick, polished, and professional thriller that combines an intriguing mystery with periodic eruptions of bloody violence; in fact, it might be considered a breakthrough in terms of mainstreaming graphic gore – general audiences flocked to theatres in droves turning it into a major hit. In retrospect, THE OMEN looks a bit mechanical and soulless. In 1976, the film benefitted from the then-current social-political context, in which the End of the World seemed not only conceivable but likely. Today, there is a vague air of pandering about the storyline, a sense that the filmmakers a peddling a line of snake oil to a gullible public.
The story follows Ambassador Robert Thorn (Peck), who agrees to a suggestion that he surreptitiously adopt a child after his wife (Remick) gives birth a stillborn baby. As little Damien grows up, a series of ghastly incidents haunt the Thorn family (a nanny hangs herself; monkeys in a zoo go wild at the sight of the child, etc). A priest (Troughton) warns Ambassador Thorn that his adoptive child is actually the Antichrist, born not of a woman but a jackal (the word “jackal” is cut off in the editing, but Seltzer’s novelization of his own screenplay states it clearly). Thorn is incredulous even after the priest is skewered by a lightening rod that falls off the top of a church. Later, a photographer (Warner) reveals that photographs he has taken betray inexplicable marks that foretell the victims of this continuing series of “accidents.” Thorn and the photographer find an expert (McKern) who gives them seven daggers that are supposed to kill the Antichrist. Thorn resists using them, but the photographer (whose accidental snapshot of himself reveals that he’s the next victim) insists he will do it himself — until a plate of glass neatly severs his rolling head in slow-motion. Convinced, Thorn tries to kill Damien, but the police arrive and shoot him, leaving the demonic little child to be adopted by the President…
Although THE OMEN seems to be a combination of the story of ROSEMARY’S BABY fused with the more explicit style of THE EXORCIST, the film also owes a passing debt to the “creative death” plot structure established in THE ABOMINABLE DR. PHIBES, DR PHIBES RISES AGAIN, and THEATRE OF BLOOD. In effect, this is a fairly straightforward shocker that relies on a series of bloody jolts to deliver the scares, while using star power and lavish production values to layer a veneer of respectability over the proceedings.
The cast take the story seriously, which helps the audience buy into events that could have seemed simply crude shock tactics in a lesser movie. Peck, in particular, brings his usual dignity to the role of Robert Thorn; after a career of portraying moral rectitude, it’s doubly a shock that he should be the one duped into serving as adoptive father to the Antichrist.
Director Richard Donner serves up the shocks with professional if impersonal craftsmanship. All of the deaths are milked for maximum impact, particularly the decapitation of Warner’s photographer, which is not only impressive on a technical level; it’s also a great piece of montage editing, particularly building up to the event itself. It’s to Donner’s credit that, here as elsewhere, he elicits almost as much fear from the anticipation as from the payoff.
Also impressive is Jerry Goldsmith’s ominous score, which uses choral voices and other techniques associated with Church music, twisting them to create a chilling sense of omnipresent evil.
As effective as it was in its day, THE OMEN is a bit of a sub-classic. During the mid-1970s, when the Cold War was in full swing, with the U.S. and the U.S.S.R. seemingly on the verge of obliterating each other with nuclear weapons, this apocalyptic tale tapped into the zeitgeist; the ending, with Damien living on to bring about world destruction, seemed less like a contrived twist than a reflection of reality. The passing of decades have destroyed the sense that the film story is an uncomfortable metaphor for the world situation, and there is not enough ambiguity for it to work on any other level (unlike ROSEMARY’S BABY, which could be about the birth of the Antichrist — or could just as likely be about a paranoid mother going through a difficult pregnancy that is aggravated by her crazy neighbors who are part of a cult).
Now that the mystery of Damien’s origin is common knowledge, there is not much left to hold audience interest, except the thrill that comes from seeing one gory death per reel. Also, for a movie about the end of the world as we know it, THE OMEN presents a rather narrow view of the world: privileged, upper-class white people bedeviled by a foreign menace that they naively adopt into their household.
There is a calculated, commercial air about the film that slightly undermines a sense of credibility: unlike William Peter Blatty with THE EXORICST, you get the feeling that the makers of THE OMEN do not really believe the religious dogma they are peddling; they are just exploiting it as an excuse to make a violent horror movie.

In his essay “The American Nightmare,” film critic Robin Wood (who adopted a Freudian-Marxist paradigm in regard to the horror genre) argued that THE OMEN’s shock effects and storyline, on their own, were not enough to explain the film’s blockbuster popularity. He theorized that much of the appeal was that audiences were, at least subconsciously, rooting for the end of the world as portrayed in the film; in other words, the oppressed (poor, working class, and minority viewers) were getting a vicarious kick out of seeing their rich white oppressors decimated.
Viewers an critics may casually refer to the deaths in the film as if they were caused by Damien, but there is actually little if anything to suggest that Damien himself is consciously willing these events to happen (some, such as that of the photographer, take place miles away from him). With the exception of Mrs. Thorn (Remick) who tumbles off a balcony after Damien knocks here with his tricycle, the film suggests that an unseen Satanic power is acting to protect Damien by killing off those who know or guess the truth about him. Although the script does not push the interpretation, it is also possible that the various deaths are simply a coincidental series of horrible accidents.
Despite claiming the Bible as a source, the film actually has little to do with the Book of Revelation, except for the number 666, which appears in  Chapter 13:18: “Let him who hath understanding reckon the number of the Beast, for it is a human number, and his number is 666.” In Hebrew, letters are assigned numeric values, which can be added up when they appear in words. Many names contain letter combinations that will total 666; many scholars consider this a reference to the Roman emperor Nero, not a prediction of an “Anti-Christ” who will arrive in the future and destroy the world. In fact, the word “Anti-Christ does not appear in the Bible.
The famous poem (“When the Jews return to Zion…” etc) is non-Biblical, made up entirely for the film.
One should perhaps also point out that there seems to be a certain anti-Catholic tone to the story. Not only are the priests unable to stop the Anti-christ, some of them actively aided and abetted his birth and adoption (why, is never nexplained).
THE OMEN (1976) Directed by Richard Donner. Written by David Seltzer. Cast: Gregory Peck, Lee Remick, David Warner, Patrick Troughton, Leo McKern.