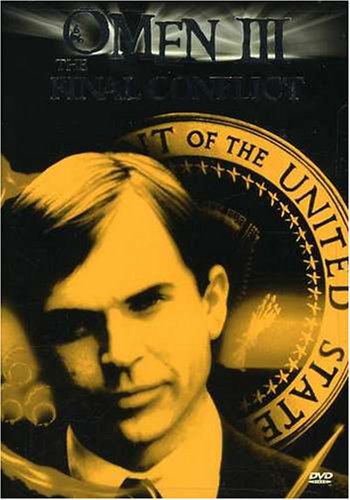 The gas had pretty much run out of the OMEN franchise by the time of this second sequel, and yet THE FINAL CONFLICT is quite an interesting film in spite of its obviously flaws. Sam Neill gives an excellent performance as the now adult Damien Thorne. Screenwriter Andrew Birkin makes at least a token attempt to wrestle with the problem of Evil. And director Graham Baker shows some real style behind the camera, using editing, angles, and movement to orchestra the shocks almost as well as Richard Donner did in THE OMEN. The insurmountable problem built into the scenario is that THE FINAL CONFLICT promises nothing less than Armageddon – a promise it cannot possibly fulfill while sticking to the established formula of killing off a handful of individuals who know or suspect the truth about Damien’s true identify as the Antichrist.
Instead of seeing a global-wide conflict, we get a few meager dialogue references to perfidy that Damien’s Thorne Enterprises is perpetrating in the Middle East, and there is a secret sect of priests (led by Brazzi) who have dug up the magical daggers of Megiddo, which they plan to use to dispatch the Antichrist.In effect, the “final conflict” of the title is not a war between angels and demons for the soul of the world; it is an assassination attempt. Desperate for a little variety, the script also throws in the non-Biblical notion that Christ will return to Earth by being born of woman once again, instead of simply flying down from Heaven. This gives Damien an excuse to send his minions to slaughter babies born on the appointed day. The tastelessness of the concept almost merits some kind of twisted respect, since infanticide is a line that even the most gruesome horror films usually refuse to cross (for example, THE HILLS HAVE EYES only toys with the idea).
With the apocalypse reduced to a handful of murders, THE FINAL CONFLICT is inevitably disappointing. And, sad to say, the angelic chorus at the conclusion, underlining a pair of Biblical quotes insisting that there will be no more wars or violence on Earth, sing a hollow, unconvincing note. Walking out of THE OMEN, it was easy to imagine that the world really was headed for destruction; walking out of THE FINAL CONFLICT, it is impossible to imagine that a millennium of Goodness and Light await us.
Yet, there are enough interesting elements to rescue the film from complete oblivion. Damien’s monologue, spoken to a crucifix with the figure of Christ backwards, ranks among the best cinematic villainous raving. And his philosophical observation — “Most people confuse Evil with their own petty lusts and desires. True Evil is as pure as innocence” – has a weird ring of truth to it.
Too bad the filmmakers did not have the nerve to throw out the old moribund formula and make a film that truly lived up to its concept. Instead, we’re left with just enough intriguing bits and pieces to whet our appetite for what might have been.

Trying to generate some hype for the film, producer Harvey Bernard tried to convince Cinefantastique magazine that screenwriter Andrew Birkin was a genuine philosopher of evil.
The last act of the film is based around the idea of Damien’s minion executing all contenders for the reborn Christ, and yet somehow a diaphanous, floating figure of Christ presides over the demise of the Antichrist at the end of the film. Audiences are left wondering if Damien’s assassins missed one candidate somewhere along the line (it is hard to get good help, even if you’re the Devil, apparently). One might surmise that the figure (whose ghostly image reveals few facial details) is one of the slaughtered infants. The novelization tells readers that the Christ child was born to gypsies, who did not go to a doctor or a hospital; hence, there was no record of the birth, and the servants of the Antichrist were unaware of the birth.
There is a major problem with the time-line of THE FINAL CONFLICT. THE OMEN was released in 1976, and it is clearly intended to be a contemporary movie. This would mean that an adult Damien would be in his 30s sometime around the year 2000, yet the script for FINAL CONFLICT has him refer to his plan to run for senate in 1984, implying that the events take place circa 1982. Clearly, the filmmakers were disturbed by the thought of setting FINAL CONFLICT in the future (which would have made it appear to be science-fiction). Consequently, they back-dated the time-line and hoped no one would notice that Damien had aged nearly three decades in only six years.
THE FINAL CONFLICT (1981). Directed by Graham Baker. Written by Andrew Birkin, based on characters by David Seltzer. Cast: Sam Neill, Rossano Brazzi, Don Gordon, Lisa Harrow, Barnaby Holm, Mason Adams.