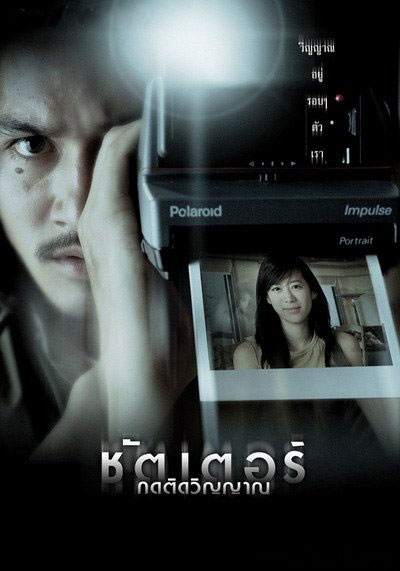 Strange things – ugly, scary, awful – lie hidden in the dark, unseen but not forgotten, waiting for their chance to manifest, crawling back into consciousness like Freud’s “Return of the Repressed” – refusing to lie quietly in the shadows, no matter how hard some characters try to keep the lights out. Invisible to the naked eye, they nonetheless manifest themselves via modern technology – in this case the camera lens, resulting in eerie “Spirit Photographs” that depict both the living and the dead. Are these images caused by guilty secrets or ghosts? In SHUTTER, the two are tied inextricably together, creating a chilling portrait of supernatural retribution from beyond the grave – one that will give even jaded J-horror fans a few pleasant goosebumps. After numerous films like RING (Japan, 1998), THE EYE (China, 2002), and a TALE OF TWO SISTERS (South Korea, 2003), you may think that the Asian ectoplasmic onslaught has dissipated like an exorcized spirit, but over the last few years Thailand has stepped in to fill the preternatural void, offering a handful of fine fright films that revitalize the familiar undead elements (including the spooky ghost girl with long black hair). One of the best of these, SHUTTER may not feel entirely new, but it is far more than a mindless zombie going through the familiar motions.
The story follows Tun (Ananda Everingham) and Jane (Natthaweeranuch), a young couple who run over a woman on the way home from a wedding party. Jane, who was behind the wheel, wants to go back and help, but Tun insists they drive away. While Jane is haunted by guilt, Tun goes about his business as a photographer, but he soon notices strange anomalies on the images he snaps: inexplicable streaks of light and shadow that sometimes seem to resemble the accident victim. Jane stumbles upon the alleged phenomenon of “Spirit Photography” and learns that ghost often manifest in images of loved ones whom they do not wish to leave. The ghost begins manifesting not only in photographs but also in dreams, eventually appearing to Tun while he is awake. Jane thinks she and Tun are being haunted by the woman they ran over, but Tun seems reluctant to admit the possibility or explore the mystery. Following clues in Tun’s photographs, she eventually learns why: the woman appearing in the photographs is Natre (Achita Sikamana), an old girlfriend who disappeared mysteriously after Tun treated her badly. What really happened, and why are all of Tun’s freinds from the wedding party suddenly committing suicide?


One of the eerie, effective elements of many Japanese ghost stories is the sense of randomness (most obviously manifested in the JU-ON films and their American remake THE GRUDGE, wherein you only had to step into the wrong house to be marked for death). SHUTTER works on a completely different level, with a ghost pursuing specific people in retaliation for a heinous act. This creates a servicable mystery plot that propels the film along at a decent pace. It also ties the characters to the supernatural events in ways that are relatable to the audience: most of us have not been literally haunted by a ghost, but more than a few of us have been haunted by guilty secrets in our past. This allows for some solid dramatic developments, and all the pieces – for good or ill – fall into place in a way that is entirely satisfying. There is just the right amount of complicity justify the haunting, mixed with enough regret to maintain sympathy for the character, and the film’s final shot is equal parts pathos and terror: for once, justice -as horrible as it is – is meeted out in a manner completely appropriate to the crime.
The scare tactics easily exceed anything seen in recent American attempts to cash in on the Asian horror invasion (including remakes of ONE MISSED CALL and THE EYE). The storyline is punctuated with numerous little spooky vignettes (an innocent medical technician who seems to call Tun a “lying bastard” in the dead girl’s voice; a ghostly face on a photograph that suddenly turns to look at Tun; the final-reel explanation for the pain in Tun’s neck, which has been forshadow by a nature documentary on the Preyming Mantis), and there are some imaginative and original set pieces. In one, the screen goes mostly black when the lights turn out, illuminated only intermittently by the flash of Tun’s photographic equipment, relying on the film viewer’s persistence of vision to pick out the uncanny details, such as the ghost who appears only for a frame or two and then disappears again. Slighly more conventional, but at least as startling, is the wonderful moment when Tun tries to escape the ghost by taking the a fire escape, and she pursues him down the ladder – crawling face down (perhaps an homage to Stoker’s Dracula, in which the vampire clambers down his castle wall in that fashion).
Looking a bit more like a resuscitated corpse than a disembodied spirit, Sikamana’s Natre may not surpass Sadako and Kayako as the Queen of Vengeful Ghosts, but she does deserve to be added to the family album right beside them. Everingham and Thongmee register as believable people, and their characters are blessedly free of the undue skepticism that slows down films of this type (including the upcoming American remake).
SHUTTER does tend to stop-down a bit as it enters its the last few reels. Like RING, it plays with the idea of laying a ghost to rest, only to have the horror continue unabated. Jane and Tun’s attempt to settle the karmic scorecard is not without interest, but it lacks the ticking time bomb plot device of RING. Also, there are a few moment that ring false or don’t ring at all (perhaps due to something being lost in translation).
WARNING: MINOR SPOILER
When Tun is informed that the friend he saw dive off a building is only the latest one to commit suicide, you wonder how the news never got back to him before. There is a moment with a young child, dressed like a monk, staring at Tun, the significance of which is not quite clear (even with a flashback specifically intended to clarify it). And the plot hinges on some photographs that Tun took, for reasons that don’t quite make sense: the audience guesses they were for blackmail, but it seems more likely they could have been used as evidence against the perpetrators, rather than coercion against the victim. Perhaps shame is such a strong force in Thai culture that it can explain why the victim would not want the photographs shown, but if the victim is ashamed of what happened, would the photos even be necessary?
END SPOILER
Despite some familiar sights and a very few blurry story elements, SHUTTER is well-composed snapshot of the land of the dead, exposing the supernatural in every shadow. Much of it you may have seen before, but as a college profession lectures in the film, the camera does not simply record reality; the lens interprets that reality, creating something unique, depending on the point of view. SHUTTER focuses clearly and cleverly on its ghost story, creating a creepy portrait of characters trapped in a darkroom with the dead. It may not disturb your sleep with nightmares afterwards, but while you are watching, it does deliver the shivers.

Regarding the young “monk” who can apparently see a ghost, it appears that he is actually a “Nain” (or “pre-monk”). The idea is that children have pure minds and can see things clearly that adults do not; a child how is a Nain would be especially able to see something spiritual, like a ghost.

The Tartan Asian Extreme DVD launches with an unstoppable montage of clips from the companies various releases. It’s not bad, but it is annoying to be forced to sit through it every time you pop the disc in the player.
Options include the original Thai track in DTS 5.1 and Dolby Digital 5.1 and 2.0, plus subtitles in English and Spanish. The English subtitles are easily readable and mostly free of the embarrassing typos and mistranslations that mare many of these Asian imports.
The film is divided into fifteen chapter stops – not quite enough to easily zero in on your favorite scene, but better than nothing. The transfer is good but slightly dark. Since this is a horror film that takes place mostly in shadows, the slightly murky image seems like part of the atmosphere, but it is easy to imagine a transfer that would prevent dark-clothed cast members from blending into the backgrounds.
Special features include an original trailer, an interview with the director and the cast, a behind-the-scenes featurette, and a collection of trailers from other Tartan Asia Extreme releases (A TALE OF TWO SISTERS, THE RED SHOES, THE MAID, THE GHOST, THE HAIRLOOM).
The “Interview” is actually a brief promotional piece, in which the two directors, Banjong Pisanthanakun and Parkpoom Wongpoom, talk about the research they did into Spirit Photography, allegedly obtaining books of real photographs from a university professor, plus additional shots from their friends. There are also snippets of Ananda Everingham and Natthaweeranuch Thongmee describing their characters. Overall, this is a piece that might whet the appetite of those who are looking forward to the film, but it offers little insight to anyone who has already seen it.
The “Behind-the-Scenes” feature consists of four segments, intercutting the directors’s comments with footage showing how scenes were shot: 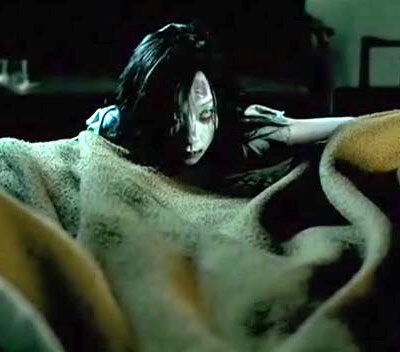