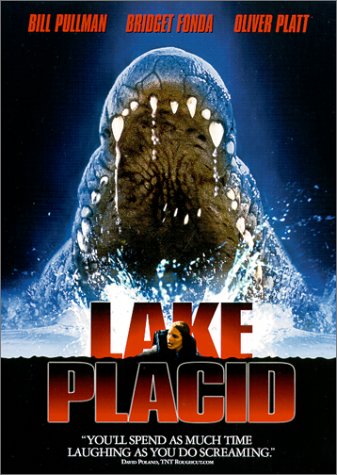 LAKE PLACID is the next step in the evolutionary process that led from JAWS to ANACONDA. The unlikely but amusing story has a JURASSIC-size Salt Water Crocodile showing up in an isolated lake not too far from the Easter Coast (having apparently migrated across the Atlantic). Needless to say, in order to keep the horror coming fast and furious, the beast has a metabolism like no retile on Earth, eating almost everything that comes into its path. A band of outsiders come to help the local sheriff capture or kill the monster, but the film never really address the obvious question: Why bother? The area around the lake is inhabited only by one crazy old coot (played by Betty White), who turns out to be feeding the animal cattle, as if it were some kind of oversized pet; so the risk to human life is almost nil, until everyone shows up to hunt the thing down, providing a virtual smorgasbord for the creature.
Fortunately, despite occasional lapses like this, the film is not bad. With its colossal crocodile having migrated to an unlikely cold climate, and with heavy doses of humor, the result could have been a real disaster. Surprise to say, the film is actually, by turns, both scary and funny, although seldom at the same time. Credit the schizophrenic nature to the weird combo of having Steve Miner (FRIDAY THE 13TH 2 and 3) direct a script by David E. Kelly (creator of ALLY MCBEAL). With its gory killing in a backwoods lake, the direction often revives memories of Jason and Camp Crystal Lake; while the writing enlivens the usual exposition scenes and stock characters (the local sheriff, the scientist, etc) with humor that makes the film fun to watch even when the monster is off-screen. The cast is good, playing the funny lines as humor that arises from the characters, instead of an exercise in camp, and it’s nice to see long-time horror film fan Bridget Fonda finally starring in a horror film (well, she did make a cameo in ARMY OF DARKNESS).
If there is a problem with the film, it is that the two elements of horror and comedy never completely gel: people who would enjoy the laughs might not want to sit through the severed limbs and decapitations, and the gore-hounds aren’t necessarily going to want to sit through the dialogue scenes. (Of course, now both groups can fast forward through their least favorite parts.) The special effects, especially the live-action mechanical stuff, are very impressive (although, as often happens, the CGI work sometimes has that tell-tell cartoony look). A true highlight is a sequence in which our heroes are menaced by a ferocious-looking grizzly bear, which is then–completely unexpectedly–attacked and consumed by the hungry croc; the sudden shift of the bear from predator to prey drives home the point of just how dangerous the marauding reptile is. Unfortunately, an attempt to invest the beast with mythic power falls flat (the film is too lightweight to support anything so heavy), and a last minute attempt to inspire sympathy and respect for the defeated monster works about as well as a similar goof-up in 1998’s GODZILLA. That said, the film is nevertheless entertaining, but if you want a really excellent alligator-on-the-loose movie, check out 1980’s ALLIGATOR, penned by John Sayles. The mix of humor and horror is balanced far better.
LAKE PLACID (Sony Pictures, 7/99). Directed by Steve Miner. Written by David E. Kelly. Rated R. With: Bill Pullman, Bridget Fonda, Oliver Platt, Betty White.
Copyright 1999 by Steve Biodrowski. This article originally appeared in the October 1999issue of Cinefantastique (Volume 31:8).