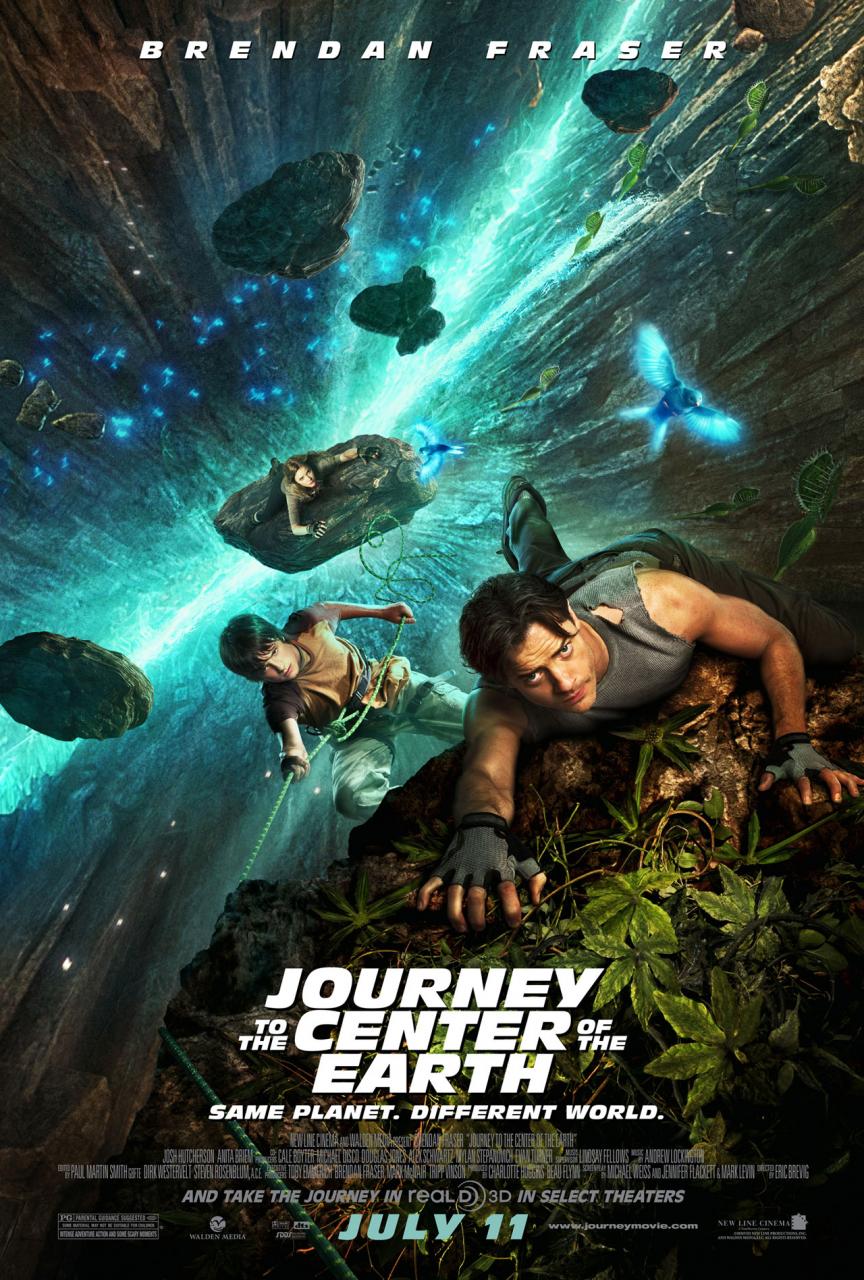 If you plan to see this movie at all, see it at a 3D engagement, because the spectacular computer-generated imagery – as often as not flying out of the screen and into your face – is the only reason for the price of admission. Otherwise, JOURNEY TO THE CENTER OF THE EARTH is awesome in its sheer ineptitude. Obviously designed as a showcase for stereoscopic effects – fish leaping into the lens, a bird fluttering in front of your nose – the film not only harkens back to the worst excesses of the brief 3D crazes in the 1950s and 1980s (when gratuitous effects were layered onto second-rate stories), it also plays out like a feature-length version of the short motion-simulation rides seen in specialty Showscan theatres or the 37-minute 3D thrill-ride ALIEN ADVENTURE (1999), which consisted entirely of the camera traversing the tracks of various computer-generated roller-coasters. JOURNEY recreates this aesthetic in a faux-dramatic setting; the thin narrative tissue ties the spectacular set-pieces together, but the phoniness of the CGI is much less palatable when you are ostensibly supposed to believe in what is happening.
Not that the filmmakers really care much about credibility. An early sequence aboard a runaway mine ride (tailor made for recreation at a theme park) has the mining cars fly over a gap in a bridge and safely land on the other side – a gag previously seen in INDIANA JONES AND THE TEMPLE OF DOOM. It was stupid back in 1984, and it is twice as stupid now. Speaking of stolen gags, JOURNEY also recreates a moment from BILL AND TED’S BOGUS JOURNEY, in which the characters are in free-fall for so long that they have time to stop screaming, catch their breaths, and then resume screaming. Originality is in short supply here.

Perhaps one should not expect too much originality from a remake; after all, we are really going to see how modern technology can visualize Jules Verne’s spectacular underground world. Much of it is beautiful, but the meager story and the juvenile tone undermine the excitement. The screenplay works on the premise that Verne’s story was factual, so there is an attempt, at least initially, to follow in the novel’s footsteps, but the effort to pump up Verne’s travelogue with a little dramaturgy works on the level of a bad made-for-television Disney movie.
Brendan Fraser plays a sort of absent-minded professor who learns to bond with his sullen nephew, who has retreated into his PSP console since Dad disappeared years ago – into the Center of the Earth, as it turns out. Their ill-fated rescue attempt hooks them up with a female guide (the nephew calls dibs on her, to no avail), who is at first characterized as professional and competent before the film demands that she become “hot” (almost literally so, as the rising temperature inside the Earth leads her to shed a layer or two of clothing, providing a clear view of those beautiful gams).
The special effects are variable in their effectiveness. They all present that artificial digital sheen, but sometimes their beauty is enough to overcome this. A friendly bird who teams up with the nephew practically steals the show (like one of those animal companions in a Disney film – e.g., Flit in POCAHONTAS), but the rampaging T-Rex is more than a bit chunky and clunky, apparently in need of a membership to the local gym. Many of the effects sequences are simply silly; in order to maintain a family-friendly tone, there is no real danger – no matter how high and how far the characters are hurtled, they will always receive a nice, soft, cushy landing.
The one exception is an imaginative (if scientifically unlikely) sequence invovling some “magnetic rocks” that form a sort of floating bridge across a vast ravine. The queasy feeling of walking on air (or at least on rocks floating in the air) yields some dizzying vertigo, especialy when the stones begin to wobble and spin, forcing the unfortunate rider to hold on for dear life as he turns upside down!
In the end, all of this adventure is supposed to serve as a basis for male bonding between uncle and nephew (the dialogue even points this out, in case you missed it), with the girl serving as the buffer to cut off any suspicion that the film belongs in the Hollywood closet. But it all boils away to nothing, like the steam in the volcano that shoots the heroes to safety. The attempt to evoke emotion is embarrassing cornball and borders on the offensively manipulative: the major moment is glossed over like an inconvenient blip in the plot so that the film can rush back into the action as if nothing had happened. Sure the film wants to be heartfelt, but not if it slows down the pace.
It is possible that undemanding pre-teens may find the adventure exciting, but their older brethren will probably dismiss it with a sneer, and adults are likely to be bored. JOURNEY wants to be simple summer fun for the whole family, but that is no excuse for being silly. When the guide shows up floating in an overturned T-Rex skull as if it were a makeshift boat, the image is just goofy enough to qualify as an intentional joke, but the movie never finds the right tongue-in-cheek tone that would turn its incredible events into a Munchausen-like tall tale in which the unbelievability is part of the charm.
Verne’s novel has yet to inspire a truly great film, and it probably never will. It offers some opportunity for spectacle, but the dramatic shortcomings are built into the material, forcing screenwriters to concoct some sort of characterizations and plot to fill in the blanks between the various dinosaurs, volcanoes, earthquakes, and other subterranean dangers. Maybe it’s time set Journey to the Center of the Earth back on the shelf and give Edgar Rice Burroughs Pelucidar books another go.

Despite his alleged expertise, Fraser’s professor is not a very good scientist. If he were, he would know that a journey to the center of the Earth is impossible. The massive megatonage from thousands of miles of rock creates pressure that leads to internal temperatures high enough to melt anything near the center of the Earth. That same pressure also prevents the melting process, because substances need room to expand when they liquify. Even if a cave or tunnel were somehow to form, it would immediately be filled with molten rock 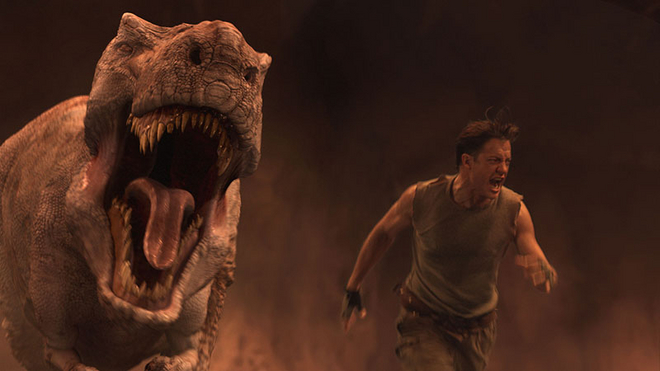 2008, Brendan Fraser, JOURNEY TO THE CENTER OF THE EARTH, Jules Verne