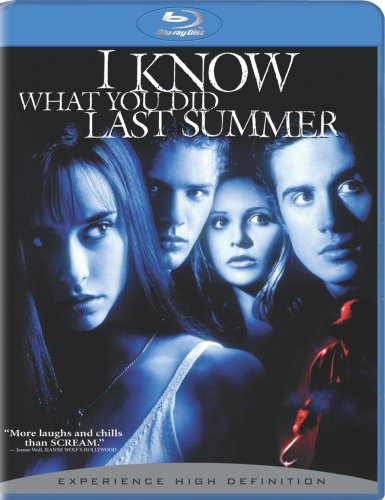 By the late 1980s, the slasher genre had run out of blood. It had its roots in Alfred Hitchcock’s PSYCHO (1960) and really got going with the release of John Carpenter’s HALLOWEEN (1978) and FRIDAY THE 13TH (1980). But endless sequels and rip-offs (PROM NIGHT, APRIL FOOL’S DAY, etc) churned out all-too-familiar stories, offering nothing fresh or innovative. By the 1990s, the sub-genre had all but died and was regulated to direct-to-video trash. In 1996, director Wes Craven and screenwriter Kevin Williamson took a smart, tongue-in-cheek look at the form with SCREAM, which changed all that and gave the genre its first $100 million hit. Following on the heels of that crossover success, Williamson has teamed with director Jim Gillespie and mined a Lois Duncan novel to create I KNOW WHAT YOU DID LAST SUMMER.
Duncan, the R.L. Stine of her day, wrote the book as a thriller for a young adult audience. In fact, minus the blood and guts, I KNOW WHAT YOU DID LAST SUMMER could easily be a Hardy Boys/Nancy Drew mystery. What makes this film special is the way it injects an energy long missing in the genre. Tracing back roots to the Marion Crane character in PSYCHO, the would-be victims here have committed a grave crime (in this case, a murder to cover up an auto accident) and are being repaid in a particularly grizzly fashion (systematically being hunted down and killed by a guy with a hook). The stage is set late one night on the sands of a deserted beach as the main characters trade on their knowledge of an urban myth which involves a killer with a hook for a hand. The audience is being clued in early, and when the mayhem begins, one can’t help thinking back to the story on the beach. It’s just these sorts of touches which elevate the film above the dreck that has come to define the genre of late.
I don’t mean to suggest that I KNOW WHAT YOU DID LAST SUMMER has rewritten the genre for all generations to follow. Far from that. It also falls prey to many of the conventions that have become part of the slasher cycle (staging a seemingly unrelated killing early on just to get the body count going, introducing red herrings involving some strange characters, etc).
While all slasher films are really about shock, few possess the level of intelligence this film does. I KNOW WHAT YOU DID LAST SUMMER succeeds, like SCREAM before it, by embracing core conventions while commenting on them in a way that makes them palatable for a larger audience. For example, when two of the teenagers involved in the cover-up approach a creepy house, one character references Jodie Foster as doing the same thing in THE SILENCE OF THE LAMBS only to meet up with a psycho.
I happily admit that the ending of this film made me jump out of my seat. And it was great to be affected that way. I can’t remember the last time a slasher film has provoked that response from me. If anything killed the slasher films, it was the fact that they relied on a core audience and then alienated that same audience by boring them to death. The difference between I KNOW WHAT YOU DID LAST SUMMER and a film like PROM NIGHT is not the content (the two films share surprising similarities); it’s the execution and the character development.
Before the killings even begin in I KNOW WHAT YOU DID LAST SUMMER, the film essays how the crime has psychologically affected the group which perpetrated it (an overbearing sense of guilt and the loss of their life’s ambition plague them). Compare that with the carloads of one-dimensional teenagers sent to their doom at Camp Crystal Lake. The biggest crisis any of those teenagers faced was whether or not they were going to get laid. I KNOW WHAT YOU LAST SUMMER also boasts a cast of fresh young actors, including Sarah Michelle Gellar (BUFFY THE VAMPIRE SLAYER), and the engaging Love Hewitt (a regular on the Fox TV teenager hit PARTY OF FIVE). The mix here works to maximum effect, creating audience anticipation and delivering on promised shocks.
One cop out: just before the final shocker, the screenplay exonerates the remaining characters of their heretofore mentioned guilt in a way that is meant to be cathartic but ends up being irresponsible.
I KNOW WHAT YOU DID LAST SUMMER (October 1997). Directed by Jim Gillespie. Screenplay by Kevin Williamson, basedon the novel by Lois Duncan. Cast: Jennifer Love Hewitt, Sarah Michelle Gellar, Ryan Phillippe, Freddie Prinze Jr., Bridgette Wilson, Anne Heche, Johnn Galecki, Muse Watson, Stuart Greer.
Copyright 1998 by Anthony Montesano