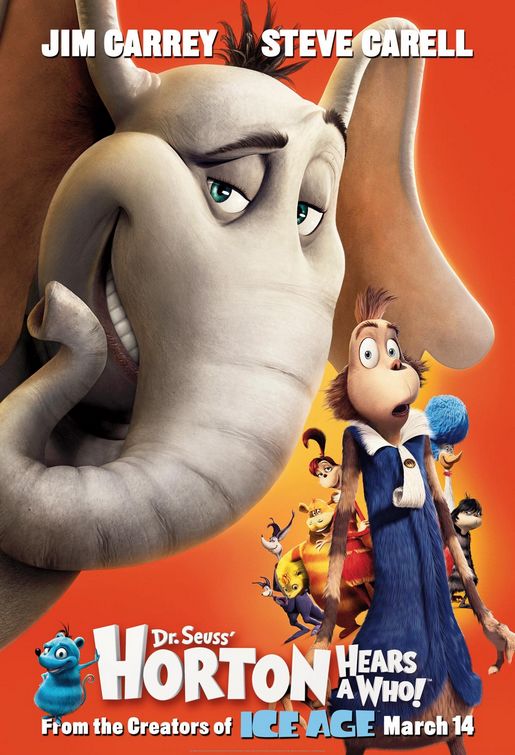 “And so all ended well for both Horton and the Whos, and all in the jungle…even kangaroos.”

So goes the narration (offered up by Charles Osgood from CBS NEWS SUNDAY MORNING) at the end of DR. SEUSS’ HORTON HEARS A WHO! – the latest attempt to bring a Dr. Seuss tale to the big screen. The difference between this effort and previous tries—or trials, as the case may be (THE CAT IN THE HAT, HOW THE GRINCH STOLE CHRISTMAS)—is that this tale really does end up well. A person may be a person, no matter how small, but this movie sure isn’t; it’s entertaining in a rather big way.
Brought to us by the same folks who charmed millions with the ICE AGE films (with yet another one due out in 2009), HORTON also charms in its own way. With excellent source-respecting animation and a general plot that remains faithful to the endearing story and imagery of Seuss’ original fairy tale, this Horton feels both nostalgic and contemporary at the same time. One could quibble about that contemporary and more frenetic feel, but that can generally be forgiven because of the strengths and care for the source material that the film embodies. Yet, it would have been more fun to hear the characters speaking in greater Seussean rhyme. This was always part of the delight of the classic book as well as the 1970 TV version, as directed (and even voiced) by the incomparable Chuck Jones of Looney Tunes and Tom & Jerry fame.
So, I suppose that I did find myself missing some of the elements of Seuss’ book and the old TV version (in which Seuss also took part, lending lyrics to songs and the like). The Horton in those versions felt decidedly more laid back in action and voice, yet he was also quite lovable and easy to root for. However, Jim Carrey’s (the upcoming A CHRISTMAS CAROL, THE NUMBER 23, and yes, HOW THE GRINCH STOLE CHRISTMAS) Horton was rather lovable in his own way as well. It did take a little more adjusting for me, however (and I wondered what a different actor might have brought to the part). Still, all-in-all, I did find the whole experience quite appealing.

Steve Carell (TV’s THE OFFICE, EVAN ALMIGHTY, and the upcoming GET SMART) also pleased with his interpretation of the Mayor of Who-ville. It was also nice to see Carol Burnett (a TV icon and host of the CAROL BURNETT SHOW for many years) back in the game, so to speak, as Jane Kangaroo, the nasty conformist who doesn’t believe Horton hears a Who or anything else and tries to snap him back in line. The whole thing is narrated quite comfortingly by Mr. Osgood – a nice choice, I thought.
I have to admit that This Dr. Seuss story has always been one of my favorites because of its message (which is essentially that all have worth) and its exploration of the fact that there is more to the universe than we can ever truly understand, and that worlds can exist within worlds—all quite intriguing and revealing thoughts to a young mind. Thus, when Horton hears a faint cry for help coming from a tiny dust spec floating through the air and vows to protect the inhabitants in it and take the spec to a place of safety, we’re off on a joyous journey of fun…and morality. Horton’s biggest obstacle is those who do not believe in what they do not already know and their attempts, led by Jane Kangaroo, to hold on to their conformist views—by force if necessary.
There are also plenty of references tucked into the film’s layers for those looking out for them. One can spot quotes or nods to anything from 1951’s THE THING FROM ANOTHER WORLD to APOCOLYPSE NOW to John F. Kennedy’s speech involving the placement of man on the surface of the moon. What made these fun for me was the fact that they weren’t quite as in-your-face as the references in other animated films, such as the SHREK offerings. But anyone looking for contemporary hip can certainly find it in a variety of spots, like a traditionally animated scene that lovingly pokes fun at the current Japanese anime trend. A bit odd perhaps, but it does work and I found myself chuckling.
Yes, the film does take some liberties and not always in a positive vein. However, its makers do love the source from which they’ve borrowed and that does shine through in this light yet witty and appealing entry into the CGI world of animation. The Fox animation team may not be quite Pixar, but they’re working hard at carving out their own territory in this world, and with works like the ICE AGE films and HORTON HEARS A WHO! it looks like they’re doing a nice job at it. With HORTON they managed to do it within a ‘G’ rating nonetheless! That’s quite a big deal in today’s climate of film-making. Kudos to all involved.
If you’re not a kid anymore, but you’ve got some, take ‘em to see this happy 88-minute film. If you don’t, remember that you were one once and treat yourself.

3 Replies to “Horton: a Dr. Seuss Film That Works!”