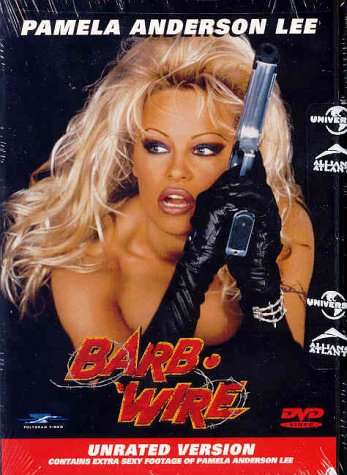 Chuck Pfarrer’s so-called script is basically a distaff version of CASABLANCA (!) with Lee playing the Humphrey Bogart role in 2017, when America is controlled by the neo-fascist Congressionalist Army. Barb Wire (Lee) runs a bar in Stelle Harbor, the last “free” city in the country. Back into her life comes former lover Axel (Morrison), a resistance fighter now married to rebel leader Cora D (rowell), who carries the cure to the government-crated super-HIV virus in her blood. Axel asks Barb to help him recover a pair of contact lenses that will allow Cora to get past the government’s retinal scanners and into Canada, where they can synthesize the vaccine. Wire tells him to get lost but changes her mind when her blind brother (Jack Noseworthy) is killed by Railsback’s insanely evil Congregationalist officer.

The ending deteriorates into a series of martial arts battles atop construction equipment, featuring Morrison and some stunt men, while Lee and Railsback spit at each other while dangling from a crane. Whoever thought Lee, with her Barbie doll body and Betty Boop voice, could be even marginally convincing as a tough action heroine must be living in their own comic book universe! No wonder the film made only $1.8-million its opening weekend. This is the fans’ payback for Gramercy’s decision to open BARB WIRE wide and stick MYSTERY SCIENCE THEATER 3000: THE MOVIE on only 26 screens.

Copyright 1996 by Dan Cziraky. This review originally appeared in the August 1996 issue of Cinefantastique (Volume 28, Number 1).