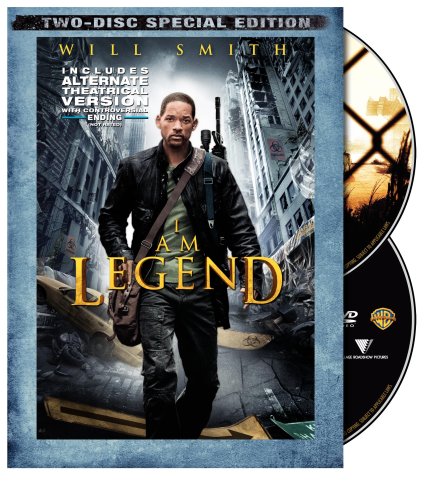 The third official adaptation of Richard Matheson’s I Am Legend  is by far the best of the lot,  thanks in no small part to Will Smith’s performance as Robert Neville, but the film suffered from a weak third act and an unconvincing denouement that too obviously revealed the heavy hand of Hollywood post-production tampering. It was no secret that the conclusion underwent a last-minute alteration, leaving fans to hope that the original version would surface on DVD. It has, on Warner Brothers’ Two-Disc Special Edition DVD, which offers both the theatrical cut and an alternate cut with an additional scene and the original ending. Unfortunately, this new version fails to take the film that final step toward the greatness that it fell just short of reaching.
Smith’s thoroughly believeable portrait – of a solitary man surviving in a world where the rest of the population has been reduced to night-lurking monsters – goes a long way toward turning this action-horror film into an in-depth character study. Although the film supplies the expected gunfire, explosions, and car stunts, Smith never turns Neville into an invulnerable action hero. He perfectly registers a combination of distress, despair, and fear (when confronting the Dark Seekers in their lair) that captures the borderline mental breakdown of a character coping without human companionship, whose only friend is a dog (one of the screen’s most memorable canines).
In fact, I AM LEGEND provides such an excellent show case for a virtual one-man performance, and Smith rises to the challenge so well, that the film borders on genre classic status. Sadly, the story starts to fall apart when it is revealed that the “Last Man on Earth” is not alone, and the initial intensity of horror dissipates in the light of day – or rather, in the neon glow of the computer-generated imagery that provides the unconvincing “Dark Seekers.”
Most of the flaws stem from the ill-advised decision to base I AM LEGEND as much on 1971’s THE OMEGA MAN as on Matheson’s novel. The original story was a clever attempt to craft a science-fiction version of the vampire legend, in which the hero spent much of his time sifting fact from fiction, determining exactly how much these blood-drinkers truly resembled the creatures of folklore. THE LAST MAN ON EARTH, the first film version of the book, retained this plot element, but OMEGA MAN substituted biological warfare that resulted in mutant humans who shunned the sunlight.

Warner Brothers’ Two-Disc Special Edition DVD offers the Theatrical Version on Disc One and the Alternate Version on Disc Two. Both versions are divided into 27 chapters, which are identically entitled until the alternate version inserts an extra chapter (called “Icy Inspiration” because Neville gets the idea that lowering his test subject’s body temperature may improve his experiment’s chance for success) at Chapter 21.
After Chapter 21, the alternate version picks up with Chapter 22, “Marley’s Namesake” (which is Chapter 21 in the Theatrical Cut) and continues to follow the Theatrical Cut through the chapter entitled “I Can Save You” (Chapter 24 in the Theatrical Cut, Chapter 25 in the Alternate Cut). The Alternate Cut then omits the Theatrical version’s Chapters 25 and 26 (“Exit Strategy” and “His Legend”). In their place, is Chapter 26, “Reunion and Revelation.” The Alternate Cut’s final scene – of Neville, Anna, and Ethan driving out of the city – is included as part of Chapter 27, which contains the closing credits in both versions.
DVD BONUS FEATURES
Apparently, this double DVD is Warner Brother’s trial balloon for moving into the world of digital downloads and copying. Bonus features available for your DVD players are limited to four animated comics. The other bonus features are accessible only through the DVD-Rom drive in your computer. (Beware: This is one of those DVDs that self-starts via its own software application when you insert it into your drive. If you want to use your computer’s DVD-playing software, you must shut down the automatic application; otherwise, you will get a message incorrectly informing you that no DVD is in your drive.)
The “Animated Comics” are little vignettes, mostly unresolved, showing the impact of the virus around the world

DVD-ROM BONUS FEATURES
Both discs contains bonus features accessible only through the DVD-Rom drive on your computer. On Disc Two, the feature is clearly identified on the menu visible when watching the disc in your DVD player. Disc One is less clear; if you do not look closely, you might not realize there is reason to pull the disc out of your player and put it in your computer.
On Disc One, there are two featurettes that you can launch by clicking on links that open Windows Media Player: “Cautionary Tales: The Science of I AM LEGEND” and “Creating I AM LEGEND.” The video quality is good but no match for a full-screen DVD resolution, and you will have to wait for the video to download onto your computer – which can eat up too much time when going through the multi-chapter “Creating I AM LEGEND.”
CAUTIONARY TALES: The Science of I Am Legend
This featurette makes a token effort at suggesting the film’ s portrayal of virology is scientifically accurate, at least in terms of Smith’s performance as a virologist. However, this is mostly a mini-documentary featuring alarmist interviews from real scientists about epidemics and dealing with them. There are a few clips of Smith, screenwriter Akiva Goldsman, and director Francis Lawerence discussing the virus in movie, but 90% of the interviews are with virologists.
CREATING I AM LEGEND

Disc Two, which contains the Alternate Cut of the film, offers a DVD-Rom special feature that allows you to make a digital copy of the film on your hard drive. This is not a download, but you must log on to the Internet to input a code that unlocks DVD for copying. This copy can then be loaded onto portable video devices.
RELATED ARTICLES: