After hiring on as a director to projects developed without him (PEE WEE’S BIG ADVENTURE, BEETLEJUICE, BATMAN), Tim Burton showed what he could do when he developed a project of his own. The result is this sweet 1990 fantasy that for the first time crystallized the latent themes in the director’s work: the notion of the artist as outsider, of skills that make one special but at the same time different. A sweet but tragic fantasy, the film borrows much of its imagery from Gothic-styled genre films (the lone scientist [Vincent Price] creating an artificial being) but stops just short of going full-tilt horror (Edward’s frustration at not fitting in never quite leads to a CARRIE-like revenge-rampage). Although there seems conventionally-minded critics who prefer ED WOOD for its well-written drama, EDWARD SCISSORHANDS is probably Burton’s best live-action fantasy.

Decades later, the film remains Tim Burton’s finest work as a director. His visual style has always been inventive, imaginative, quirky, and entertaining, but more often than not you rely on the high points to carry you past the awkward moments; his films tend to be great collections of bits and pieces rather than organic wholes. Yet Edward Scissorhands really does work as a complete film, mixing a fairy tale sensibility with a satiric view of life in the suburbs and crystallizing for the first time the essential themes underlying Burton’s work. (Burton’s other truly great film is his producing effort Tim Burton’s Nightmare Before Christmas, which was also written by Caroline Thompson. Coincidence? We think not?)
The titular character (played with moving pathos by Johnny Depp) is a symbol of the Artist as Outsider. His talent (trimming topiary animals or fashioning women’s hair styles) derives from the physical abnormality from which he gets his names; the very characteristic the separates him from everyone else also makes him special. Ten years after David Lynch’s take on The Elephant Man, Burton displays a similar take on a similar idea, although brushed with more colorful strokes. Like Lynch, Burton shows a fascination with the unusual and the bizarre that urges you to look closer rather than turn away in disgust and it’s not just because of the humanity underlying the deformed exterior. For Burton (and for Lynch) the way their characters look is actually part of who and what they are. The unfortunate aspect is mostly the negative reaction provoked in other characters; the director’s camera lens, on the other hand, encourages you to experience a sense of wonder.


Since this film, it’s been clear that all of Burton’s work is about demented artists either isolated in their own little worlds (Pee Wee Herman, Batman) or trying to refashion the world to suit themselves (the Martians in Mars Attacks, who seem to delight in destruction for the sheer joy of doing it). Edward stands apart from these others because his is the sweetest, most innocent soul. Although the story briefly flirts with turning him into a vengeful monster a la Carrie, his ‘rampage’ consists merely of chopping down a shrubbery and deflating an automobile tire before he reverts back to his previous quiet and withdrawn self. The message seems to be that the gulf cannot be crossed that separates Edward from the rest of the world, and the film ends on a bittersweet note, with Edward and the love of his life (Winona Ryder) forever separated, although their brief time together remains the most significant element of their lives (think Titanic). It’s a guaranteed multi-hanky experience even for the most jaded viewer. 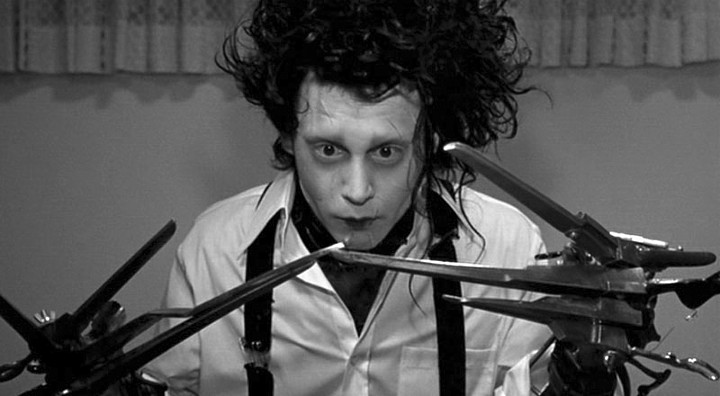 The drawback here is that, as much music as there is, there are still long stretches without any, and Elfman’s commentary doesn’t fill in all the gaps. So inevitably, you are left watching a literally silent movie for uncomfortable stretches of time. You’ll feel your finger reaching for the fast-forward button, but don’t overuse it, because you don’t want to miss any of Elfman’s comments when they do arise. (What would be really nice would be if DVDs could be set up with chapter stops specific to the audio commentary, allowing viewers to skip the dead zones.)
Anyway, it becomes immediately clear that Elfman loves the movie and is proud of his work on it, which he calls ‘perhaps my favorite.’ He mentions his appreciation of his working relationship with Burton, who allows much of his eccentric sensibility to show through when other directors would want to tone it down: ‘Tim, thank god, let’s me get away with that stuff.’ He also specifies tricky moments, such as flashbacks to the inventor’s machinery, which suggested a certain tempo for the music; the only problem wasthe rhythm of the machines was not constant from cut to cut in the sequence!
In other places, Elfman credits Burton for the choice of source music (such as several Tom Jones songs, including ‘It’s Not Unusual,’ which would later show up in Mars Attacks! ). He also credits actress O-Lan Jones for her brief organ performance seen in the film; Elfman calls the music an original composition, although it strongly resembles a traditional Christmas carol (which makes sense, as scene is set during the Christmas season).
Elfman claims that this was a job he never wanted to end. ‘When it was done, I wanted to keep writing variations… I wished I could keep doing it forever.’ In a way, those variations do continue: Elfman calls this music ‘his most copied score,’ adding, ‘In one or two films per year, since then, variations of ‘Edward’s Theme’ keep popping up in film scores…. Worse than that is the television commercials!’
Edward Scissorhands was not a blockbuster hit like Batman, but it is the far more profound and personal work. This is Burton’s most perfectly realized film as a director, and for fans this is really the essential film. There’s a sad sweetness to it that imbues the usual exaggerated production design and visual stylings with some genuinely moving emotion. Even for people who don’t like fantasy, this film is a wonderful experience, filled with warmth and humor. Despite the occasional gaps in the audio commentary, the DVD offers the great special features that a film of this caliber deserves.
NOTE: The 2006 “tin case” collectors edition recreates the old 10th anniversary edition in new packaging.