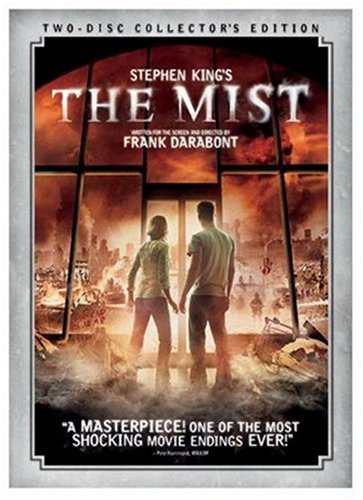 Director Frank Darabont has made a cottage industry out of bringing Stephan King stories to the screen. In the past he has done big-budget adaptations of THE SHAWSHANK REDEMPTION and THE GREEN MILE. Finally released from prison he decided to adapt THE MIST, a short story from King’s Skeleton Crew collection. The fact that THE MIST was a failure at the box office has not stopped Dimension from giving it the deluxe two-disc “Collectors Edition” treatment. As with the film, the sum of the parts of the DVD is better than the whole.
As Steve Biodrowski pointed out in his review of the film it has major structure problems – the first half is engrossing and taunt while the second half falls apart as a sloppy metaphor married to a TWILIGHT ZONE ending, albeit a bleak one. It’s the tone of the times, a post 9/11 sensibility that underlies not only THE MIST but also CLOVERFIELD and Romero’s DIARY (and LAND) OF THE DEAD, much like the films of the 50’s reflected fear of Communists and the Bomb. Darabont emphases this link by using a very 1950’s sounding air raid siren as the mist first begins to overwhelm the supermarket.
THE MIST is not a particularly original idea – you can trace it back to THE TROLLENBERG TERROR (a.k.a. THE CRAWLING EYE) and more recently to Carpenter’s THE FOG. Still, there are things that I liked a lot about THE MIST – the overall quality of the acting, the intense claustrophobic mood and authentic feel of the situation (especially in the first half of the film). Darabont’s major sin in the film is the so-called “controversial” ending. While King’s original story ended on an existential note, Darabont felt compelled to tack on an unmotivated and nihilistic ending. This, unfortunately, also robs the film of any sense of mystery.

Audio Commentary by Writer-Director Frank Darabont
Audio commentaries in the wrong hands can be insufferable ego trips or worse, pointless and boring. Darabont’s enthusiasm and affection for his film makes his solo audio commentary lively and somewhat interesting. However, it is not a master class in filmmaking.
He has an annoying habit of constantly referring to his cast and crew as “fantastic0,” “dear friends,” “a favourite,” and “terrific”. For the most part he ignores his screenplay chores and focuses his commentary on directing (understandably) and his challenge to direct a low-budget film ($18 million). You might expect an undercurrent of bitterness from a director used to working on high-budget films like THE GREEN MILE and THE MAJESTIC; however, to his credit, he stays upbeat and down to earth. And that’s what makes him fun to listen to.
It’s obvious that Darabont is in love with every element of the film, though his optimism often blinds him to some of the obvious failings. For example he devotes a lot of time discussing his “set piece” in the middle: scene 35, a ten minute sequence where the bug and bird creatures run amok in the supermarket. Unfortunately, scene 35 is fraught with problems – it is too long and lacks intensity and logic. And this exposes one of Darabont’s major shortcomings; he is not a very good action director. He fails to understand that directing action has its own rhythm and grammar and is more than just running around with a Steadicam shooting lots of footage.
In contrast the scene that follows in which some of the characters go to the drugstore next door is a very effective piece of tension and horror.
Shortcomings aside, I really got to like Frank Darabont through his audio commentary. He is a true fan who loves the genre, his cast and crew, and the job that he is doing. I just wish that the resulting film had been a little better.
Deleted Scenes
“Deleted Scenes” in this case might be a little misleading. These eight “deleted scenes” are more just bits and pieces of dialogue excised out of scenes to shorten them. It might have been better for the finished film if Darabont deleted entire sequences to make the film tighter. There is an optional audio commentary by Darabont if you are interested in why he made the decision to cut this footage.
There is nothing of real interest here, and it is hardly worth checking out this feature.
Drew Struzan: Appreciation of an Artist
Drew Struzan certainly deserves more recognition than this abbreviated featurette gives him. He has created a large number of the seminal movie posters of our time including BLADERUNNER, STAR WARS, INDIANA JONES, THE THING (remake), ET, HARRY POTTER, and the posters for Darabont’s SHAWSHANK REDEMPTION and THE GREEN MILE.
The featurette offers very little in the way of information and background on Struzan, who serves as a model for Thomas Janes’ character in THE MIST.
Webisodes
I guess it is requisite today that every important film has to create online buzz by giving glimpses on set. Peter Jackson used this during the making of KING KONG to keep the fans tuned in and talking as the production progressed.
I like the idea of creating viral buzz around a production. Darabont himself introduces each of the three webisodes to give a peek behind the scenes. On the Internet, ahead of the release of the film, these would have been intriguing. Here, in an already bloated package they do not add anything.
Trailers
The three theatrical trailers indicate the different marketing approaches. The original sells the film as a straight out horror-mystery; the second shows a lot more monster action, and the third emphasizes the tensions between the characters.

Black and White Version with Introduction by Frank Darabont
Darabont, in his introduction claims, that this should be considered “the Director’s Cut.” Apparently he wanted to shoot THE MIST in black and white, but the studio was reluctant (no surprise there). Instead, he compromised by digitally removing the color from the film to create his black-and-white version.
And here lies the problem. Black-and-white films have a very specific quality, created by lighting, set design, costuming and make up. As Darabont points, out black-and-white by its very nature has an unreal feel. However, decolorized black and white just feels artificial. Darabont uses a contemporary documentary style of cinematography that further emphasizes this artificiality. The film is a color film, best viewed in color; believe me, I have endured both.
When Darkness Came: The Making of THE MIST
I have to admit I am a sucker for these making-of documentaries. This one is better than most, a lively half-hour look at every aspect of the production. It is a nice balance of behind-the-scenes interviews with the stars (and many of the supporting players) and the actual shooting.
It probably would have been better if Darabont had just stopped there, but alas we move on to some shorter featurettes covering creature design (tacky) and visual effects (also tacky).
And of course, the afore-mentioned Scene 35 is covered in its own featurette – “Taming the Beast: Shooting Scene 35.”
Darabont spent six days working on this scene, which is the major action sequence in the film. You can see where he went wrong almost right off the top, when he begins to scrap the storyboards and improvise on set. He also loses sight – among all of the monsters and mayhem in the scene – that we still need to be involved with the characters, to feel what they are feeling and experience it through their eyes.
Monsters Among Us: A Look at the Creature F/X
The film would have been better if we had seen less of the creatures; it would have been more effective to use the mist to cloak them in mystery. But with today’s out-of-control CGI that isn’t going to happen. The resulting creatures all look derivative and have an almost television low-budget look. I also found it telling that no one mentions the debt they owe to H.P. Lovecraft, whose Cthulhu Mythos obviously inspired the look of the creatures in the mist, especially the Road Strider at the end.
The Horror of it All: The Visual F/X of THE MIST
One of the essential things on which I would have appreciated more detail was how the mist effects were created. Instead we get a rehash of the effects that have already been covered in the previous featurettes.
While THE MIST has many shortcomings, there is still much to be admired. Director Frank Darabont at least tries to bring us something intelligent and involving as opposed to much of the torture porn that passes for horror today. In the final analysis it might be a failure, but at least it is a noble one.