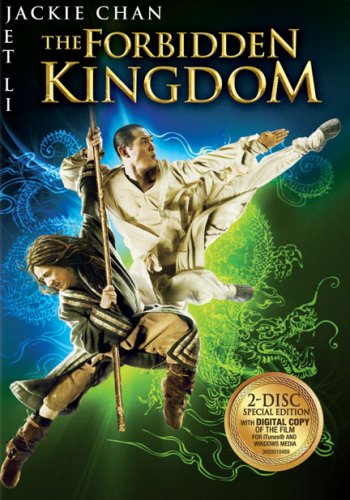 Over the years, I have interviewed several screenwriters of American made martial arts films, and each has boasted how they are working on a screenplay for Jackie Chan and Jet Li, where the top two, living and still fighting on celluloid, martial arts screen legends of all time, were totally up for making the film.  For whatever reason all those scribes failed, it was the silent one, John Fusco, a true practitioner of the martial arts, where ego and boasting are not important, he is the one that won over the hearts of Jet and Jackie to finally come together to etch his name into the annals of martial arts cinematic history folk lore.
The Chinese martial arts movie dream team, the real dynamic duo of kung fu, Jet and Jackie fighting against each other and for each other, eclipses anything Hollywood could ever had hope for, which included their one time Schwarzenegger-Stallone pipe dream team, something that ego prevented and money could not buy.  Yet with Jackie and Jet, it was the spirit of the martial arts that coagulated the current blood of today’s kung fu film, to create a permanent battle scar that everyone would be proud to wear as a reminder of a true historical meeting between two great martial arts powers.  Only Bruce Lee vs. Sonny Chiba would have been comparable.
As one expects with any film these days, to finally get that DVD, at least in this case, is something more special.  To be able at a whim to watch history over and over again, to recapture a moment of time like an old episode of Mike Wallace’s TV show BIOGRAPHY, where rare footage of the subject added such dynamism to the story, THE FORBIDDEN KINGDOM comes to DVD with some fantastic special features that cements this magical anticipated moment that only a Beijing opera star fighting a wu shu athlete could transcend.
The saga traces the journey of an American teen, Jason Tripitikas (Michael Angaran), who while hunting down bootleg kung fu DVDs in a Chinatown pawnshop makes an extraordinary discovery that sends him hurtling back in time to ancient China.  Upon landing, Jason is charged with a monumental task: he must free the fabled warrior the Monkey King (Li), who has been imprisoned by the powerful Jade War Lord (Collin Chou; MATRIX: RELOADED).  Joining Jason on his quest is an inebriated kung fu master Lu Yan (Chan), the stolid Silent Monk (Li again) and the fledgling Golden Sparrow (Liu Yi-fei).  But only by learning the true precepts of kung fu can Jason hope to succeed in his mission and in a very WIZARD OF OZ-like motif, find a way back home.
To listen to the commentary by screenwriter Fusco conversing with director Rob Minkoff, simply adds a new dimension and appreciation for the steps, processes and coming together of all the individual elements that made FORBIDDEN KINGDOM possible.  Like a soaring eagle capturing the vector updrafts rising from a valley, Fusco’s firm grasp of martial arts and martial arts cinema provides valuable insights and cool stories that elevates the flight of the film to peaks where only the strong birds of spirit can bring clarity and understanding.
Besides the film itself, the special features section of Disc 1 also contains several other valuable slices of FORBIDDEN KINGDOM movie marvelry and wizardry, which include:  The Kung Fu Dream Team, featuring interviews and behind the scenes footage with Jackie, Jet, Fusco, Minkoff and the old master himself, Yuen Woo-ping; Dangerous Beauty, where with interviews and more behind the scenes footage, we are introduced to the characters and actresses that played Golden Sparrow and the Bride with White Hair, Liu Yi-fei and Li Bing-bing respectively; Discovering China, a historical map showing the path trodden to finding the awe-inspiring and beautiful Chinese landscapes used in the film; Filming in Chinatown allows the audience to visit the largest movie studio lot in the world, Hengdian World Studios, where not only most of the great fights were shot, but also where Boston Chinatown found its way into China; Monkey King and the Eight Immortals, which starts off showing Fusco practicing authentic martial arts (not cinema stuff) leading into descriptive histories of who the Monkey King and the Eight Immortals were and their place in real martial lore; Blooper Reel, which features some truly funny outtakes with Jackie, the kind that do not look rehearsed like from some of his RUSH HOUR films; and Deleted Scenes, where Fusco and Minkoff describe the scenes and their setups that never made the final cut.
Audio choices include English 5.1 Dolby Digital EX or English 2.0 Dolby Digital, which can be viewed in conjunction with English or Spanish subtitles.
The Lionsgate release also includes a Disc 2, which features a digital copy of the film that can be downloaded onto either your PC or MAC, where it can subsequently be transferred to your video enabled iPod, iPhone or Apple TV.

But the bottom line to all of this, truly comes down to what all kung fu film fans have hoped for, nay, prayed for…the time when Jackie Chan and Jet Li cross hands beyond the boundaries of Hollywood’s lack of vision and letting these living legends really demonstrate their martial arts abilities, as evident by the DVD describing that one section of one fight was had 120 takes.  It is the power of Jackie and Jet, under the scrutinizing and perfecting eye of Yuen Woo-ping.  Ultimately we must thank Fusco for having the right vision to inspire and bring together the three proverbial masters into one master film.