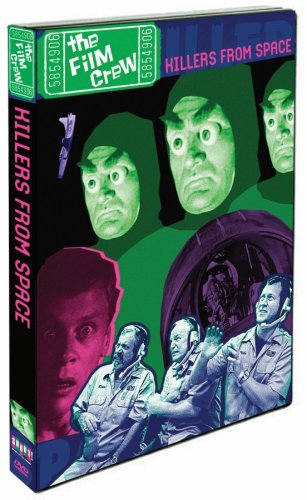 As mentioned in this previous review, THE FILM CREW is an attempt by MYSTERY SCIENCE THEATER 3000 alumni Mike Nelson, Bill Corbett, and Kevin Murphy to recapture a little of the old magic in a direct-to-video DVD format. The trio play blue-collar workers, apparently in a mechanic’s garage, who are assigned by their boss to provide audio commentaries for bad movies. In effect, this is MST3K without the silhouettes of the characters seated in a theatre. You get the same kind of jokes, but since this is not a television show, there are no commercial breaks, and there are fewer interstitial segments with the cast goofing around. This disc’s entry is WILD WOMEN OF WONGO, a reasonably ridiculous 1958 flick, set 10,000 years ago, in the village of Wongo – where, according to the opening narration delivered by Mother Earth, she and Father Time have conspired to make all the men ugly and all the women beautiful. A nearby village suffers from the exact opposite problem, and when a handsome emissary arrives in Wongo to seek help fending off an invading tribe, the Wild Women of Wongo fall head over heels, much annoying their men. After much mutual hostility, everything settles pretty much as you would expect: the men and women of either tribe pair up with their appropriate counterparts.
WILD WOMEN OF WONGO is certainly bad enough to warrant ridicule. The contemporary hair styles of the Wongo women are a real hoot, as is their cave-woman-type attire, which is supposed to look as if made from animal skins but which is fashioned and cut exactly like a modern one-piece bathing suit.
Unfortunately, this is one of those films whose badness resides principally in boredom. Director James L. Wolcott has no idea how to stage action or use camera angles and editing to compress screen time, so you see a lot of people walking from here to there, waiting around from the temple door to open, walking into the temple, encountering the temple priestess, then walking down the temple steps to consult the temple god (an alligator obviously filmed at another location). This results in some long, long, and very dead passages that are an open invitation to caustic comments, but there is one big problem: there is not much funny to say about shots consisting simply of people walking around doing nothing.
This fact helps illuminate the good judgment of the original MYSTERY SCIENCE THEATER 3000, at least during its initial run on Comedy Central. Original host Joel Hodgson and his robot companions were always at their best when blasting away at films that were hysterically outrageous and absurd, not merely boring, and they did a good job of picking titles that played to their strengths. Faced with the tedium of WILD WOMEN OF WONGO, on the other hand, The Film Crew give it their best college try, but there just are not enough jokes in all the world to make the viewing experience a joyfully giddy one. Still, you gotta give ’em credit for trying.
The interstitial segments suffer from the fact that the childish antics do not seem so cute when acted out by adults instead of toy robots. The opening gag has Mike and Bill mistake Kevin for the hooded figure of Death just because he is wearing a parka. The mid-film break features a bit with Kevin identifying Wongo on a map that also contains Narnia, Middle Earth, Fantasy Island, Atlantis, etc.; it is mildly amusing but goes on too long. The closing echoes back to MST3K’s old invention exchange, with Bill revealing a contraption that matches people up to their ideal mate based on physical attractiveness – a nice attempt to make a satirical comment on the values espoused by WILD WOMEN OF WONGO, but it falls flat in the execution.
The DVD includes two bonus features: In the first, Mike, Kevin, and Bill are compelled to dance thanks to a cutaway to a shot from the film, in which the Wongo priestess orders her flock to dance. It’s a goofy bit of physical comedy that suggests The Three Stooges, but none of the trio can match Julia Louis Dreyfuss’s appalling footwork in the SEINFELD episode “The Little Kicks.”
The second bonus is a riff on the film’s finale, in which the actor’s, paired up with their mates, break the fourth wall by turning and winking at the camera. The Film Crew re-stage the scene with cardboard cutouts standing in for beautiful women. Unfortunately, Bill has trouble winking on cue, so Kevin resorts to a little “Method Directing,” squirting him in the eyes with rubbing alcohol. It’s a funny bit, but probably not as funny as the sequence it spoofs. WILD WOMEN OF WONGO may be one of those films so bad that it becomes its own parody (like the Tom Cruise Scientology video that appeared on the Internet a week ago); anything else is somewhat redundant.
RELATED ARTICLES: The Film Crew – Killers From Space – Plan Nine from Outer Space (with audio commentary by Mike Nelson)