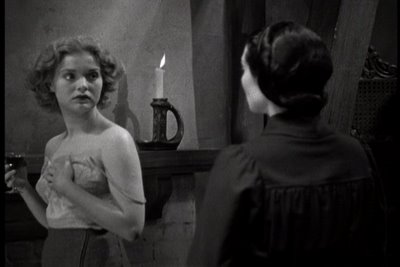 DRACULA’S DAUGHTER, the last of the first wave of classic horror from Universal Pictures in the 1930s, never established itself as a fan favorite, yet it has come to be highly regarded in some circles (particularly those interested in finding homoerotic undertones in mainstream commercial pictures). Upon recenti viewing, the film turns out to be more entertaining than remembered, but it’s still wildy overrated. Its reputation rests mostly on one suggestive, implied lesbian scene, which is actually pretty good, but then you have to sit through the rest of the movie, which has a bit of trouble linking vampire Countess Maria Zaleski to Count Dracula. Zaleski claims to be Dracula’s daughter at one point, but she also has childhood memories of her mother playing soothing harpsicord music. So she was Dracula’s daughter by a human mother? She had a normal happy childhood before her father…what? Bit her?
And don’t get me started talking about the male lead, a psycho-therapist who thinks he’s curing a patient of a mental disease when in reality she’s a vampire. Gloria Holden is good as the Countess; the reliable Edward Van Sloan is back as Van Helsing (in a greatly reduced role), and Irving Pichel is fun in the Renfield role (more or less). He’s bit mouthy and arrogant for a mere mortal serving an undead countess, mocking her attempts to overcome her vampire’s curse.
Typically, the film never explains the obvious question: Why does she put up with him?