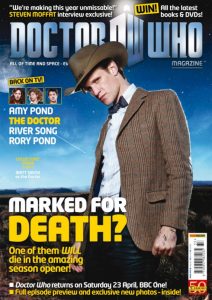 Doctor Who News reports that the BBC science fiction series probably will NOT have a full 13-episode run in 2012, as previously announced.

Apparently, BBC1 Controller Danny Cohen announced that DOCTOR WHO will return in “a curtailed form”.
At present, it appears that the 13 episodes and a Christmas special will be produced, but that the premeire will delayed until Fall, rather than Spring 2012, and only six or seven episodes will air.
Other shows of the 14-episode commitment will be shown in 2013, as part of the show’s 50th Aniversary.

DOCTOR WHO Writer/Producer Steven Moffat is reported to have said via Twitter: “Dr Who: misquotes and misunderstandings. But I’m not being bounced into announcing the cool stuff before we’re ready. Hush, and patience.”

Via Doctor Who News Page