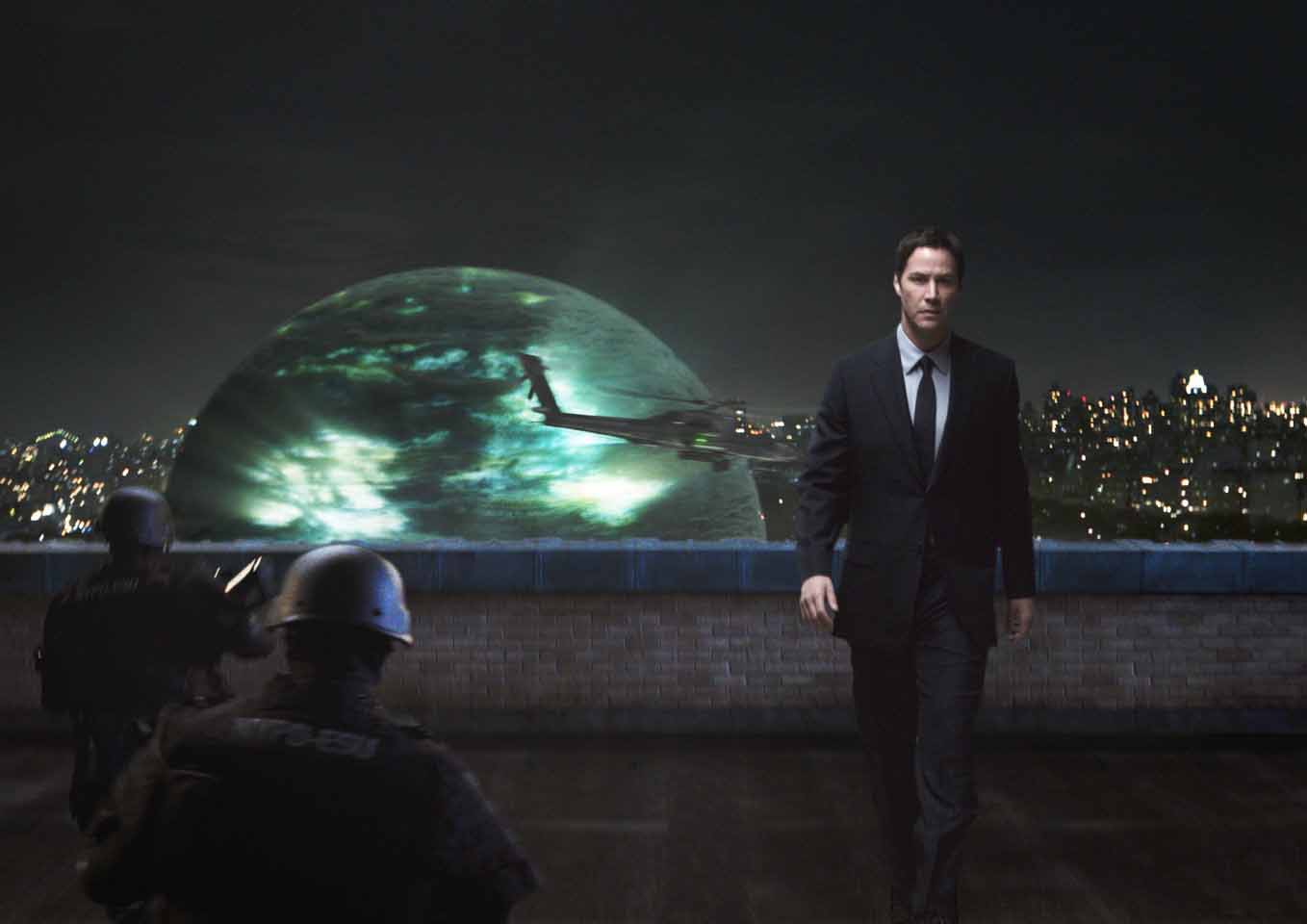 Remaking a classic film – especially a classic science fiction film like THE DAY THE EARTH STOOD STILL – is somewhat akin to a mad doctor’s experiments in gene-splicing: the filmmakers take DNA from the source and combining it with new material to create a hybrid – and hope the result is not a mis-shapen monstrosity that horrifies fans of the original and terrifies ticket-buyers looking for modern movie entertainment. For director Scott Derrickson and actors Keanu Reeves and Jennifer Connelly, this experiment was complicated by the unique status of their source.
The 1951 DAY THE EARTH STOOD STILL (along with Howard Hawks’ THE THING FROM ANOTHER WORLD) is one of the films that launched the lucrative sci-fiboom of the 1950s, an era when alien invaders, over-sized insects, radioactive dinosaurs, and malformed mutants replaced vampires, werewolves, zombies, and mummies as the monsters of choice; however, DAY stands apart from those films. Although clearly science fiction, the story’s roots lie more in message-movie melodramas; the original DAY is a serious effort about a serious subject. As director Robert Wise noted in the bonus features for a previous DVD release, the plot of the film is specifically designed to lead up to the scene wherein the alien Klatuu (Michael Rennie) openly states the film’s message to an assembly of scientists and by extension to the audience as well. That message  (about the need for international cooperation in a world where nuclear power provides the posibilty of worldwide destruction) resonated deeply in 1951, but it was very much of its era.


In the new millennium, which is haunted by fewer nightmares about Mutually Assured Destruction, International Terrorism and Global Warming are more relevant boogey-men. How, then, to reimagine the old storyline for modern audiences? At a recent press junket to promote the film’s release on Friday, December 12, director Derrickson said that he was proud of combing two elements in the film : “retro” and contemporary. He looked at the original, decided what were the essential elements that had to be retained and that fans would expect to see, and made sure they made it into the film, while omitting others that seemed irrelevent in the current social and political context. At the same time, he made sure that the new DAY supplied the sort of “tent-pole” filmmaking that would appeal to contemporary viewers looking for an exciting, action-packed science-fiction film.
One crucial element that made the 57-year jump from the 1951 version to the 2008 remake was the iconic line “Klatuu Barad Nikto” – the alien command that prevents the unstoppable robot Gort from unleashing destruction upon Earth. Actor Reeves stated that he was surprised not to find that line in the script when he first read it, but he and the director ensured that it made it into the final film (although it’s during a loud scene where some viewers may miss it). To enhance the impact, several techniques were used, including having Reeves memorize and pronounce the words backwards, which were then reversed to put them in the right order. The final mix overlays this double-reverse upon a take of Reeves reading the line in the usual order. (UPDATE: Although the line is in the film, it is buried in the mix beneath a ton of sound effects: to a casual viewer it may be apparent that the alien Klatuu is speaking in his native language to Gort; only fans will recognize, just barely, the specific words.)

Other elements had to updated. For exmaple, the leading lady in the 1951 film (played by Patricia O’Neal) was simply a stay-at-home mom – a traditional woman’s role in movies at the time. The 2008 version casts Jennifer Connelly as an astro-biologist, making her more integral to the story of an alien who comes to Earth seeking to deliver a message to humanity.
Reeves, meanwhile, had to deal with the problem of playing an alien in human form – a feat carried off to perfection by Michael Rennie in the original. Rennie’s performance, however, was a prime example of an actor perfectly cast: his natural voice and demeanor were perfectly suited to the roll, almost rendering acting ability beside the point. Reeves strategy, on the other hand, was to lay Klatuu as if he were an alien intelligence contained within a human body.  Reeves said he never wanted to play the characters as “neutral”; he always wanted something going on “behind the eyes,” as if Klatuu resided somewhere inside.

In the original, Klatuu was a rather blatant Christ figure (his assumed name on Earth is “Mr. Carpenter,” a reference to the historical Jesus being the son of a carpenter). In the remake, the character charts a course that takes him from more alien than human at the beginning to being more human than alien at the end. Reeves acknowledged that one might also read Biblical subtext into his vesion of Klatuu, who could be said to start off in the mold of the angry God of the Old Testament, threatening destruction (a la Noah’s flood), before transition to the kinder, gentler God of the New Testament, ready to forgive errant mankind if they repent.
One key piece of the original that did not make its way into the remake is Klattu’s climactic lecture to humanity, which blatantly spelled out the filmmakers’ message. It is a note that sounds a slightly odd tone to modern ears: intended to suggest that humanity should put its warlike ways behind in favor of cooperating not only with the nations of Earth but also with other civilizations from the stars, Klatuu’s speech has a threatening edge that sounds as if humanity would be surrendering its sovereignity to enforcer robots like Gort, one of which is apparently enough to destroy an entire planet.
As Keanu Reeves jokingly summed up the original’s moral: “It’s up to you, but also I’ve got a big stick.”
Director Derrickson explained the reason for dropping this lecturing approach in favor of letting the audiences figure it out for themselves: “I think that’s one of the things I liked that’s open-ended about it,” he said. “I definitely think that the original ending…I’ve never been able, personally, to unpack the end message that he gives, because of what Keanujust said. ‘Give peace a chance. It’s up to you. And if you don’t, we will kill you.’ Some people have accused the original of being fascist because of that ‘Peace through Strength’ message – a very Reagan-era approach to the Cold War: ‘I’ve got a bigger bomb than you so we’re all going to be nice.’ How that gels with the rest of the movie I have never been able to quite [figure], but that’s also one of the things that’s interesting about that.
“I do think that the didactic nature of the end, the directness of ‘here’s the message to the audience’ – modern audiences just won’t stand for that,” he continued. “I don’t like it as a modern movie-goer, being told ‘Here’s now what you’re supposed to think.’ I like very much the idea of being to put forth images and ideas and let audiences go away and make of it what they will. The intent of this was not to deliver a message. It was to deliver a picture of where we are. What I love about the ending is that Klatuu make this big sacrifice. He does say, ‘It’s going to come at a price to you and your way of life.’ The issues that the movie is talking about, all the crises that we’re in – the military crisis, the financial crisis, the environmental crisis – solving those problems will come at a price; they will demand sacrifice. I think the more interesting 21st century way to present those ideas is to do it visually, not to directly, to put it out there in a way that lets people talk about it.”