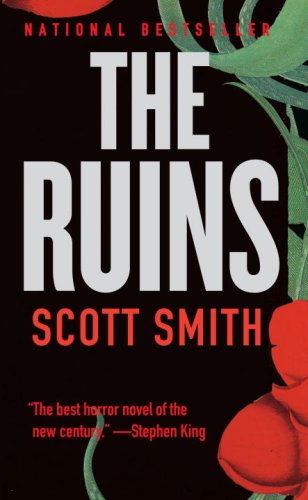 Apropos of this week’s release of THE RUINS, based on the novel by Scott Smith, Tom Burns over at Deadbolt.com offers up his list of “Five Other Horror Adaptations We Want to See.” Titles include Robert Kirkmans Walking Dead, Erik Larson’s Devil in the White City, Chuck Palahniuk’s Haunted, Stephen King’s The Girl Who Loved Tom Gordon, and James Ellroy’s Killer on the Road. The list pushes the definition of horror to some extent, especially with the Ellroy novel, which is really a piece of crime fiction told from the point of view of a serial killer. (It probably would make a good movie, but after shows like DEXTER and movies like MR. BROOKS, the essential conceit is not as innovative as it was when the novel was published decades ago.)
Anyway, Burns’ article got us to thinking: What are the books that we would like to see adapted into films? Read on to find out…

The title sounds familiar because it was used for two film adaptations of a story “Floating Water” that is contained within this anthology. But the book has several other horrifying tales and a nifty wrap-around story that ties them all together. The only problem with an adaptation is that much of the material has already been mined (besides “Floating Water,” there has been a MASTERS OF HORROR episode based on “Dream Cruise,” and “Solitary Isle” is set for adaptation as a feature by George Romero). Still, there are four good stories left, plus the prologue and epilogue – more than enough to make a solid anthology film along the lines of the old Amicus productions like ASYLUM and TALES FROM THE CRYPT.

THE WITCHING HOUR by Anne Rice

Lost in Development Hell for decades, Anne Rice’s greatest book is an epic story of witchcraft that delves deep into history while telling a contemporary love story. The richness and depth of the writing is what one would expect from the author, but she truly reaches her apex here, marshaling all her skills to tell a wonderful story that is completely involving and credible despite the incredible supernatural elements. Admittedly, the length represents a problem, but if Hollywood is willing to split The Hobbit and the latest Harry Potter adaptation into two films, why not The Witching Hour?

The fourth book in the Sonja Blue trilogy (apologies to Douglas Adams for stealing his joke about the Hitchhiker’s Guide to the Galaxy) is so overtly inspired by movies that it would almost inevitably make a good one itself. (The author’s note offers a tip of the hat to YOJIMBO, A FISTFUL OF DOLLARS, the original DAWN OF THE DEAD, and THE WARRIORS.) Starting with this story would present some difficulty in laying out the history of the lead character, a sort of Jekyll-and-Hyde vampire who hunts other blood-suckers. (Bitten when she was twenty, Sonja never died – thanks to modern medical science – so her human side lives on, battling for control with her vampire nature.) The story has Sonja inciting a turf war between rival vampire factions in an off-limits area of a major metropolitan city rules by creatures of the night. A film version of this book would make GRINDHOUSE look like a weak-kneed Disney flick.

Horror fans owe Blatty a debt they can never repay, for his creating of The Exorcist. His short novel Elsewhere began life as an attempt to write a script that would reunite him with director William Friedkin (who helmed the film version of THE EXORCIST). However, Blatty, who was a comic writer before turning to horror, found himself emphasizing the humorous byplay between the characters, resulting in what he termed “a horror movie written by Noel Coward.” The script was never filmed, but Blatty turned it into a novel, which appeared in the anthology 999. Despite the humor, the haunted house story (which includes a pair of exorcists) features its share of frights, and the length and pacing are perfect for film adaptation. Come on, Hollywood – if all those SCREAM movies could be both scary and funny – and make money – why not try the same thing with Elsewhere? Failing that, our second choice would be Blatty’s more specific spoof, Demons Five, Exorcists Nothing – which has no pretenses at all to genuine horror.

THE VAMPIRE OF THE CARPATHIA MOUNTAINS by Alexandre Dumas

This forgotten forerunner of Stoker’s Dracula(there are too many parallels to ignore) is a wonderfully romantic adventure-horror story about a Polish princess who takes refuge in a Carpathian castle to escape a Russian invasion. Her hosts include two brothers who vie for her affections: one dashing and charming, one ruthless and aggressive. Guess which one dies and becomes a vampire? Unlike the majority of vampire tales, the female victim and her heroic savior are not boring card-board cut-out characters but people you can relate to and sympathize with; women readers find themselves enjoying this story as much as any male horror hounds. The relatively short length is perfectly suitable for film adaptation, which could reach a much wider audience than the gruesome gorefests that pass for horror movies these days. Originally written in French, Dumas’ novel is available to English-language readers in the excellent anthology Vampires, Wine & Roses.