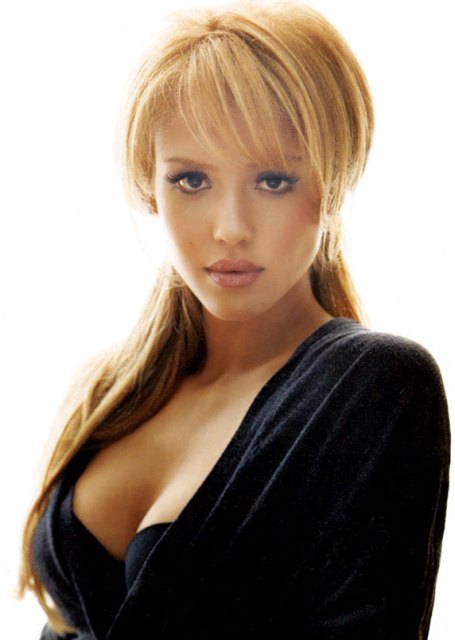 ALBA STUDIED HARD FOR HORROR FILM: PR-inside.com tells us that actress Jessica album took music lessons and studied blind people for her role as a blind violinist in THE EYE, which opens this Friday. Alba is building up quite the horror, fantasy, sci-fi resume, with roles in IDLE HANDS, SIN CITY, and FANTASTIC FOUR.
ROMANEK DROPS OUT OF “WOLF MAN”: Mark Romanek has decided that the path to directing THE WOLFMAN – a remake of the 1941 classic starring Lon Chaney – is just too thorny. The director left over “creative differences,” but Universal Studios insists that the project is in great shape. Benicio Del Toro is set for the lead, with Anthony Hopkins and Emily Blunt in supporting roles. The film was scheduled fo a February 18 start date; Universal will need to find a new director quickly.
JULIANNE MMORE SEEKS SHELTER: The actress has signed to star in a $25-million supernatural horror thriller from Nala Films (IN THE VALLEY OF ELAH). The Swedish duo of Mans Marlind and Bjorn Stein will direct SHELTER, from a script by Michael Cooney (IDENTITY). Production is scheduled for March in Pittsburgh.
E.T. GIVES BIRTH TO CJ7: Hong Kong actor and filmmaker Stephen Chow cites Steven Spielberg’s 1982 film about a cuddly alien as inspiration for CHANGJIAN QIHAO (CJ7), Chow’s new science fiction film about love between a father and son:

“I watched it many times,” said Chow of E.T. “I was amazed that science fiction could be filmed like that. I knew then I wanted to make a mvoie like that. Spielberg’s work inspired me to become a director.”