On Tuesday, August 28, BATTLESHIP arrives on home video in multiple formats: Blu-ray, DVD, and VOD. The Blu-ray Combo Pack includes a digital cop of the film, for use on mobile devices, along with UltraViolet, which allows you to collect your movies on the could, from which you can stream and download them to computers, tablets or smart phones. The Blu-ray disc also contains extensive bonus features:

You can see clips of the BATTLESHIP Blu-ray bonus features at Cinefantastique’s YouTube Channel:

THE HUNGER GAMES on Home Video

In a break with tradition, Lionsgate is release THE HUNGER GAMES in all home video formats (Blu-ray, DVD, VOD, and Digital Download) – not on a Tuesday but at a minute past midnight on the morning of Saturday, August 18. The strategy is designed to generate lines of eager fans at midnight retail events around the country. The film, which earned $400-million in the USA alone and nearly $650-million worldwide, will appear on store shelves as both a 2-disc DVD set and a 2-disc Blu-ray set, with over three hours of bonus features, including an eight-part documentary, THE WORLD IS WATCHING THE HUNGER GAMES. List price for the Blu-ray discs is $39.99, with the DVDs selling for $30.99.
NOTE: You can see excerpts from some of the bonus features in the video playlist embedded at the bottom of this post.
BLU-RAY & DVD SPECIAL FEATURES (subject to change):

Check out video clips from the home video release of THE HUNGER GAMES on DVD and Blu-ray:

Show of hands:
Watching the Olympic gymnastic events on NBC tonight, how many of you could not help thinking of this sequence from FINAL DESTINATION 5? 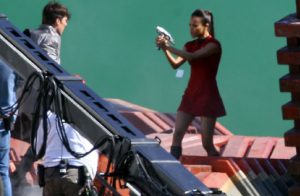 Will Dr. Helen Magnus’s (Amanda Tapping) plan be the salvation of Abnormal-kind…or its doom?
In this clip from “Sanctuary For None, Part 2”, Henry (Ryan Robbins)
and Nikola Tesla (Jonathon Young) learn that the SCIU turned one of the unsuspecting Tesla’s designs into a weapon to be used against Abnormals.

With no Season 5 pick-up announced as yet, this season finale could wind up being the series finale.
SANCTUARY airs Friday at 9:00 PM ET/PT on SyFy.

Here’s a Sneak Peek of TERRA NOVA’s “Now You See Me”
Taylor and Mira square-off in the jungle where he learns more about her plans and about his son. But then they both face a pre-historic enemy they must conquer together.

Meanwhile, the “Sixer” mole scrambles to cover its tracks as Terra Nova goes on lockdown and Jim closes in. Also, Zoe faces a difficult decision as the Ankylosaur she has been caring for grows rapidly.

In this week’s new episode Fugue, an abnormal attacks Will Zimmerman’s (Robin Dunne)’s girlfriend FBI agent Abby  Corrigan (Pascale Hutton).
When she wakes in the Sanctuary infirmary, Helen Magnus (Amanda Tapping) discovers that she’s being taken over by the abnormal, and learn that the only way to communicate with the creature is through singing.
Written and directed by Damian Kindler, Fugue airs Novemeber 25th.
SANCTUARY is on SyFy Fridays at 10:00 PM/9:00 Central.

Also: “Maddy starts interning for the colony’s greatest scientist (guest star Robert Coleby), and her life is put in danger when she discovers a terrible secret. Meanwhile, Josh (Landon Liboiron) makes a deal with the devil in order to solidify his plan to bring his girlfriend from the future to Terra Nova in the all-new “Proof” episode of TERRA NOVA premiering Monday, November  14 th(8:00-9:00 PM ET/PT) on FOX.

Will (Robin Dunne) and Henry (Ryan Robbins) try to track down a missing Abnormal after a shipping container mixup.
Meanwhile, Magnus’ (Amanda Tapping) mission to a remote African island to meet the Sanctuary’s new financial adviser sets off a tense hostage situation.