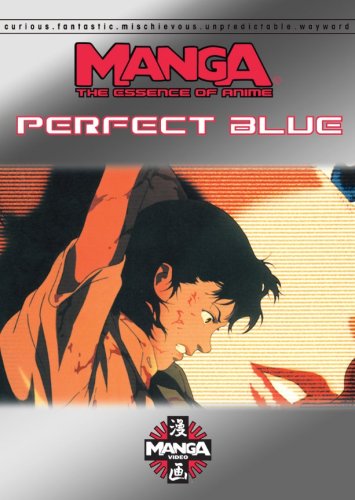 When reviewing disreputable genres, it is not uncommon to extoll the virtues of little known films in the hope of starting a buzz that will attract attention to films that might otherwise be obscured by more high-profile projects. To some extent, this happened with PERFECT BLUE, the anime psycho-thriller that received an art house theatrical release in 1999. In a year that saw some excellent animated films – ranging from PRINCESS MONONOKE to SOUTH PARK to TOY STORY 2 – PERFECT BLUE received some of the best critical notices; it turned up on a few year-end “best of” lists, and one or two critics even ranked it higher than Hayao Miyazaki’s PRINCESS MONONOKE. Is this the Little Movie That Could? Or is it another instance of well-meaning critics hyping a small movie because it is small? The answer is: a little of both, actually. PERFECT BLUE does not completely deserve the accolades it received, but its virtues are more than apparent enough to explain why critics would want to give it a boost: general audiences in the U.S. are not eager to give anime a chance; and whatever its flaws, PERFECT BLUE offers much that is intriguing.

The film has style and then some—maybe too much, in fact, but the visual interest always remains high, and the storyline is intriguing. Under pressure from her managers, Mima, a semi-successful pop singing idol, leaves her band to pursue a career as an actress in a psycho-thriller TV show called Double Blind (which seems to be a rip-off of Silence of the Lambs). The writer of the show can’t figure out what to do with her character until he comes up with a brutal rape scene that has less to do with drama that with destroying her innocent image (tellingly, she wears the same costume during the scene that she used to wear on stage). Unfortunately for Mima, an irate fan is outraged by this new tarnished image, and sets out to save the “real” Mima from this tarnished “imposter.”


The film does a great job of establishing identification with Mima, and the suspense sequences are handled with aplomb. The violence packs a punch, but so do the quieter moments, as when Mima logs onto a fan website devoted to her, and realizes that whoever is running it knows far more about her private life than anyone possibly could, without spying on her. There are also numerous satirical jabs at the entertainment business and at the world of fandom. (Besides the mad stalker, there is also a contingent of cynics, who comment periodically on the Mima phenomenon—sort of the equivalent of “Trekkers” who look down on “Trekkies.”).
What damages this otherwise excellent effort is two things: one plot oriented, the other stylistic. The script resorts to the kind of lamebrain thinking that affects many thrillers, in which the characters do stupid things in order to keep themselves vulnerable. In this case, the story nearly destroys audience credibility early on, when a fan letter addressed to Mima explodes in her manager’s hands, badly lacerating them—and then no one calls the police! Even if we assume that Mima’s managers don’t care about her personally, they should care about the welfare of their meal ticket.
The film’s second fault lies with a certain stylistic excess in terms of playing self-reflexive games with the audience. In order to portray Mima’s mental deterioration under the duress of being stalked, the events of her “real” life story begin to mimic the events of her “reel” story on the TV show. This would no be confusing in and of itself, but the film takes another step, during a prolonged sequence midway through, wherein Mima repeatedly goes back and forth between “real” and “reel” life—and then wakes up as if from a dream, leaving us to wonder whether any of what we have seen actually happened. This all leads to a revelation at the end that leaves at least one question wide open, and also relies on a rather high degree of coincidence. (The killer’s psychosis rather too neatly dovetails with Mima’s delusions, in order to continue the visual imagery of Mima struggling with her phantom alter ego long past the point when she is actually struggling with a flesh-and-blood opponent.)
These stylistic quirks, however, are part of what makes the film interesting, and if occasionally they lead to artistic dead-ends, more often they bring the film to life. The milieu is effectively displayed, and the struggle of Mima to make the transition from a kind of semi-stardom to an actual acting career is involving. Audience identification with the character is effectively achieved, making her more than just an objectified victim. The televised rape scene is particularly interesting in this respect, with the cameras stopping at a crucial moment, necessitating that the cast hold their awkward positions. The actor’s whispered “I’m so sorry” to Mima somehow rings true, making the scene more believable than is safe for comfortable viewing. In fact, the whole sequence seems like a commentary on anime’s predilection for stripping its heroines down and subjecting them to all sorts of graphic sexual violence. (It’s just a little too bad that, once filming resumes, the scene goes on way past making it dramatic point and ends up becoming the very thing it seeks to criticize.)

The great thing about Manga Video’s DVD (originally released on May 2, 2000) is that it allows you to go back and appreciate what you liked about the film, while what you disliked gradually fades in significance. PERFECT BLUE rewards on subsequent viewings, and anime fans (not to mention fans of thrillers in general) should not be deterred by critical comments regarding flaws that are outweighed by virtues. The disc presents the film with good Dolby stereo sound (also in Dolby 5.1, if you have the equipment to access it) and a clear, widescreen print (of the unrated director`s cut) that captures the visual beauty of the backgrounds and leaves de rigueur sex and violence intact. (Despite Roger Corman`s quote, much used in the press materials, that PERFECT BLUE resembles a combo of Walt Disney and Alfred Hitchcock, the real stylistic reference point seems to be Dario Argento; the film even recreates the broken-shard-of-glass-in-the windowsill-impaled-through-the-abdomen, as seen in Argento`s Deep Red.)
Even better, for the purists among us, the disc contains both the English-dubbing and the original Japanese-language soundtrack, with the option for English subtitles. The print itself is from the American theatrical release of the dubbed version, so the credits are in English and include the names of the American voice actors, even when you’re listening to the Japanese dialogue—a surreal experience, to be sure.
The disc also includes numerous extras. In a real stroke of genius, the supplements are gathered in a menu area called “Mima’s Room,” designed to look like the fan website seen in the film itself, run by the stalked known only as “Mr. Me-Mania.” A behind-the-scenes video shows three Japanese singers recording the vocal tracks for the band’s signature song. If you’ve watched the Japanese version and found the subtitles insufficient for following the lyrics, you can access the English-language version from the extras menu without having to sit through the film again. (By the time you’re through, you’ll be hearing the song in your sleep, believe me!) There are interviews with the American voice actors, who mostly answer abstract questions on how they identify with their characters, what they think of pop stardom, and things like that. Most amusing is the voice of Mr. Me-Mania, who admits he has no idea how his character hooked up with the conspirator who supplied him with all the inside info he put up on his site.
There are also interviews with the Japanese voice actress, who talks a bit more specifically about getting the role of Mima and working with the director, Satoshi Kon. Kon himself answers several questions about the making of the film, but finds it hard to explain specifics when asked to analyze the meaning. He does insist that some confusion on the part of the audience was inherent in the storytelling, but adds that he did not go out of the way to emphasize that.
Finally, there is a photo gallery of images from the film, set to music; lists of other Manga DVD and video releases; and a page of web links you can access if you have a DVD-Rom drive on your computer. Beware, however, if you’re looking for the film’s trailer: it’s not identified in “Mima’s Room”; you access it by clicking on the apparent web link for the Perfect Blue site while the disc is in your DVD player instead of in a DVD-Rom drive. Other web links will take you to trailer-type collages of scenes from other Manga releases. (Presumably, this was done so that you could still get something by clicking on these points even if you don’t have a computer with DVD-Rom capabilities.)
Overall, Perfect Blueis an intriguing film that has a powerful visceral impact while also inviting a certain amount of thought on the part of viewers. It warrants the kind of special treatment given by Manga on this DVD, and the supplemental materials do enhance the viewing experience. If the film itself is not without its flaws, the strengths are more memorable, and this disc brings them to the forefront.
PERFECT BLUE (Manga Entertainment, 1998). Directed by Satoshi Kon. Screenplay by Sadayuki Murai, from the novel by Yoshikazu Takeuchi. Japanese Voices: Junko Iwao, Rica Matsumoto, Shinpachi Tsuiji, Masaaki Okura. English Voices: Bridget Hoffman, Bob Marx, Wendee Lee, Barry Stigler.
[NOTE: The DVD portion of this review is based on the original 2000 DVD from Manga Video (available below). The film was subsequently released on DVD as part of the “Essence of Anime” series, pictured at top.]