Laserblast: from the pit of horror to the depths of space 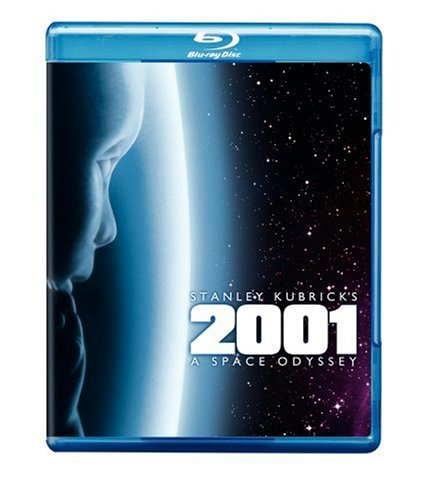 This week features an incredibly diverse set of titles released on disc. The deluge of product has much to do with the emerging popularity of the relatively recent HD DVD and Blu-ray formats, which has resulted in numerous previously available classics and cult films being released yet again. Newcomer MEET THE ROBINSONS arrives on DVD and Blu-ray. Box office dud HOSTEL – PART II emerges unrated on DVD; there is also a Blu-ray disc and a UMD for PSP. Stanley Kubrick’s body of work sees at least its third release in a box set, which includes sci-fi, fantasy, and horror efforts 2001: A SPACE ODYSSES, A CLOCKWORK ORANGE, and THE SHINING; all are also available as individual discs, in each of the major formats (DVD, HD DVD, and Blu-ray). MR BROOKS, the nifty serial-killer thriller, makes its debut on DVD and Blu-ray. A two-disc edition of the fantasy odyssey O LUCKY MAN is now available. The Alistair Sim version of A CHRISTMAS CAROL is presented in an Ultimate Collector’s Edition, featuring lots of extras, plus the original black-and-white version and a colorized version. FIDO, the satirical zombie comedy, makes its debut on DVD. There is a Bava DVD Box Set, Vol 2, which includes such cult gems as BLACK SUNDAY and BLACK SABBAT (which are also available separately). In anticipation of SAW IV, SAW III arrives in a two-disc special edition, featuring an unrated director’s cut; there is also a SAW trilogy box set. The ’70s cult French animated film FANTASTIC PLANET gets the DVD treatment. HELLRAISER unlocks a 20th Anniversary Edition DVD. CUTTING CLASS – a long-forgotten ’80s slasher effort starring Brad Pitt – is dug up out of the mothballs and for presentation on DVD. And box set of the seventh season of TALES FROM THE CRYPT arrives, which prompts an even bigger box set featuring seasons 1 through 7.
Find all these and more below the fold.
END_OF_DOCUMENT_TOKEN_TO_BE_REPLACED

This is a big week for home video releases, but in spite of the Halloween season, you will find high-quality horror in short supply. Instead, the e-ticket item is the science-fiction blockbuster TRANSFORMERS, which arrives on DVD in a standard edition, a two-disc special edition, and on HD DVD. The extensive bonus features of the special edition include an audio commentary by Michael Bay (in which he discusses working with Steven Spielberg and talks about his ideas for TRANSFORMERS 2); storyboards; and three featurettes: “Our World” (interviews with Bay and Spielberg, illustrated with footage from the set), “Their War” (a look at the Decptions and Autobots), and “More Than Meets the Eye” (designing and staging the Skorponok scene). END_OF_DOCUMENT_TOKEN_TO_BE_REPLACED

There’s a Biblical Noah’s flood of DVDs washing ashore this week, led by EVAN ALMIGHTY. Despite less than stellar reviews, the follow-up to BRUCE ALMIGHTY turned a pretty penny at the box office, even without Jim Carrey back in a starring role. The film arrives on home video shelves in a variety of versions: Widescreen DVD (pictured), Full Screen DVD, and HD DVD. Extras include some deleted scenes and film flubs. There is a feature about the animals seen in the film and on the construction of the ark, plus a “match the animal pairs” game.
Read about the rest of this week’s DVD releases below the fold.
END_OF_DOCUMENT_TOKEN_TO_BE_REPLACED 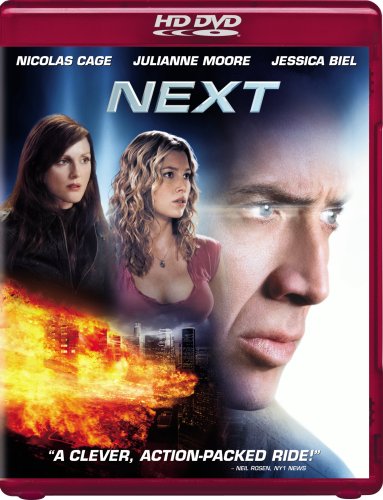 It’s a busy week for DVD fans, with numerous new titles making their debut and a ton of oldies resurrected and/or re-issued. We start off with NEXT, the high-profile psychic-thriller starring Nicholas Cage, which came out earlier this year. Despite the high-power star, this film squandered its intriguing premise on a standard Hollywood action scenario. Cage plays a Vegas lounge entertainer who really can see the future. The government wants him to help stop terrorists from detonating a nuclear bomb, but he has more important things to do, like trying to find the girl of his dreams (or premonitions, if you will). There are some nice scenes of Cage forseeing possible alternate futures before deciding what course of action to take, but the whole thing is ultimately undermined by a last-minute fake-out ending. The film is now available on DVD and HD DVD. Bonus features inclue a trailer, an 18-minute making-of documentary, a seven-minute featurette discussing the visual effects, an interview with the filmmakers discussing the romantic elements of the film, and a two-minute interview with Jessica Biel speculating on what she would do if she could see into the future. There is no audio commentary.
END_OF_DOCUMENT_TOKEN_TO_BE_REPLACED 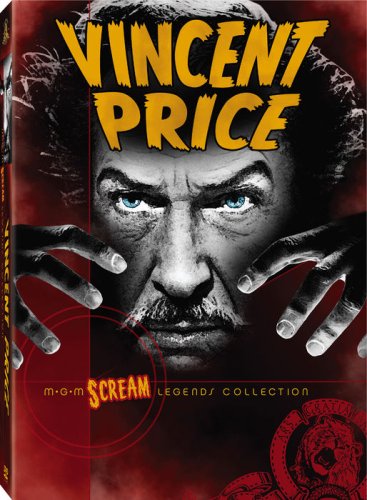 Today is a great day for classic horror film collectors in general and Vincent Price fans in particular. Although thee only new horror title arriving on home video is 2006’s negligible SNOOP DOGG’S HOOD OF HORROR, there are dozens of classic films hitting shelves in new DVD releases: an unrated director’s cut of Stuart Gordon’s FROM BEYOND, a Collector’s Edition of Dan O’Bannon’s RETURN OF THE LIVING DEAD, a double bill disc of two Amicus films from the ’70s based on old horror comics, TALES FROM THE CRYPT and THE VAULT OF HORROR. But the true highlight of this week’s DVD releases is two box sets featuring the late “Merchant of Menace,” Vincent Price. The first, “The Fly Collection,” includes THE FLY (1958), RETURN OF THE FLY (1959), and CURSE OF THE FLY (1965). Price only appears in the first two FLY movies, but they helped cement his stature as a horror star, after decades of being a character actor and villain in mainstream melodramas and mysteries. The second, “Vincent Price: MGM Scream Legends Collection,” includes THE ABOMINABLE DR. PHIBES, TALES OF TERROR, THEATRE OF BLOOD, MADHOUSE, WITCHFINDER GENERAL, DR. PHIBES RISES AGAIN, and TWICE TOLD TALES.
The highlight here is WITCHFINDER (a.k.a. THE CONQUEROR WORM), which has never before been released on disc in the U.S. This DVD (which is available separately) is the first opportunity for U.S. fans to see the film in its original form, under its original title. (Read more about the film’s long and winding road here. With the exception of CURSE OF THE FLY, all the other titles have been previous available on disc, but this is a great opportunity to acquire them in collectible editions. The “Fly Collection” contains bonus features that were not available on the previously released, bare-bones DVD double bill of THE FLY and RETURN OF THE FLY. The “Scream Legends Collection” contains a fifth bonus disc, with a documentary and two featurettes about Price and his career.
In honor of these DVD releases, we have loaded up with retrospectives on the films. Some of them we are posting for the first time; others have already disappeared into the archives, but you can find them by clicking here for an in-depth article about THE FLY and here for an article about TALES OF TERROR.
The rest of this week’s DVD releases can be found below the fold.
END_OF_DOCUMENT_TOKEN_TO_BE_REPLACED

This is one of those weeks – when there are dozens of sci-fi, horror, and fantasy titles listed among the week’s DVD releases, but most if not all of them have been previously released, and in many cases the only new thing about the resurrected version is the cover art. Consequently, keeping in mind that the hard-gore genre fan already has these titles in his/her collection, we give you this rundown of what’s for sale.
RESIDENT EVIL: EXTINCTION opens in a few weeks, so of course that means it is time to resurrect the previous films in the series, RESIDENT EVIL and RESIDENT EVIL: APOCALYPSE. Now you can get both films in one two-disc DVD package, which will fit much more snugly onto your shelf, somewhere in between RE-ANIMATOR and THE RESURRECTED. END_OF_DOCUMENT_TOKEN_TO_BE_REPLACED

Not much new and exciting in terms of fantasy, horror, and science-fiction films on home video this week, so fans must content themselves with some classics being released in new and improved form.

ROBOCOP (1987) was one of the best science-fiction films to emerge during the ’80s – a combination of a great concept with great production values, blending comic book-style action with genuine pathos for the titular character (a cop killed and resurrected as a cyborg). The film has been released on home video in various formats, including an unrated edition on laserdisc that briefly resurfaced on stand-alone DVD before being replaced by a box set containing the two sequels. If you have avoided the set containing the disappointing ROBOCOP II and ROBOCOP III, now is your chance to obtain the original in the 20th Anniversary Collector’s Edition. The two-disc set contains the theatrical cut on Disc 1 and the 103-minute extended cut on Disc 2. Bonus features include audio commentary, deleted scenes, theatrical trailers, and featurettes.
END_OF_DOCUMENT_TOKEN_TO_BE_REPLACED

Unlike last week, which was thin on science-fiction, fantasy, and horror film DVD releases, today sees a veritable deluge. Only a handful are new titles; most are anniversary versions, collector’s editions, and/or box sets repackaging two or three previously available titles.
David Lynch’s INLAND EMPIRE is one of the most confounding films of the writer-director’s career, and that is truly saying something. The basic premise sounds like a fairly straight-forward mystery-horror film: Laura Dern plays an actress hired to play a role in the movie (directed by Jeremy Irons). It turns out that the project is a remake of a previous film that was never completed, due to mysterious mishaps. Is the film cursed? Will lightening strike twice? Are Dern and her fellow film-makers doomed to recreate the previous disaster? END_OF_DOCUMENT_TOKEN_TO_BE_REPLACED

This is a busy week for home video, with lots of titles appearing on disc. Of course, quantity does not always equate with quality, but you’re bound to find something of interest among the DVDs below. There are only a couple of new titles, but several classics and/or cult films are showing up, repackaged in various ways to make them appealing to potential buyers.

First up is DISTURBIA, a somewhat mechanical retooling of REAR WINDOW, which managed to compensate for its derivative status with some decent characterization and performances. The film is available on DVD in a Widescreen Edition  (pictured above) and a Full Screen Edition, plus Blu-ray and HD DVD. Extras include: END_OF_DOCUMENT_TOKEN_TO_BE_REPLACED