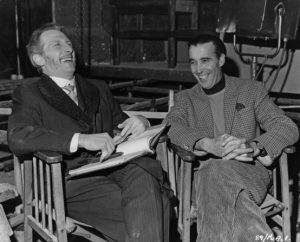 The June 2002 double issue (Volume 34, Numbers 3-4)featured a cover story on SPIDER-MAN; extensive coverage of the third season of FARSCAPE; plus articles on LILO & STITCH, STAR WARS, MEN IN BLACK 2, DINOTOPIA, MINORITY REPORT, SPIRIT, JASON X; and FRAILTY.
You can purchase a copy here.
You can find articles from this issue in the Archives for June 2002. Highlights include:

The October 1999 issue (Volume 31, Number 8 ) featured a cover story on the X-FILES television show, plus preview articles on DUDLEY DO-RIGHT, ANGEL, LOST SOULS, THE ASTRONAUT’S WIFE, and UNIVERSAL SOLDIER: THE RETURN. Articles from this issue can be accessed under the Archives listing for October 1999.
The contents for this issue are as follows:
3 Sense of Wonder by Frederick S. Clarke
4 Release Schedule
5 Star Wars: The Phantom Menace– analysis by Thomas Doherty END_OF_DOCUMENT_TOKEN_TO_BE_REPLACED

The April 1997 issue of Cinefantastique (Volume 28, Number 10) features a cover story on the making of Stuart Gordon’s SPACE TRUCKERS. There is extensive coverage of Davdi Lynch’s LOST HIGHWAY. The issue includes a look back at the best cinefantastique from 1996, along with horror and sci-fi Oscar picks. Other articles cover David Cronenberg’s CRASH; ANACONDA, MEN IN BLACK.
Contents for the issue are:

The August 1996 issue (Volume 28, Number 10) features a cover story on the making gof THE CROW: CITY OF ANGELS, including interviews with the actors, director, screenwriter, and special effects team, plus a look back at the J. O’Barr graphic novel that inspired the film franchise. Other feature articles include THE FRIGHTENERS (from Peter Jackson), ESCAPE FROM L.A. (from John Carpenter), and the anime film GHOST IN THE SHELL.
The contents for this issue are as follows:
3 Cinemagination by Steve Biodrowski
4 Release Schedule: The Month’s Genre Films END_OF_DOCUMENT_TOKEN_TO_BE_REPLACED

The Auguest 1993 issue of Cinefantastique magazine (Volume 24, Number 2) featured a cover story on JURASSIC PARK, including interviews with Michael Crichton, Stan Winston, and many others. The dino-packed issue also featured articles on Roger Corman’s CARNOSAUR, plus PREHYSTERIA and the DINOSAURS ATTACK bubblegum cards. Other articles included an alternate cover story on the Making of ROBOCOP 3, previews of Stuart Gordon’s FORTRESS and THE GHOST IN THE MACHINE, and articles on WITCHBOARD 2 and FRIDAY THE 13TH PAR IX: JASON GOES TO HELL.
3 Sense of Wonder
4 FORTRESS
6 GHOST IN THE MACHINE
8 JURASSIC PARK

The January 1989 double issue of Cinefantastique (Volume 19, Numbers 1 & 2) magazine features an extensive cover story on the career of “Vincent Price: Horror’s Crown Prince.” This survey of Price’s fifty years in Hollywood and his legacy in the genre was written by Steve Biodrowski with David Del Valle and Lawrence French, with interviews, sidebars, and other contributions from Christopher Lee, Alice Cooper, Hazel Court, Robert Quary, Gordon Hessler, Roger Corman, Douglas Hickox, and Bill Kelly. The issue also includes feature articles on ELVIRA – MISTRESS OF THE DARK, David Cronenberg’s DEAD RINGERS, the making of Stuart Gordon’s ROBOJOX and Neil Jordan’s HIGH SPRITIS, and the animation of WHO FRAMED ROGER RABBIT; previews of John Carpenter’s THEY LIVE, Ken Russell’s LAIR OF THE WHITE WORM, and Gene Roddenberry’s STAR TREK: THE NEXT GENERATION; and a retrospective on the 1958 version of THE BLOB. You can access articles from this issue under the Archives listing for January 1989. END_OF_DOCUMENT_TOKEN_TO_BE_REPLACED