Skip to content
EmpireOnline is featuring new pictures and comments from the makers of CAPTAIN AMERICA: THE FIRST AVENGER.

According to Marvel head honcho Kevin Feige:
“Scripts had been developed that took place half in World War Two, half in the modern day and none of those scripts were particularly successful because the costume ended up overshadowing the man. So we finally said, ‘If we could make a Captain America movie any way we wanted to make it, how would we make it?’  Well, we’d set the entire movie in the past, in that period, with all of the Marvel trimmings. And so we made the fun, kick-ass Captain America movie we wanted to.”
Director Joe Johnston said: “I’ve always loved Raiders (of the Lost Ark) and the tone that it had… It was period but didn’t feel like it was made in the period. It felt like a modern-day film about the period, which is what we’re doing on CAPTAIN AMERICA. It will not feel like a war movie. It’s funny where it needs to be and emotional where it needs to be and serious and full of action.” 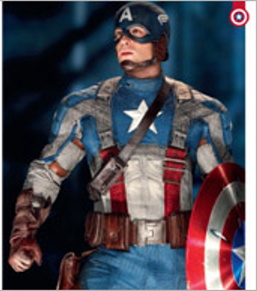 Star Chris Evans is dquote as saying “I think he’s the ideal human… Not just American. It’s what being a good person is. Steve’s managed to overcome all the shortcomings he’s had in life and he does what’s good and what he believes is right.”

Regarding Kevin Feige’s comments about Captain America’s costume, I really have to say: “WTF?” Are you sure you get the basic concepts of  costumed superheroes? NEVER be ashamed, worried, or self-concious about their iconic, established and time-honored appearance. Because if you are ambivalent, the attitude will likely be reflected in the film, to its detriment.
Worry about the plot, acting and truthfulness to the published and popular source material, and not so much the material of the costume.
Sure, make the costume the best that you can, avoid shiny spandex if possible, use a darker or muted color pallete if you must, but don’t get hung up on the “will the costume be acceptable to a non-comic book audience?” question. In my view,  the believability of the characters’ actions, motivations and story is what’s important,  even to the the casual movie-goer.
So much of what is coming out of the makers of this Captain America film seems so tone-deaf towards the character and his long-time appeal, and full of a desire to distance themselves from the comic book — particularly the original, patriotic aspects of this intensely patriotic character, created intentionally to present and espouse all the best ideals of the country.
Hopefully, all this apparent avoidance and equivocation we’re hearing from some of them regarding the source material and the character will not  undermine  the finished film.
(Stepping off soap-box, now.)
The full story will be featured in the March issue of Empire Magazine, which should hit stands in the UK Feb. 3rd, and probably by week’s end in the US.
CAPTAIN AMERICA: THE FIRST AVENGER is due in theaters July 22nd, in 2-D and post-converted 3-D.