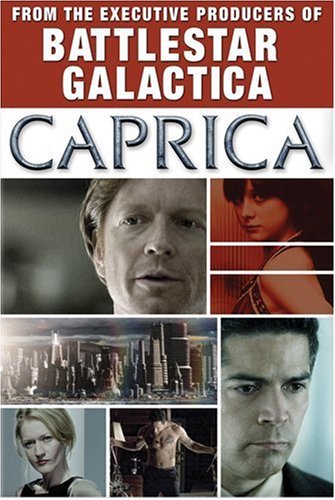 The show has a cleaner look than the deliberately grainy Galactica Obviously, digital trickery is responsible for much of Caprica City’s ever present skyline, but smaller details represent an interesting mix of practical future-tech and retro ’50s era fashions. We weren’t thrilled to see a return of the religious overtones that became the guiding light of all Cylon storylines during Galactica’s final two seasons, but producers Moore and David Eick have done a truly amazing job turning an iffy concept into a riveting launching point, so we figure they’ve earned the benefit of the doubt.

Universal’s unrated DVD hits shelves on the 21st with a sparkling anamorphic 1.78×1 transfer that highlights the Caprica‘s bright, clean aesthetic – only with a fiber optic cable connection will the show look better when broadcast on the Sci-Fi Channel, a notorious repository for highly compressed programming on our dreaded Cablevision system.
Extras include a commentary with director Jeffrey Reiner and producers Moore and Eick, along with several deleted scenes and video blogs, similar to what we saw supplied for Galactica season sets. We found ourselves disappointed to learn that the series proper wasn’t going to begin until 2010, but it’s probably a good idea to let Battlestar Galactica pass further into memory in order to give its prequel the breathing room that it deserves. Recommended.