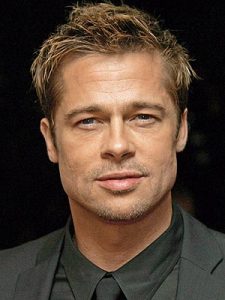 When the zombie apocalypse happens, isn’t it comforting to know that at least SOME pretty people will survive? Hollywood hopes you think so as it was announced that Brad Pitt would be starring in the upcoming zombie war retrospective WORLD WAR Z. Based on the book of the same name by Max Brooks, WORLD WAR Z tells the unique story of the human fight for survival against the infected – from initial outbreak to humanity’s ultimate victory – by way of oral interviews.
J. Michael Straczynski will be adapting the book into a screenplay and, while nothing is known for sure, rumor has it that he has added a journalist character to the storyline – potentially the Brad Pitt role – that will facilitate the book’s original interview format.
The film was optioned by Pitt’s Plan B productions 3 years ago and has been in development ever since. Plan B has also picked up the rights to Max Brooks’ other books THE ZOMBIE SURVIVAL GUIDE and THE ZOMBIE SURVIVAL GUIDE: RECORDED ATTACKS. Whether these will be incorporated into the WWZ film or will be stand-alones has yet to be seen.