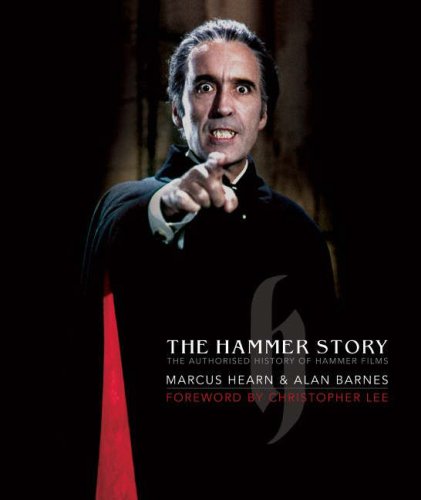 Over half a century ago, Hammer Films, a small British Company, reshaped the face of horror, abandoning the old cobwebbed, black-and-white atmospherics of Universal’s 1930s classics (DRACULA, FRANKENSTEIN, etc) in favor of a bold new approach, loaded with bright Technicolor, sumptuous sets, heaving bosoms, and laced with blood. Films like CURSE OF FRANKENSTEIN (1957) and HORROR OF DRACULA (1958) redefined the genre, and the company continued to churn out innovative and interesting horror films until the mid-1970s, when the changing shape of the film industry (plus competition from big-budget films like THE EXORCIST) closed the lid on the coffin.
Much has been written about the “Studio That Dripped Blood,” but even fans who have read it all before will want to pick up The Hammer Storyby Marcus Hearn and Alan Barnes. It is a beautiful, glossy coffee table book, loaded with lovely stills, including many behind-the-scenes shots. The text tries to provide a definitive history, tracing the company from its early inauspicious debut in the 1930s through its heady heydays in the ’50s and ’60s.
Divided into sections headed “Reanimation 1955-1964,” “Fresh Blood 1965-1969,” “Setting Son 1970-1975,” and “Life After Death 1975 Onwards,” the book features chapters summing up the trends of different eras and focusing on the casts and crews that made the films great, offering a virtual film-by-film rundown of the studio’s horror output. Not only are the favorite classics venerated; individual chapters sum up the studios other output, such as war films and comedies. Much of it makes fascinating reading, although at times minutia of financial dealings can be a trifle exhausting, and the trajectory of the company a bit depressing (it is sad to read of Hammer’s slow decline in the ’70s, struggling to stay afloat after major Hollywood distributors stopped offering financing deals).
If there is a problem, it is that, with so much to cover, inevitably certain topics are slighted: most of the films get two pages; stars Peter Cushing and Christopher Lee receive a page each; most of the directors and writers are squeezed into sidebars. Also, much of the information in the book has been previously available in other sources, so hardcore fans may not learn much new. However, it is useful to have the information collated and presented in this chronological format. For many of us critics, who tend to assess Hammer’s output in categories (Frankenstein titles directed by Terence Fisher, for example), it is useful to be reminded that these films were all part of a slate being churned out on a regular shceudle for reasons of budget and box office, not because Fisher had another artistic statement to make on the subject of the Baron.
Originally published in 1997, The Hammer Story is now available in a 2007 edition; little has happened in the intervening ten years to require any updating of the text. Ironically, shortly after publication of the new edition, news broke that a new production was filming under the Hammer banner.
One other note: despite the overall high quality, the book contains a rather obvious error on page four, wherein a photograph of Peter Cushing from CURSE OF FRANKENSTEIN is captioned as FRANEKNSTEIN AND THE MONSTER FROM HELL (1972).
THE HAMMER STORY: The Authorized History of Hammer Films, by Marcus Hearn & Alan Barnes, Foreward by Christopher Lee.

One Reply to “The Hammer Story – Book Review”