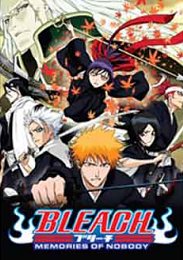 Adult Swim, Anime, BLEACH, BLEACH: MEMORIES OF NO ONE, SUPERNATURAL