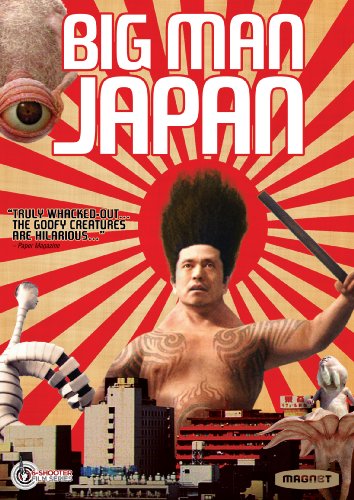 BIG MAN JAPAN is built around a funny concept, vaguely akin to HANCOCK: its title character is a superhero who is a bit of a loser. Of course, being a Japanese superhero, he periodically grows to enormous size (courtesy of electricity applied to his nipples) and confronts monsters attacking urban areas around the country, often with hilariously deadpan results. Unfortunately, the concept is not enough to sustain the entire film; in fact, the gambit ultimately backfires, the humor at times turning to tedium.
Filmed in a documentary style, BIG MAN JAPAN alternates between computer-generated monster battles and long interview segments in which Daisato (director Hitoshi Matsumoto) comes across as just some guy doing a job, with nothing particularly interesting to say, barely able to formulate answers to the questions he is being asked. This leads to some interminably long stretches of screen-time while viewers eagerly await the next monster to arrive, each one preceded by a narration that matter-of-factly expostulates upon the new foe’s characteristics (“Such are the features of the Strangling Monster).
There is much to enjoy, espeically for fans of Japanese giant monster movies and superhero television shows of an earlier era. BIG MAN JAPAN makes it clear that Daisato is a remnant of a once-proud tradition that has fallen on hard times; the public isn’t proud of him, and his televised exploits are relegated to late-night hours when no one is viewing (until he gets badly beaten – and the ratings jump).
There is also a weird and pretty much inexplicable switcheroo near the conclusion. A title card tells us that we are going to a live broadcast of Big Man Japan’s latest battle, and suddenly the CGI is gone, replaced by live-action miniatures and suit-mation, with deliberately bad fight choreography (described repeatedly by one of the partipants as “crappy”). It’s a fun nod to ULTRAMAN and similar shows (the obvious antecedents for BIG MAN JAPAN), but the sudden stylistic switch comes so far out of left field that it leaves viewers baffled.
Those seeking understanding of the processes that went into this decision are not likely to find it on Magnet Releasing’s DVD. The widescreen transfer and the Japanese audio track (in Dolby 5.1 and Dolby 2.0) are good, and there are options for English or Spanish subtitles, but the bonus features are, frankly, boring and uninformative, consisting of Deleted Scenes and “Making of Big Man Japan.”
Although the title “Making of Big Man Japan” suggests a documentary, what we get is more like a series of B-roll vignettes, spliced together, with the camera sitting in on development meetings or watching the cast and crew take the finished film to Cannes. You can watch the making-of with an additional audio commentary, but this provides little information. For example, BIG MAN JAPAN’s last-minute switch from CGI to live-action is mentioned but not really discussed (we are told there were some discussions or arguments about the decision, but not the substance of those arguments).
The Deleted Scenes are somewhat misnamed; a more appropriate moniker would be “Extended Scenes.” At over an hour in length, they are enough to try the patience of all but the most dedicated kaiju fan, but combined with the “Making of Big Man Japan,” they are informative on one level: we learn that first-time director Hitoshi Matsumoto seemed unwilling to yell “Cut,” resulting in takes that run for twenty minutes of aimless question-and-answer dialogue. Two or three minutes of this stuff was more than enough in the final cut of the film; viewed at full length, the scenes seem merely interminable.
However, there is one brief but memorable shot of an actress in a bizarre prosthetic, suggesting that her breasts have been electrocuted with jumper cables from a car battery. How this would have fit into the film, we cannot say, except to presume she was trying to become Big Woman Japan.
[serialposts]