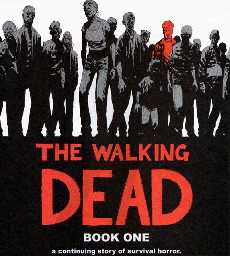 Quint over at Ain’t It Cool News has an interesting Q&A with Robert Kirkman about THE WALKING DEAD, the Zombie TV series based on the Image comic he writes and created in 2003 (with artist Tony Moore).
Asked about what the series would be able to depict on the AMC cable version, Kirkman gave this encouraging answer.

“… There are some language restrictions. You’re not going to be dropping the F-bomb on AMC, which is fine. It’s not like if no one ever said the “f” word in WALKING DEAD the comic book, people would miss it.
I think the best way to put it is if you have ever watched BREAKING BAD…. they push the limit in BREAKING BAD quite often. There’s severed heads on the back of turtles, there’s liquefied bodies falling through ceilings, somebody just got their head blown off recently. I don’t want to spoil anything, but there’s very graphic nasty stuff that’s on BREAKING BAD all of the time and the thing that I was very excited to learn about AMC is that there is no limitation to how much of that you can have per episode or per hour or per minute.”

With special effects to be done by KNB, there should plenty to keep fans of the comic book and horror fans happy.
Check out the link above for many more details about the upcoming 6-part series.