Lost in distribution limbo, this slasher film is entertaining but not the holy grail promised by early reviews. 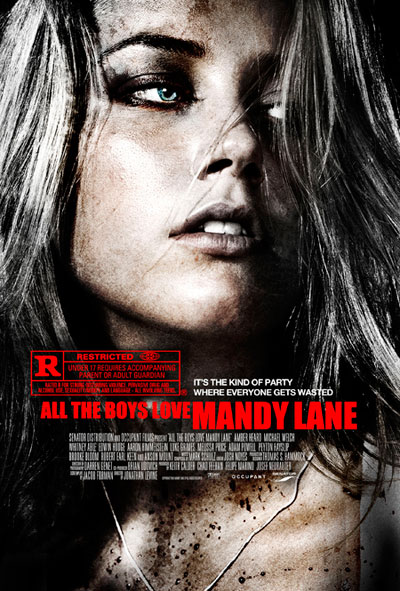 Director Jonathon Levine’s ALL THE BOYS LOVE MANDY LANE, starring Amber Heard (ALPHA DOGS), earned some enthusiastic buzz when it screened at the Toronto Film Festival in 2006 (Scott Weinberg called it the first “thinking man’s slasher film”), but that hasn’t helped the independent film find its way to American audiences. ALL THE BOYS LOVE MANDY LANE was released over a year ago in the UK, but despite distribution deals with a couple of American companies, horror fans in the U.S. are still waiting for so much as a Region 1 DVD; most recently, a theatrical release announced for this Friday was abandoned by Senator Distribution. Fans have been told they’re missing out on seeing the ‘best modern slasher flick since SCREAM’ (according to Cinematical’s James Rocchi), but does ALL THE BOYS LOVE MANDY LANE live up to the hype?
Mandy Lane is every teenage boy’s fantasy. She’s blonde, she’s beautiful, she’s innocent, and she’s unattainable. So when Mandy and her best friend Emmet [Michael Welch, better known for his part as Bella’s faithful friend Mike Newton in Twilight] are invited to a pool party (well actually, Mandy is invited and insists that Emmet tags along), all the boys are hoping to score. School jock Dylan, desperate to get into Mandy’s pants, is egged on by Emmet to impress Mandy by jumping off the roof into the pool. Predictably it ends in tragedy, and that’s the last we see of Dylan.
Nine months later, Mandy is still the object of every boy’s desire and all they can talk about is getting ‘first dibs’. Here, the movie is slow to heat up, spending some time setting up the characters. Nice guy Bird (Edwin Hodge), Party Animal Red (Aaron Himelstein), wannabe playboy Jake (Luke Grimes), the obligatory slut Marlin (Melissa Price) and bitchy Chloe (Whitney Able) create the archetypal group of horror movie teenagers. The only character missing here is the comedy sidekick. Most good horror movies have an element of fun, and it is here that All the Boys Love Mandy Lane is lacking, and because of this, it appears at times, as if the film is taking itself a little too seriously.


The group celebrate the end of junior year, by heading off for a few days of madness and mayhem at Red’s ranch. Surprisingly, innocent, virginal beauty Mandy is happy to head off into the middle of nowhere with her rebellious group of friends. It quickly becomes apparent that she not only has to fight off all three boys, who are trying to charm her into bed (some with more finesse than others), but there is also a killer on the loose.
The killings here are not particularly inventive, though there are one or two cringe-worthy deaths. It’s a shame that whilst introducing the characters early on, the writer didn’t create at least some good qualities as it would have made me care more about them dying. At no point did I feel the terror that these teenagers were experiencing, and this was because the victims were taken so quickly that there was not enough time to build the suspense. Older movies in this genre, notably the Friday the 13th series build the tension by having the maniac chasing his victims, whilst they bumble around stumbling over the bodies of his previous kills. As All the Boys Love Mandy Lane borrows heavily from its predecessors, it’s a shame it didn’t borrow more of this tension.
Handsome, mysterious ranch hand, Garth (Anson Mount) is the first to fall under suspicion….because he has a gun. Of course, we all know it isn’t going to be that obvious, but the real killer is revealed surprisingly early on in All the Boys Love Mandy Lane. That doesn’t mean we won’t get a surprise twist at the end though.
There’s nothing particularly new or extraordinary about All the Boys Love Mandy Lane. It’s another slasher movie, with a group of teenagers heading off into the middle of nowhere. Drink, drugs, and sex follow, and as any horror fan knows when you mix those ingredients together, things can only end badly. This film does, however, spend some time focusing on the hang-ups of today’s teenagers, who have issues with pecker size, body fat, and even pube length (I kid you not!). It’s reasonably well acted, and once it got going, it did keep me watching.
The photography has a grainy bleached-out look to some of the scenes, lending an up-to-date feel and helps to give the illusion that we have not seen this all before. Compared to others in this genre, All the Boys Love Mandy Lane does not deserve to be ranked as highly as the classics, but it has certainly earned a place in any horror connoisseurs DVD collection, if only for that twist……
ALL THE BOYS LOVE MANDY LANE (2006). Directed by Jonathan Leviine. Written by Jacob Forman. Cast: Amber Heard, Anson Mount, Whitney Able, Michael Welch, Edwin Hodge, Aarn Himelstein, Luke Grimes, Melissa Price, Adam Powell.
[serialposts]