An interesting if ultimately unsatisfying attemp to extend the franchise

After the disappointing ALIEN 3, this fourth film in the franchise represents a marked improvement, but it fails to match the level established in the first two films. The premise is interesting, and the visuals are entertaining, yet somehow the film never quite gells. Still, you have to give points to everyone involved for trying so hard.
Part of the problem is that, with familiarity setting in, what once seemed “alien” now seems almost ordinary, making it difficult if not imposible for this third sequel to ratchet up the level of dread that marked Ridley Scott’s original ALIEN. Of course, the other obvious hurdle is that the previous film killed off the lead character, Ripley (Sigourney Weaver), and any attempt to bring her back was bound to feel like a phony Hollywood contrivance.
Fortunately, ALIEN: RESSURECTION makes a decent effort at retaining some integrity while providing some decent thrills and ideas. Screenwriter Joss Whedon works hard to justify the existence of the new film, and he actually comes up with a few interesting wrinkles; the most clever is bringing back Ripley not as the familiar character we know, but as an alien-hybrid clone. Thus, the script actually manages to take this obligatory plot device and turn it into something interesting: a meditation on the nature of identity.
Weaver makes the most out of her new role; she gives a wonderfully ambiguous performance as the resurrected Ripley, part human and part alien, emphasizing her enhanced strength and sensory powers without ever quite turning the clone into a comic book superhero. The supporting cast does a good job of portraying grungy space truckers, conspiratorial military types, and demented scientists; in fact, the film almost captures a sense of working-class squalor to rival the original.
French director Jean-Pierre Jeunet jumps into the alien universe as if he were born to it; he fills the frame with enough of his trademark, memorable visuals to give this entry in the series its own distinct personality; the imagery is twisted and warped but always fascinating (especially when the cloned Ripley, with a #8 tattooed on her arm, encounters a lab containing the seven previous, aborted attempts).
There are a few problems, however: as in ALIENS, the creatures’ acidic blood is ignored whenever it is inconvenient (numerous beasties explode without breaching the hull or even spattering the nearby humans); Winona Ryder’s role as the obligatory android is under-acted; and the thematic exploration of Ripley’s new identity is abandoned once the monsters run amok. Fortunately, Weaver’s performance and Jeunet’s stylings help mitigate these weaknesses, making this an entertaining if not completely satisfying continuation of the ALIEN franchise.

ALIEN: RESURRECTION ends with a Newborn alien (more or less the child of the Ripley clone) being sucked out of a tiny hole in the spaceship’s hull by the pressure of escaping air (rather like a more grizzly version of the villain’s demise in GOLDFINGER). A similar idea had been considered for the first ALIEN (1979) but was abandoned because of budget constraints.

The name of H.R. Giger, the Swiss artist who not only designed but also sculpted the original creature in ALIEN, was omitted from the credits when ALIEN: RESURRECTION was released theatrically. His credit for was restored on home video versions of the film. This was not the first time Giger had trouble with his credit on an ALIEN film: although he worked on new designs for ALIEN 3, his credit in the film read “original alien design,” making it sound as if the film had simply re-used his designs from the original film.
Screenwriter Joss Whedon (the creator of BUFFY THE VAMPIRE SLAYER) was apparently not happy with the way ALIEN RESURRECTION turned out. Although this is the fourth film in the franchise, in at least one interview he emphatically made the point of referring to the “ALIEN Trilogy,” as if ALIEN RESURRECTION doesn’t count (quite a harsh criticism, when one considers how disappointed most viewers and critics were with ALIEN 3).
This was French director Jean-Pierre Jeunet’s first English-language film, his first solo directing effort (his previous features DELICATESSEN and CITY OF LOST CHILDREN were co-directed with Marc Caro), and his first major Hollywood production. After having had to deal with the constraints of working within a studio system, where he was a hired hand obligated to supply a product for his employers, he went back to France and decided to work on a personal film. The result was the wonderful AMELIE. 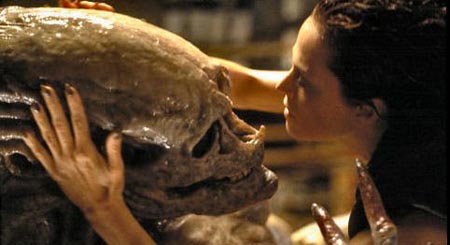