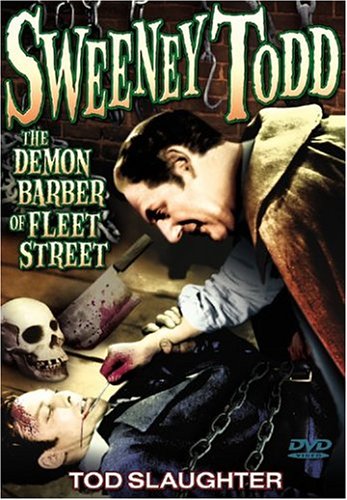 All of this, however, fades to nothing but dim shadows, eclipsed by the glorious villainy of Todd Slaughter. Hardly a subtle actor, maybe not even a very good one, he was perfect in this niche – a conniving, dastardly villain without a shred of conscience or decency, smooth-talking his victims with delicious feigned sincerity until the mask slips, reveaing the devil behind the disguise. “You have a beautiful throat for a razor, sir. Oh, how I should love to polish you off!” The performance very nearly ranks with Bela Lugosi’s wonderful turn as Murder Legendre in WHITE ZOMBIE (1932).

As a piece of cinema, the 1936 SWEENEY TODD is a triffle compared to Tim Burton’s wondrous big-budget version, but as a chance to see Slaughter at the apex of his career, performing a far more evil version of the character, it deserves to be seen, and horror fans would be well recommended to give it a gander.
SWEENEY TODD: THE DEMON BARBER OF FLEET STREET(1936) Produced and directed by George King. Screenplay by Frederick Hayward and H.F. Maltby, based on the play by George Dibdin-Pitt. Cast: Tod Slaughter, Stella Rho, John Singer, Eve Lister, Bruce Seton, D.J. Williams.
RELATED REVIEWS: Sweeney Todd (2007)

3 Replies to “Sweeney & Slaughter: A Tale of Two Tod(d)s – Retrospective”